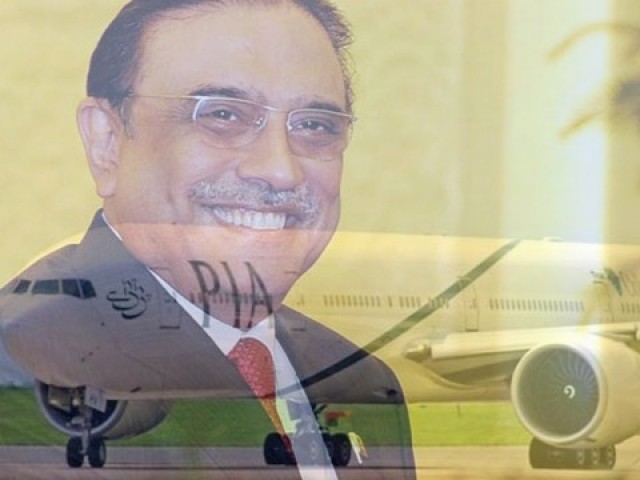 Rumour has it that PIA is purposely being run into the ground to benefit the President's sister Faryal Talpur.

This article is not written with the intent of defending President Asif Ali Zardari or his party.It aims to illustrate how the hyper personalisation of politics and governance in Pakistan has created unachievable expectations for quick fixes, based on overly simplistic explanations of state failure.

Pakistan International Airlines (PIA) is an illustration of perhaps the biggest disservice the president has done for his country; he allowed himself to become a lightning rod for every explanation of state failure. By explaining the poor performance of the state to the person who occupies the Presidency, we overlook the many structural, underlying and historical reasons that perpetuate state failure.

The dominant narrative which explains the mess that PIA is currently stuck in, is that the national carrier is purposely being run into the ground so that Indus Airway, linked to the president’s sister Faryal Talpur, can benefit. In fact, it appears that Abdul Wahab, the man behind Karakoram Motors is the lead investor in Indus Air.

On Wednesday, a Riyadh-bound flight from Lahore was just cancelled only because a 9-volt battery, used to operate one of its emergency gates, was found out of order, provoking the passengers who vent their anger on the airport administration.

I am not sure about everybody else, but if this happens with me, I would want my plane to be grounded when its most crucial component that facilitating emergency exits is out-of-order. Granted, PIA could do a better job to replace the offending part on time and improve preventative maintenance. However, given the news, Facebook and Twitter lit up with commentary on how PIA is purposefully sabotaging and compromising its own aircraft to serve the president’s interests.

A couple of months ago, rumours circulated that the increased frequency of emergency landings  by PIA were being orchestrated to tarnish its image and reputation. Investigation should be carried out to find out if poor maintenance and incompetence has led to an increase in emergencies. Why would experienced pilots risk not only their lives and licenses but also the lives of their crew and passengers by “orchestrating” emergency landings?

PIA faces many challenges like global economic depression, rising fuel costs, stiff competition, massive labour costs and  inefficient vendor supply chains, to name a few. It also has to deal with the recruitment of skilled staff to Gulf carriers while there is a drought in airline financing and the poor image of Pakistan negatively affecting its ability to attract passengers from other countries. It’s ironic when an airline cannot upload an accurate destination map. And it doesn’t help either when the MD of that company states that: “pilgrims should be thankful for travelling in aircraft, rather than on camels”!

However these issues,  incident by incident are overlooked and reduced to the now ubiquitous explanation that PIA’s failures are a result of Zardari’s greed.

PIA is managed under the Ministry of Defence (MoD) and the MoD for all practical purposes is under the influence of the military. Does the cosy relationship between the regulator, the CAA and PIA not lead to a conflict of interests? Speaking of the military, why do we overlook how the military run NLC has contributed to the railway’s decline?

Zardari and the PPP are rightly criticised for mismanagement and poor governance. However, decisions that influence the well being of the state organisations  or require the allocation of tax payers resources must be made on the basis of a rational and impassioned analysis. Not doing so creates the illusion that only PPP’s exit will lead to an improvement and also imposes improbable expectations on the government that will follow.

Whoever comes into power after Zardari will have to meet the expectations of a society which has been made to believe that every ill faced by the nation is the result of  the greed and incompetence of one individual. A nation misinformed by political parties, commentators and the media, is then unable to accept the necessary reforms that our state owned enterprises require. Will getting rid of the PPP and Zardari be enough?