Public hangings: Two wrongs do not make a right 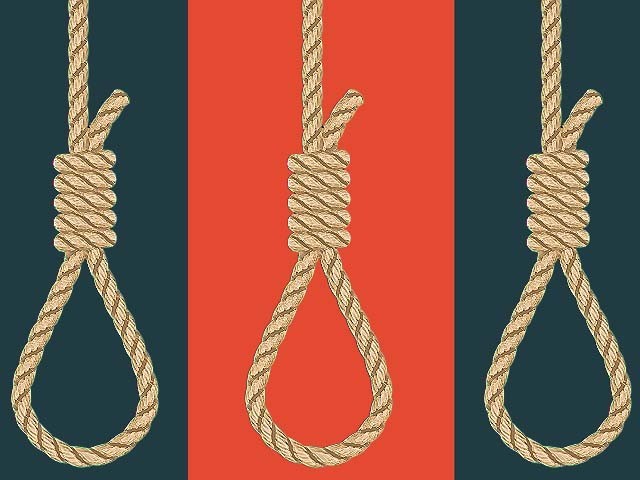 On Friday, February 7, 2020, Minister for Parliamentary Affairs Ali Muhammad Khan, delivered an impassioned speech, proposing the public hanging of those who have been found guilty of abusing children. The resolution moved by him, which also earned him a lot of praise on both social media and in the house, was passed by the parliament with a majority vote. Fortunately, Minister for Science and Technology Fawad Chaudry and Minister of Human Rights Shireen Mazari immediately condemned and disowned the resolution passed by the parliament in support of public hanging.

Before Khan decides to move a bill with a view to make this resolution a part of law, he should certainly undergo a briefing from the Foreign Office as well as the ministry of law and justice in order to understand and appreciate the consequences Pakistan will face if public hanging is codified into the penal code, not to mention the adverse impact it will have on our image in the international community.

Amnesty International has already publicly condemned this resolution, a condemnation which has been read by millions of people. At a time where we all are striving to turn the world’s focus towards the barbaric measures adopted by the Modi Government against the people of Indian occupied Kashmir and the treatment of those protesting against the Citizenship Amendment Act (CAA) and the National Register of Citizens (NRC), the last thing we need is to publicly hang a convict.

We must also keep in mind that Pakistan has signed and ratified numerous international conventions which categorically denounce such punishments and rightly so. Article 16 of the United Nations Convention against Torture and Other Cruel, Inhuman or Degrading Treatment or Punishment, which was ratified by Pakistan on 23rd June, 2010, clearly restricts its signatories from publicly hanging convicts, irrespective of the crime they have been found guilty of.

Additionally, in the case of Muhammad Ameen versus the Government of Punjab and others, reported as PLD 2019 Lahore 330, the Lahore High Court dismissed a petition where the applicant requested the court to direct the Government of Punjab to publicly hang Imran Ali who had raped and murdered Zainab, a six-year-old toddler from Kasur . The judge of the Lahore High Court, held as follows:

“…undoubtedly, the crime in which the accused has been found to be guilty is barbaric and it is shameful for any civil society which no society should tolerate but a barbaric crime does not have to be visited with barbaric penalties such as public hanging. The Court has always to act in accordance with the principle of law and must confine itself within the parameter laid down by the Constitution.”

This clearly signifies that public hanging is not compatible with our constitution and so, cannot be allowed. Our frustration and anger at the repeated instances of child abuse is undoubtedly warranted. These vicious barbarians, who have committed heinous crimes against our children, should be punished swiftly. Regardless, we should also be angry at our political representatives for failing to identify and address the numerous and obvious shortcomings of our criminal justice system. Anyone and everyone with a rural background will already be well aware of the thana kachahri culture and who benefits from it. At times, first investigation reports (FIRs) are lodged against innocent people in order to exert undue pressure, while at other times it is almost impossible for an ordinary person to lodge an FIR against an individual, simply because the guilty party is influential.

There is only one lasting solution to deter individuals such as Ali from committing crimes against minors and that is for us to hold our political leadership accountable. We must take them to task whenever such an unfortunate incident occurs, find out as to why the police was unable to prevent it from happening and not allow the government to get away with distractions such as the suspension of the concerned police officer.

An entire body of laws exist in Pakistan which guarantee the protection of our children, including Balochistan Child Protection Act, 2016, Sindh Child Protection Authority Act, 2011, Punjab Destitute and Neglected Children Act, 2004, Khyber-Pakhtunkhwa Child Protection and Welfare Act, 2010, Zainab Alert, Response & Recovery Act, 2019, to name a few. Moreover, the Pakistan Penal Code and Criminal Procedure Code have also been amended accordingly. Child pornography has been criminalised and the death penalty has also been imposed for those found guilty of raping a minor. However, the lack of implementation of these laws and acts is simply appalling. A perfect example of the lackadaisical attitude of governments, both past and present, towards this issue is that the K-P Child Protection and Welfare Commission (KPCPW) is still operating without a chief. In short, Pakistan is not suffering from an absence of law, but in fact, from an absence of political desire to improve our enforcement mechanism and machinery.

Let us for a moment imagine that this resolution gets the backing of law and we are to witness the first public hanging in Pakistan after the turn of the century. Let us set the stage in Lahore, and what better place in Lahore than the Minar-e-Pakistan which is, after all, a symbol of the struggle against oppression. It is safe to assume that a lot of people will be in attendance along with Minister Ali Khan, so we ought to have a large expanse that can accommodate everyone. In order to envision how the day’s events would unfold, we need to refer to the last public hanging carried out in the United States of America that took place on May 1, 1936 when Rainey Bethea, who had been convicted of raping and murdering a 70 year old woman named Lischia Edwards was put to death. Roughly 20,000 people were in attendance when Bethea was hanged in Owensboro, Kentucky, a city whose estimated population was 25,000. Certain news outlets reported that there was a carnival like atmosphere and so, used headlines such as “They ate hot dogs while a man died on the gallows” and “Children picnic as killer pays,” which was The Boston Reveller headline. Once Bethea was hanged, people rushed towards his body, still hanging from the trapdoor of the gallows, and took as souvenirs pieces from the hood covering his face that they ripped off with their bare hands. It was only 18 months after this barbaric show that the governor of Kentucky signed a bill outlawing public executions.

If only someone had the gall to table a resolution in the parliament against political intervention in the police department, inept state prosecutors and the lack of professionalism within our investigation agencies. Such a courageous step could be just the spark we need to galvanise the parliament towards concrete steps that could address the inadequacies of our criminal justice system. The government must enable agencies, through training and funding, to track the activities of pedophiles so that potential rapists can be caught before they act on their criminal desires. Furthermore, the entire prosecution process needs to be improved for an observable change to occur.  Once alleged rapists are caught, the process of investigating and collecting evidence should be streamlined by law enforcement agencies in accordance with the law and international practices. Cases should be effectively established before the courts of law. For this, qualified and competent lawyers should be hired as prosecutors. Simply put, if these rapists are prosecuted properly and know that they will not be able to evade justice, it may actually act as a deterrent.

If the intention behind this public hanging resolution was to deter people from committing such barbaric acts, then one can perhaps empathise with the honourable minister’s sentiment. However, with all due respect, this cannot be entertained as a solution to this menacing problem. Ultimately, public hangings will, at most, be gimmicks that will divert the attention of the common man from the real problems which are the shortcomings of the government, law enforcement agencies and the justice department.