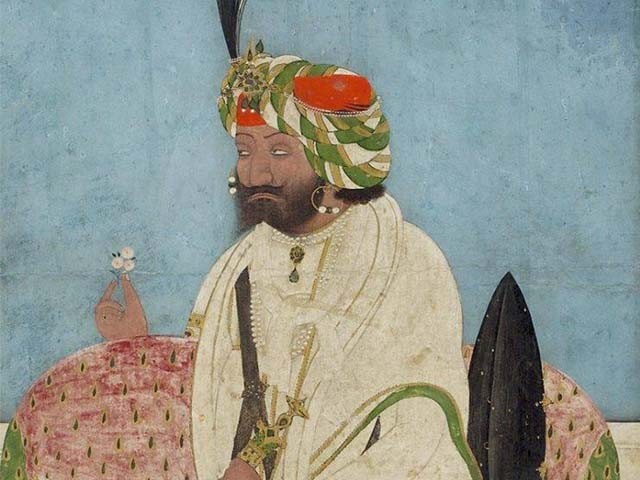 Kashmiris ruling Kashmiris. Undoubtedly, a novel concept, not only to modern day Pakistanis and Indians, but to historians as well. It is ironic and equally unfortunate that for the past 400 years or so, Kashmiris have been subjected to the reign of non-indigenous ruler, be it the Mughals in the late 1500s or the Dogras pre-partition.

Most rulers saw Kashmir as nothing more than a comfortable summer retreat and so, ignored the plight of the local populace which was, by most accounts, quite poor. However, the demeanour of the Dogra dynasty towards the Kashmiris was essentially that of an owner’s treatment of its unruly cattle, as highlighted by British explorer, William Moorcroft.

Before the Dogras took over the northern territory, it was ruled by the Sikhs. Gulab Singh Dogra was the raja of the Jammu expanse during the Sikh rule. However, he chose to side with the British when they attacked the Sikh Empire, therefore, it would not be inaccurate to brand Gulab Singh a turncoat. Ultimately, when the Sikh Empire was resoundingly defeated by the British in 1846, Gulab Singh was sold the Kashmiri territory for a paltry 7.5 million rupees under the Treaty of Amritsar by the British as reward for his treachery.

When the Sikh-appointed governor of Kashmir, Sheikh Imamuddin resisted Gulab Singh’s forces, the British sent a contingent of its armed forces under the command of Major Henry Lawrence to aid Gulab Singh and remove the governor. The governor eventually surrendered and Kashmir was formally handed over to Dogra, thus marking the end of the Sikh Empire’s rule in Kashmir and the beginning of the Dogra Dynasty.

Gulab Singh himself died in 1857, but the Dogras continued to rule Kashmir and the nearby territories. However, as time went by, the Kashmiris, for the most part, continued to live in squalor. Their condition was so alarmingly poor that at one point, the then Viceroy Lord Lytton expressed his concerns to London in a letter dated February 25, 1880 where he stated that the Kashmiri people were “systematically oppressed and depressed.” He also stated that the British had a moral responsibility to the Kashmiris because it was they who had essentially installed a ruler that was “alien to them(the Kashmiris) in face and creed.”

Ironically, this is the same viceroy who did not feel the need to intervene in Madras during the famines between 1876 and 1878, leading to the deaths of approximately five million people. This goes to show that even a cold hearted laissez-faire viceroy such as Lytton recognised the plight of the Kashmiris, exemplified by tyrannical measures such as the locals being banned from owning land and a paltry fine of approximately 20 rupees being imposed as punishment for a Kashmiri’s murder.

Fast forward roughly 45 years after the letter was written, the situation in Kashmir was no closer to improving. The territory was still under Dogra control led by Maharaja Hari Singh Dogra, who had taken over the reins in 1925. By this time, the resentment amongst the local Muslim populace had nearly reached boiling point. Signs of the same had existed as early as 1865 when Kashmiri shawl weavers began agitation against the crippling taxes that had nearly brought the shawl industry to its knees. This peaceful agitation was dealt with swiftly by the full force of the Dogra army.

However, it wasn’t until 1931 when revolutionary movements actually gained tangible momentum.
During a protest against Dogra tyranny in Srinagar, a young employee of a British army officer, Abdul Qadeer made an impassioned speech, calling for the Dogras to be overthrown. He was promptly arrested on charges of sedition. However, in an unparalleled act of defiance, thousands tried to enter the jail to free Qadeer during his trial on the 13th of July, 1931. Dogra forces with the help of the British-Indian military quelled the miniscule uprising by firing indiscriminately at the crowd and killing at least 20 people. This ultimately sparked a series of concerted efforts for freedom such as the Quit Kashmir movement that ultimately culminated in the Poonch Revolution of 1947. When the British decided to leave India in August of 1947, Hari Singh lost crucial support that he needed to keep Kashmir under his grip. He could no longer call on the military might of the British Indian military.

On the other hand, the Muslim majority from Poonch had begun concerted efforts to oust the maharaja. They had shown their inclination towards Pakistan which was opposed to Hari Singh’s intention to declare independence. Hari Singh Dogra was already wary of Poonch’s ability to offer concrete resistance, since he saw that a sizeable population of ex-servicemen from the British army resided there during his visit to the region on April 21, 1947. The anti Dogra agitation had already cemented itself in the form of the ‘no-tax campaign’. Dogra forces moved to quash this campaign through violence. This ultimately turned the uprising into an armed revolt by the end of August 1947, lead by Sardar Abdul Qayyum, a 24-year-old with Indian military experience.

Promptly, shoot on sight orders were issued to officers belonging to Dogra’s army on September 2, 1947. According to an estimate, anywhere between 70,000 to 200,000 Muslims were killed during what is deemed a “systematic extermination.” Thousands of Muslims fled to the newly formed state of Pakistan and so, the numbers of Muslim, who were in a majority in Jammu, significantly fell. However, Hari Singh began to realise that he was slowly losing his grip over the region, especially when the area’s Pushtuns joined the revolt. He knew that his dream of a Muslim minority containing, independent Kashmir would never be realised and that, if he did not enlist the support of India, he would soon be overthrown and subsequently killed. As a result, he seceded to India against the wishes of the Muslim majority and the Indian army entered Kashmir on October 27, 1947.

Certain historians claim that it was the involvement of Pushtun tribes from adjoining Pakistan, supported by the Pakistani state that forced Hari Singh to run to India. However, Australian researcher Christopher Snedden states that it was local “Sudho Zai Pathans” that came to the aid of their Kashmiri brethren. He also goes on to write that:

“Poonch Muslims had the capability, given their military abilities and experiences, and the intent, given their anti-Maharaja grievances, to foment and sustain anti-Maharaja actions themselves. They did not need any Pakistani encouragement or assistance.”

Therefore, regardless of whether they intended on becoming independent or whether later they would have rather joined Pakistan, one thing is crystal clear; they never wanted to become subservient to Indian occupation and that is why they continue to challenge India tyranny because for centuries, they have opposed those who wanted to oppress them and will continue to do so until they achieve what they set out to do almost a hundred years ago through the Quit Kashmir movement.