The coronavirus epidemic in the eyes of a foreign student 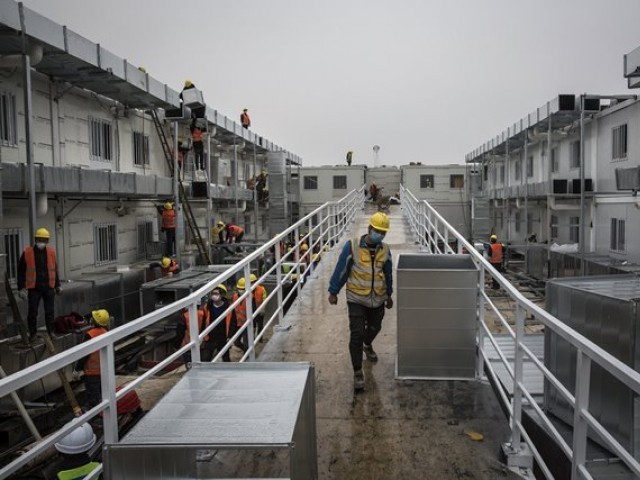 Construction on the Huoshenshan Hospital in Wuhan, China- Getty Images

I have been living in China since September 2018 and felt compelled to write this piece, following the aftermath of the coronavirus outbreak in China and especially to address the concerns of those watching from the outside. Many families are also concerned about the wellbeing of the Pakistani students quarantined in the country. However, I firmly believe that if any government can handle an outbreak, it has to be Chinese.

My time in the country has reinforced my belief in the prowess of the Chinese government to the extent where I volunteered to stay back to follow the travel ban and ensure I do my part to control the spread of the disease. The government is taking all steps possible steps to ensure that not only its citizens but also foreigners are well taken care of during this difficult situation. There is no discrimination in the care and treatment meted out to the people and the government is trying their best to provide the best facilities they can to all those affected. The only thing they ask for in return is cooperation and that people follow instructions.

The foreigners present in China seem to be in more panic than the locals here. I suppose that is, one, because China has already dealt with the SARS virus outbreak in 2003 and are well equipped to handle another illness of alarming magnitudes. Secondly, the trust that the local populace places in the government is really high.

It is no secret that China lays great emphasis on important dates such as the Chinese New Year followed by the spring festival. This year was no different. The country was teeming with decorations and various activities were planned to celebrate the occasion. Despite not being prepared for the calamity at all, it was heartening to see how quickly the Chinese government changed gears and went into disaster management to mitigate the situation.

The day the first coronavirus case was discovered, high level research labs were set up with the help of eminent Chinese and foreign researchers to work on data collection on the virus and eventually a cure.

Since this was the first strain of this kind and was rapidly developing into pneumonia, the government promptly issued a handbook titled 2019-nCoV Pneumonia Control and Prevention to educate its people.

Not only did the government share all information with its people, it was also prompt in sending the research and related information to the World Health Organisation (WHO).

Since the virus originated in Wuhan, the city has been quarantined since January 23, to prevent the spread of the virus. The frequency of transport inside the city has also been reduced. The same steps were replicated in other cities affected by the virus.
On January 24, at least seven of China’s major cities had imposed health emergencies and bus services were suspended.

Health checks were made mandatory at both railway stations and airports, whereby anyone found with a slightly high temperature is immediately bundled to the hospital. In addition health check booths have also been installed at universities, malls, hostels and other buildings. Check-ups and subsequent treatment for the virus are also being offered for free.

If any person suspected to be infected by the virus has been able to travel despite the security checks, their information is shared so that people who may have been on the same plane or train can be get themselves checked.

The Communist party also called an emergency meeting and formulated a committee to closely monitor the situation.

All holidays to schools and colleges have been extended and students have been asked to not return till further notice.

The government also launched a war footing effort to construct a hospital aimed at tackling the virus in just six days. But with the growing numbers of patients, they announced that two more hospitals will be built and inaugurated by February 2 and 5.

It took the Chinese government two days to establish laboratories, which are equipped to conduct tests on over 2,000 samples, despite the fact that it takes six hours for a single sample to be tested.

Online tests have also been made available due to the lack of hospital space and to prevent crowding of said hospitals.

Medical equipment manufacturers have also doubled down in this time of need and many of them are working ahead of schedule to make protective clothing, masks and other equipment to ensure the supplies do not run out. Many doctors have volunteered their services themselves.

Another thing that gives me hope is the reaction of the Chinese people. They are not panicking and are certainly doing all that they can to support their government. Whether it is in the form of monetary support and donations or just in the form of following instructions, the Chinese nation is there for its government. Thus far, the people have given up to $20 million to its government while at least 1.8 million safety suits have also been manufactured on a war footing basis. Another thing that the Chinese populace is doing, is helping control panic by not posting negative outlooks on their social media sites.

All university administrations are constantly in touch with students remaining on campus. Special wechat groups have been set up so data can be collected. The students are also required to take mandatory health checks so that any signs of the viral infection can be timely monitored.
If students have any problems or need medical attention, they can also reach out to the administration on these groups. Beefed up security checks are in place to ensure that no infected person can enter campuses, while instructions are given regularly to ask for cooperation. The Party Central Committee, Ministry of Education and the Beijing Municipality are all focused on the safety of students and teachers first.

In addition WHO Director General Tedros Adhanom Ghebreyesus spoke at the emergency meeting held by the committee on January 22, 2020 and said that he does not recommend the evacuation of nationals, and called on the international community to remain calm and not overreact.

Despite the bleak picture painted by the numbers of infected, the first patient to be diagnosed with the virus, was released from the hospital after he was cured on January 29. Three more medical workers, diagnosed with the virus, were discharged a day before. By January 30, Chinese researchers had found three existing drugs that were very efficient in targeting the virus at a cellular level. All three drugs are now under relevant procedures to gain approval for clinical use. Better equipped kits have been approved in the country, while utmost care has been put into ensuring the cash supply needed to combat the virus does not slow down.

China is doing all that it can to ensure that the virus is contained and that cures are looked into as soon as possible. At this difficult time, I would suggest we all play our part to support the Chinese government and stay put till the air clears to ensure not only our safety but also the safety of others that we may pose a risk to.

Nadia is a Pakistani student at the University of International Business and Economics in China since 2018.