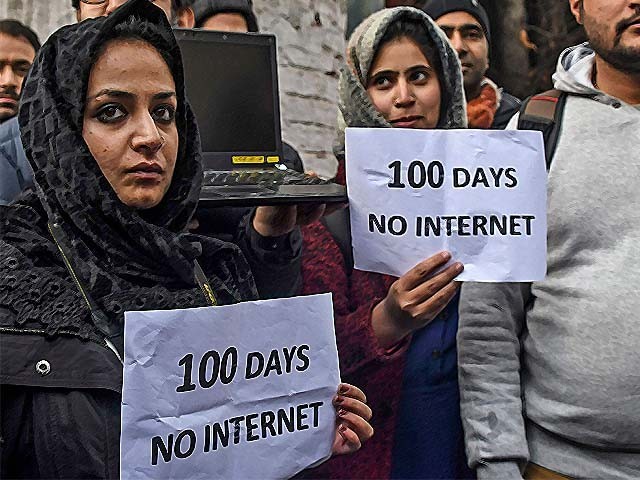 Since 2012, Indian-occupied Kashmir (IoK) has been witnessing the deliberate disruption of internet connectivity, cell phone services, and access to social media on an increasing scale. These disruptions are caused by the Indian authorities who allege that these services spread rumors and ‘fake news’, providing outside forces with a chance to disrupt the internal situation in Kashmir; thereby giving rise to violent protests. In order to prevent rumor mongering, the authorities claim that these deliberate blackouts, the longest of which have occurred in Kashmir as compared to any other part of India, are useful in pacifying or preventing the protests. However, no empirical evidence to support this assertion has been presented till now.

Ironically, whenever the situation across Kashmir turns violent, the first step the authorities take is to deliberately disrupt internet and mobile phone services, leaving the masses in a complete state of chaos. This, it seems, is their ultimate solution to the problems currently escalating in Kashmir. Consequently, this blocks the flow of information, cutting Kashmir off from the rest of the world. It is pertinent to mention here that the government can order the telecommunication authorities to shut down the internet and telecommunication services at anytime since the law is presented as a sort of preventive measure to control any untoward situation in Kashmir; thereby justifying the blatant ban on the internet. In light of this, people in the region sarcastically comment,

“Can you name anything which hasn’t been banned in Kashmir yet?”

With each passing year, Kashmir witnesses an unprecedented rise in the number of protests which result in deaths and injuries, thus further enraging the youth and forcing them to take extreme steps, thereby giving rise to militancy in the region. The Indian government, rather than understanding the basic problem that escalates the violence, imposes a ban on communication in an attempt to sell their version of the truth to the outside world by either blaming neighbours for the chaotic situation or the locals, who they claim fall prey to Pakistani propaganda. This has been the major excuse used by the Indian government when justifying the information blackout.

Nearly six months have passed since the government abrogated Article 370, the part of the Indian constitution which granted semi-autonomous status to this region. Kashmir has been stifling in a state of information blackout since then, with citizens only having limited access to a few government websites and limited internet connectivity. This blatant ban on internet services is impacting the economy too. A survey estimated that the Kashmir economy lost INR 17,878 crore in the first four months after Article 370 was repealed. If the internet blockade continues, those who are dependent on it will be out of work. While sporadic internet access has been restored in some parts, I am still hoping that someday the ban may be lifted fully since the current situation is causing disproportionate harm to the people who earn their money doing freelance work on the internet. Only partial access to a few sites has allowed me to quickly write and send this article.

In 2016, when Prime Minister of India Narendra Modi visited Kashmir he stated that youngsters should be holding laptops instead of stones and guns. The statement came in response to the people who were taking up arms and challenging the legitimacy of India’s rule in IoK. Modi has been saying since then that the future of Kashmir will remain in the hands of India, and that the youngsters of Kashmir should engage in dialogue instead of violence.

Ironically, whenever youngsters in Kashmir try to engage in dialogue, the authorities clamp down on them for ‘dissent’. Many who voiced their discontent on online platforms have been detained under draconian acts while some have been accused of hate speech. Hence, the possibility of using our laptops, as Modi suggests, has also become increasingly impossible. In his speeches, Modi says that the youth is the future of the nation and encourages them to launch their own start-ups. I want to ask him, how is it possible for us to launch start-ups and business ventures when the government is blocking internet access? Consequently, being a computer graduate in Kashmir has now become a serious problem due to the limited jobs available in that field.

Despite the news which has been circulating from day one that the situation in Kashmir will soon return back to normal, I am shocked to see the ban continuing with an amendment that grants Kashmiris access to certain websites; event though the Supreme Court of India has recently issued an order stating that access to the internet is a fundamental right and the internet ban in Kashmir must be reviewed. So far, the government has white-listed 300 websites, with limited net connectivity. I am confused as to why they are blacklisting the others. The authorities should understand the pain of the people who suffer because of these information blackouts, forcing locals to use VPNs to bypass the ban imposed on websites. Clearly, the government’s claims of a “digital India” are ringing hollow. Recently, security forces have also started checking mobile phones to see if people are using VPNs, and reportedly a student in IoK was beaten when VPN apps were found on his phone.

Perhaps the Indian authorities only see the internet as a social media tool used to spread ‘propaganda’, but the value of internet connectivity in the 21st century is much more than that. In light of all this, the persistent ban on the internet is clearly a sinister act and one which has crippled life in Kashmir.