Is it wise to evacuate the Pakistani students stuck in Wuhan? 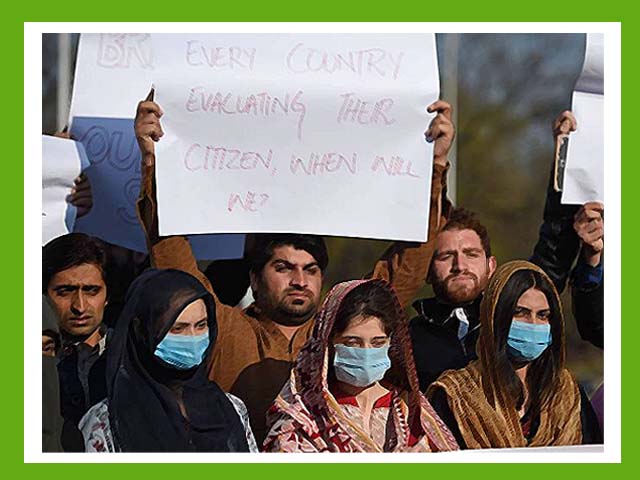 The Islamic Republic of Pakistan stands with the people of China during the devastating coronavirus epidemic in the province of Hubei, but has no plans to evacuate its citizens currently in the city of Wuhan; ground zero of the virus. Immediately after the outbreak, Wuhan was put under a curfew. The entire city was effectively quarantined.  A sizeable number of Pakistani students studying there have been appealing to the government of Pakistan, pleading that they be evacuated. Video messages of different students have been pouring in from all over Wuhan city claiming that they are living in constant fear and that access to crucial resources is becoming limited.

This issue was brought up in the Senate session on Friday by Pashtunkhwa Milli Awami Party’s (PKMAP) Usman Kakar. He highlighted the plight of the Pakistani students, stating that if the government feared that the students would spread the virus, they should form an isolation camp where citizens can be quarantined under observation till it was ascertained that they were not infected. Pakistan Muslim League-Nawaz (PML-N) Senator Mushahid Ullah questioned the efficiency of the Pakistan Embassy staff in China. He demanded that anyone and everyone coming from China directly or indirectly should be placed under quarantine at the airports as a precautionary measure.

Senator Rehman Malik from the Pakistan Peoples Party (PPP) decided to go off on an entire tangent altogether and wondered if this viral infection was an attempt at some sort of biological warfare. Regardless, he too advised the government to evacuate students from Wuhan in a controlled manner to alleviate the anxiety of the parents. On Saturday, PPP Chairman Bilawal Bhutto Zardari asked why Pakistan has not brought citizens back from Wuhan, especially since  India and Bangladesh had done so.

Leader of the House Senator Shibli Faraz said that around US $840 have been credited to the accounts of students in Wuhan by the Pakistan. The senator also reassured the house that the government is going to take the advice of the opposition into consideration while formulating a coronavirus policy, which will keep evolving as time goes on.

For now, the policy the government is adopting is “better safe than sorry,” the same policy that was aired by Special Assistant to the Prime Minister on Health Dr Zafar Mirza when he stated that Wuhan based students will not be evacuated.

When asked by a journalist as to what precautionary measures the government was implementing in case citizens return to Pakistan indirectly from China via some other nation, Dr Mirza replied that he won’t go into detail, but a comprehensive plan is in the pipeline and that a system to quarantine such citizens will be put into action.

However, so far the Pakistani students that have been evacuated from other parts of China and are suspected of being infected by the coronavirus, are telling very different tales.

Shahzaib Rahujo was studying petroleum engineering at a university in China, situated around 1,000 kilometres from Wuhan and returned to Pakistan on February 1. Unable to book a direct flight, to he had flown to Karachi via Qatar and was reportedly suffering from a headache, flu and cough when he reached Qatar for his connecting flight. Instead of going through a security check or reporting his symptoms, Rahujo decided to self medicate, bringing his fever down. He was then able to pass through the health checks undetected.
After Rahujo’s symptoms worsened when he reached his village in Khairpur, and the family found no respite at the local Civil Military Hospital, they decided to move him to Islamabad for further treatment. The family had reached the Multan Toll Plaza when they were intercepted by the Khairpur deputy commissioner and district health officer and sent back to the hospital.

Keeping such cases in mind, along with the dearth of medical facilities in Pakistan, the government’s stance regarding the evacuation of Wuhan based students is understandable, despite the significant pressure that is being exerted by the opposition and certain segments of the public for their return. The subject of whether the opposition is doing so out of the goodness of their hearts or just to antagonise the ruling party is a separate debate altogether.

Alternatively, if these students are brought back, this too will be met with fierce criticism because the risk of the coronavirus spreading amongst the local populace will increase tenfold. Simply put, the government is caught in between a rock and a hard place. A wrong move could have lasting and deadly ramifications.

Therefore, in a complex situation such as this, it is imperative that utmost care and diligence is employed when taking any decision. The Karachi airport does have a hospital that can be used as a quarantine facility, as alluded to by Dr Qaiser Sajjad of the Pakistan Medical Association. However, he was quick to add that the facility, in its current condition, is inadequate. Therefore, while one can empathise with the plight of the students and their parents, it is imperative that quarantine facilities are developed at the airport before they are allowed to re-enter the country.

If the airport suffers from area constrictions, then quarantine facilities should be setup away from city centres. During the Ebola crisis in 2014, such sites that included a defunct cardiac hospital building were identified by the Sindh Department of Health as ideal quarantine enclosures, but no concrete action was taken. If back then, these sites were developed, the government’s decision whether to bring the students back or not may have been much easier.

Regardless, slowly, but surely, the government is taking steps to deal with the virus. Mirza recently  confirmed that more than a 1000 kits to test for coronavirus have been imported. Additionally, thermal scanners have been placed at four major airports and close to 200 information booths have been setup to tackle misinformation and encourage preventive measures.

However, in any case, the real threat is not the 500 or so students stuck in Wuhan, but those individuals who continue to slip by the screening process by entering Pakistan indirectly through the UAE and other countries. They pose a sizeable danger to the local populace because in case the virus comes to populated areas, it will spread like wildfire. Therefore, the government should make it absolutely clear that any individual who slips past the authorities will eventually be brought back and put into quarantine along with all those individuals who were in physical proximity with the potential patient. This will automatically discourage people from meeting with such individuals and will increase the likelihood of them being reported to the authorities so that they are brought into quarantine.

It is also the duty of students and citizens returning from any part of China to volunteer for a health check to ensure that they are not carrying the virus and that people around them are not at risk of being infected, after all in this fight with the coronavirus, we are together.

Perhaps the only silver lining of the situation is that despite the temporary hardships that the students are facing, they are at least in a country that is focused on solutions and is able to provide adequate healthcare, as well as maintains good relations with Pakistan. Keeping this in mind, it is perhaps the need of the hour to upgrade quarantine facilities and equip the country to deal with the returning students, instead of just asking for their return without taking into account the dangers posed to them and others around them.

The writer is a political activist and a social sciences researcher. He tweets @AbbasAiShah (twitter.com/AbbasAiShah) and can be reached at [email protected]