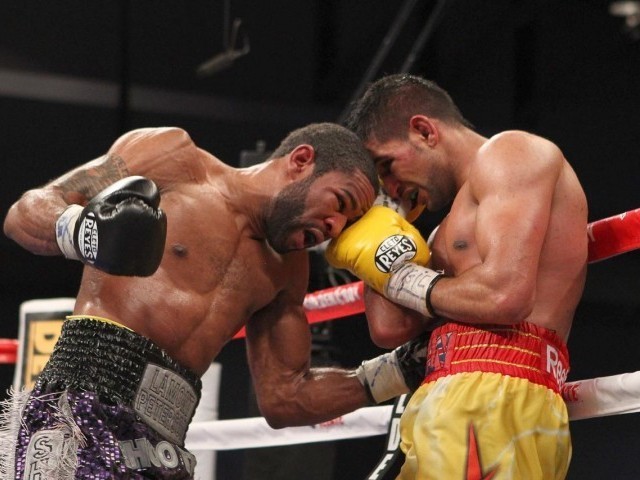 It was a great fight where the two really gave all those who watched their moneys worth PHOTO: REUTERS

We, the Pakistanis are a strange bunch. Any ill that befouls any Muslim, or so called Muslim anywhere in the world, suddenly becomes a national cause. The most recent in the sporting world is from the boxing arena, where Britain’s Amir Khan fought Lamont Peterson of the US for the International Boxing Federation and World Boxing Association light-welterweight world titles.

Amir Khan lost and Lamont won, so why such a big fuss here in Pakistan? Why is there so much media hype about racism? Why are Amir’s fans stating that ‘rightful victory’ was stolen from him?

Ah Ha! Amir, whose parents hailed from the land of the pure and settled in Britain, was declared the loser. Alright, I see that he was hard done by the referee.So? Big deal. But here is the catch; Amir is thought to be a Pakistani and that is why we are making such a big noise about the whole situation. The only other boxer who had a bigger fan following in Pakistan was the great Muhammad Ali, but then he let his skills do the talking.

It was a great fight where the two really gave all those who watched their money’s worth. At least some reporters write that it was by far the best fight of the year. The referee had some strange decisions in the 7th and 12th round where he deducted a point each for shoving and then for hitting after a break was called. Bad call and poor refereeing, I say, but not as bad as we made it out to be.

In the first place Lamont was the seven to one underdog and one, as the proverbial saying goes, ‘that had his day’. Amir should have given him a boxing lesson and won hands down. That he got such a close fight in return must have come as a shock. Lamont certainly rocked Amir with punches and counter-punches and had a good day at the office, while contrary to this Amir had an off day.

Now the referee; both sides could have protested before the fight, but chose not to, so to do so now is not quite “cricket”. He lost and that is that.

Will he get another chance? Well I certainly hope so. Will the WBC overrule the verdict? Sorry, don’t see that happening.

So now what about us here in Pakistan who support a Brit who happens to have Pakistani parents? Do we make a difference? Nay, not in the slightest. So, I say keep quiet and enjoy the outcome. Give credit to Lamont for putting up a good show and Amir for being a sore loser – oops a game loser, and us Pakistanis for creating fire where there should have been no smoke. Hasn’t this happened before? Did we care then? Can you tell me the last fighter who was hard done by the referee? Can’t, right? So, why should we react any differently for Amir the Brit? As far as we are concerned, let us try and produce a great fighter form the slums of Lyari and then cry FOUL!

A retired brigadier from Karachi who is a sports enthusiast and a self proclaimed sports analyst. Has played most games at a serious level in the Army.

Buck up Team Pakistan, or the Australians will cream you!