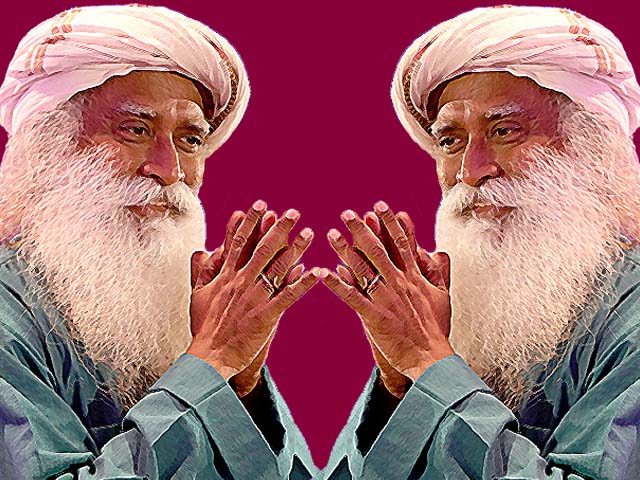 One could argue that the term ‘guru’ has come to become one of the most misused and abused words in India today. Traditionally, Indians have seen gurus as a source of wisdom, whose sage advice was often sought by kings. Ancient Indian texts are filled with stories in which rulers use the advice provided by gurus as a guiding principle when determining state policy. But it appears that this mindset has not remained confined to the past. Modern India now has its own set of gurus, and they too derive their legitimacy through political patronage. In turn, they try to endorse the political deeds of the ruling dispensation by presenting such actions under the guise of spiritual understanding and communal welfare. This collaboration has become a hallmark of the Narendra Modi regime, where both sides derive legitimacy from each other through a vicious cycle. Jaggi Vasudev is one such collaborator.

Popularly known as Sadhguru, meaning true guru, this man with a soft spoken voice and flowing white beard entered into the collective Indian consciousness and public zeitgeist with the advent of Modi. But hidden behind his calm demeanor and apparent rationality is a message laced with vitriol, prejudice and pseudoscience. Yet this dangerous concoction of his seems to have found an eager audience and rabid fan-base in India which many other gurus have failed to tap into.

For starters, Sadhguru knows exactly how to market himself, which is why he has been so successful in manufacturing a specifically tailored image of himself which readily sells. He gets interviewed by popular Bollywood celebrities who treat him with a truly bizarre sense of reverence. He has also embraced social media and regularly uploads videos for his legion of subscribers on a variety of topics, most of which he has little to no understanding of. He regularly comments on politics, science, religion, history, and gender, but in the process he only makes his own half-baked knowledge of these subjects quite apparent. Naturally, the worrying aspect here is that many individuals across the nation subscribe to the message which Sadhguru is disseminating. But this is not simply a matter of an ill-informed public figure. This is a case of a supposed spiritual figure who is using his platform to endorse the dangerous blend of Hindutva nationalism which has been on the rise ever since the Bharatiya Janata Party (BJP) came to power.

Take for instance the Citizenship (Amendment) Act (CAA), which is one of the reasons behind the protests which continue to grip India. Sadhguru (who, keep in mind, presents himself as a ‘guru’ and not a political commentator) released a video in which he argued for nearly 22 minutes that the CAA was a compassionate move on part of the BJP, seemingly unaware (or unconcerned) that the Act is exclusionary, discriminatory and the information upon which his views rest is deeply flawed. His words do not enlighten the audience but instead radicalise and desensitise them to the suffering of the victims of the citizenship law. Hence, it is perhaps unsurprising that he has also supported the decision of the BJP government to repeal Article 370. Yet, his ability to effectively package this message for an eager audience has meant that his pontifications have several buyers.

Therefore, from behind the cloak of spiritualism, Sadhguru sells the majoritarian narrative of the Modi regime and attempts to entrench communal prejudices in India. He cleverly roots the Hindutva ideology in a blend of philosophy and spirituality, thus making the message more widely palatable. Recently, Modi tweeted the video of Sadhguru discussing the CAA and wrote,

“Do hear this lucid explanation of aspects relating to CAA and more by @SadhguruJV. He provides historical context, brilliantly highlights our culture of brotherhood. He also calls out the misinformation by vested interest groups.”

The timing of the video coming into the public domain, right when the protests were gathering momentum and the crackdown was starting, only shows the amazing synchronisation between the guru and the government. Furthermore, much of the audience which listens to his lectures is attracted not just by his calmly commanding personality but also by his ability to speak eloquently in English, which, unfortunately, many across the sub-continent still see as barometre of one’s intelligence. Furthermore, over the years, Sadhguru has been embroiled in a number of other controversies. He was accused of having killed his wife (but was never convicted and has always denied the allegation), and his foundation, the Isha Foundation, has been accused of being involved in land-grabbing practices.

Hence, Sadhguru is able to mix myth and history in order to adapt them according to the modern political demands. But Sadhguru is not an isolated case. Baba Ramdev and Sri Sri Ravi are two other gurus who also act as the government’s spiritual henchmen. Ultimately, it would seem that the media, important government institutions, the state machinery, and spiritual gurus are all working in tandem to create a majoritarian nation. The likes of Sadhguru and other new age gurus are not unifying figures but simply mercenaries of hate and propaganda. They are guided by their worldly interests and are happy to act as BJP spokespersons in order to protect their spiritual empires.