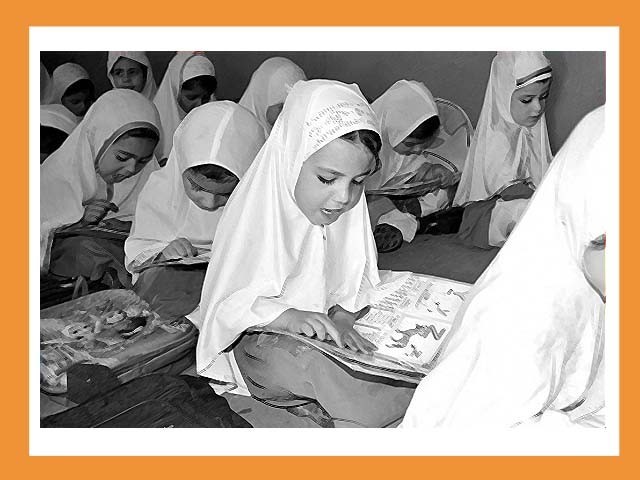 Pakistani students attend a class at a school in Quetta. PHOTO: GETTY

The failure of the Pakistan government to ensure access to quality education for the people of Balochistan has already been well documented. While it may well be tempting to harp on about the repeated shortcomings on part of the state to establish a reliable education system from which the residents of Balochistan can benefit, it is perhaps equally important to shed light upon those individuals who have made it their life’s mission to do what the state has failed to do for years – provide quality education to the children of Balochistan. One such initiative is the Balochistan Education System (BES) campaign, which started identifying non-functional government schools in the Awaran district last year in a bid to put them to use. The brainchild of Shabir Rakhshani, the campaign had its first success in the village of Abdul Sattar Goth, where the Government Boys Primary School, which had not been operational for a long time, was revamped and reopened. Since then, the campaign has evolved into a force which not only aims to promote the importance of literacy in Awaran but also wishes to ensure a communal engagement with education, literature and the arts across the region.

But the education predicament Awaran faces is only exacerbated by just how low the standard of living in the district is; and how oblivious the rest of the country is to the plight of those who reside in Awaran. For instance, in May 2018, hundreds of residents of Tranchik, a village situated in Awaran, suffered from severe gastroenteritis, which resulted in the deaths of at least six people. Because of the dilapidated healthcare system in Awaran, most of the patients had to be shifted to Hub for treatment. This case is only emblematic of the host of issues plaguing the region. Given the condition of the district, Rakhshani believes that the primary aim of the BES campaign is to highlight the plight of government schools in Awaran since the situation is representative of a wider education crisis being faced by the province as a whole. In light of this, Rakhshani hopes that the BES campaign can help capture the attention of the concerned departments and authorities and force them to take action.

The existence of ghost-schools and widespread corruption in the education department has led to the need for citizens like Rakhshani to launch their own private initiatives. While Balochistan Minister for Secondary and Higher Education Sardar Yar Mohammad Rind has stated that his “first priority is to identify ghost teachers, schools and employees in the education department” and has requested the National Accountability Bureau (NAB) to investigate corruption cases, it is evident that the province desperately needs a long-term education plan. Reportedly, Rs 43 billion have been allocated for education for this fiscal year, while there are already plans in place to build more than a 100 schools across various parts of the province. However, the state must realise that buliding new schools is pointless if the existing ones are not being used adequately. As has been made evident by the BES campaign, this is a matter of using existing resources in a constructive manner rather than just chucking money at the province in the hope that the issue will remedy itself. The BES campaign revealed a few months ago that 60 schools which were shut in Awaran had still been receiving state funding. According to Rakhshani,

“Even the condition of these schools is pathetic, despite the fact that the Secondary Education Department had released an amount of over Rs 30 million for ensuring availability of reading and writing material, mats, uniforms, scientific equipment and furniture.”

While the situation may appear grim, the BES campaign has been steadily working to help improve the situation in the region through a variety of initiatives. With the support of the local administration, Rakhshani and his team organised the first ever Awaran Education and Literature Festival last week. The event provided a platform for a discussion about a variety of topics, including the education crisis, the importance of educating women in order to ensure communal progress, and the significance of artistic contribution in any society. Hence, the widespread success of the festival helped shun many of the stereotypes associated with Balochistan in general and Awaran in particular. Firstly, the event was arranged by the citizens and well attended by the masses, proving that the people of the region are eager to support such initiatives. Secondly, while many living outside of Balochistan only have negative connotations associated with the region, the festival helped dispel certain security related myths, showing that a large scale event can be conducted in the region without any issues.

Hence, the BES initiative has not only brought the mismanagement in the education sector into the limelight but is also actively working towards uplifting the community as a whole. But the diligent work being done under such campaigns does not absolve the state of its responsibly to provide for the masses. While we must applaud the work being done by Rakhshani and his team, we must also hold the relevant authorities accountable for their repeated failures.

The author is a freelance journalist and researcher interested in history. He is currently pursuing an MPhil in Journalism from the University of Karachi. He tweets @Iconoclast_jurn (twitter.com/Iconoclast_jurn)