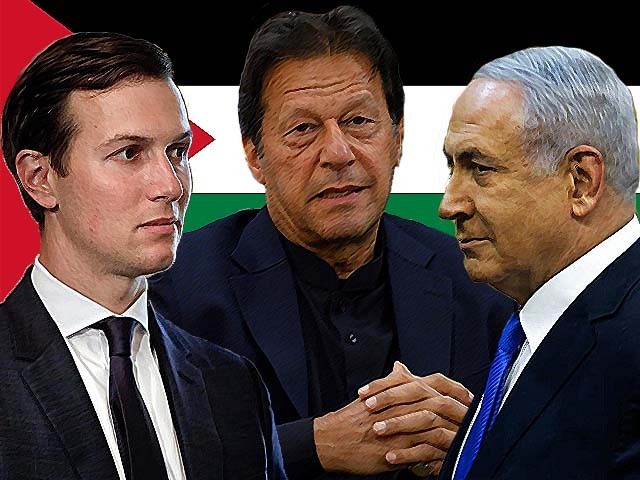 While difficult to predict how Pakistan would react, the scenario where it is deemed suitable by the makers of the notorious ‘Deal of the Century’ for Palestine to be approached for a stance supportive of the deal is not unlikely. The reason for the plausibility of this and for the speculation about Pakistan’s possible embracement of the deal not being entirely outlandish lies in contemporary Pakistani foreign policy itself.

The ‘Deal of the Century’: haphazard and contemptible

Reports suggest that the substantially already leaked ‘Deal of the Century’ prepared by partisan US-Israeli Zionists for Palestine will be announced within days. Israeli hegemony over Jerusalem is enshrined in the deal. Considering Israel’s long history of desecrating the Al Aqsa Masjid, anger over the legitimisation of this particular part of the occupation is widespread.

The architect of the plan is Donald Trump’s notorious son-in-law Jared Kushner, a member of a class of extremely wealthy and fanatical Zionist oligarchs in New York. Kushner, during Trump’s presidential election campaign in 2016, also acted as pointman for the fast-tracking of the Gulf Cooperation Council (GCC)-Israel ties, and seeks GCC funding and investment to make the deal possible and viable.

The deal, needless to say, was known to be lop-sided the moment it was announced, and the leaks by Israeli media only confirmed this.No Palestinian state – which illegal and racially exclusive Jewish-only Israeli settlements rendered physically impossible decades ago – will exist, but rather small fragments of Palestinian ‘autonomous’ entities surrounded by Israel will be created whose interaction with the outside world will be controlled by Israel. Egypt, whose Israeli-allied and supported dictator Abdel Fattah el-Sisi has full GCC backing, will host this ‘New Palestine’s’ airport and industrial zone, while Jordan will be connected with whatever part of the settlements-ridden West Bank ‘New Palestine’ constitutes.

How exactly this will be implemented is anyone’s guess at this point, especially given the severely non-conducive circumstances ranging from Israel’s inability to subdue Gazan armed groups and GCC fragility following the failed Yemen War.

Powers seeking to impose such policies under the deal, which seek to impose a status quo upon large populaces deeply offensive to their religious-ideological values, look for two major characteristics in partner states tasked with upholding that status quo.

The first is leadership without ideology and the second is the trademark client state behavior.

Since taking office in mid-2018, Khan has demonstrated a subservience to GCC dictations which is hard to deny. In addition to this, Khan’s government has also taken a clearly US-centric approach to its foreign policy, doggedly maintaining an essentially entirely fruitless strategy of jockeying the US for backing on the Kashmir issue. America has, of course, consistently sided with India and pressurised Pakistan via the Financial Action Task Force (FATF) as a boon to its Indian ally.

True to the US-Pakistan dynamic, recent imploring by Foreign Minister Shah Mahmood Qureshi for US assistance to get Pakistan cleared off the FATF’s grey list soon received an all-too-expected rebuke. Top US South Asia official Alice Wells, who was visiting Islamabad days after Qureshi’s US visit, supplemented standard US claims that the China Pakistan Economic Corridor (CPEC) – which it opposes as part of its ‘contain China’ strategy with Indian partnership – was a debt trap for Pakistan, with claims that ‘blacklisted’ firms had been given CPEC contracts.

In the obvious context of the FATF, the veiled threat to Pakistan and the cornerstone of its ties with China in CPEC was obvious.

Alongside pursuing policies not beneficial for the self yet tailored to foreign whims, another important aspect of the master-client relationships is when the client state willingly foregoes opportunities for finding alternate, equitable allies. The Khan government has visibly enshrined this approach as well with the fateful abandonment of the Kuala Lumpur Summit – a point-event for a large, powerful and visibly coalescing bloc of Muslim powers with demonstrable say in the Muslim world’s affairs – at the Saudi behest and in exchange for a $5 billion loan.

Relations with neighbouring Iran, an enemy of both the US and Saudi, have also been kept at an arm’s length and little to no attention was paid to Iran’s influential clergy’s stance on Kashmir following the August annexation by India which aligned closely with Pakistan’s. The GCC, as is well known, tacitly backed India on the matter while the Kuala Lumpur Summit’s organisers in Turkey and Malaysia earned much respect among Pakistanis for their principled stance on Kashmir – which earned them both backlash from India.

These states also, of course, oppose the deal.

On the ideology front, it is evident that Pakistan’s leadership possesses little of it. This is exemplified by its failure to keep Kashmir at the forefront of its foreign policy, its shunning of states which took principled stances on Kashmir based on flimsy excuses and false notions of its own constraints and lack of interest in manoeuvring out of its client state position.

The evident master-client relationship with the US and the GCC thus provides a suitable scenario for Pakistan to receive a US (or in practical terms, Israeli) backed, GCC-delivered invitation to support the ‘Deal of the Century’.

This, of course, does not mean that this is what will happen. Many factors, such as domestic blow back, point towards Pakistan practicing the same non-involvement in the entire ‘Deal of the Century’ situation it applies towards most affairs, whether wisely or not; but one cannot doubt that Pakistan has thus far shown itself to be a ‘worthy’ candidate for the likes of Kushner and his allies.

Should Pakistan support the ‘Deal of the Century’?