Is being a lawyer in Pakistan contingent upon one’s faith? 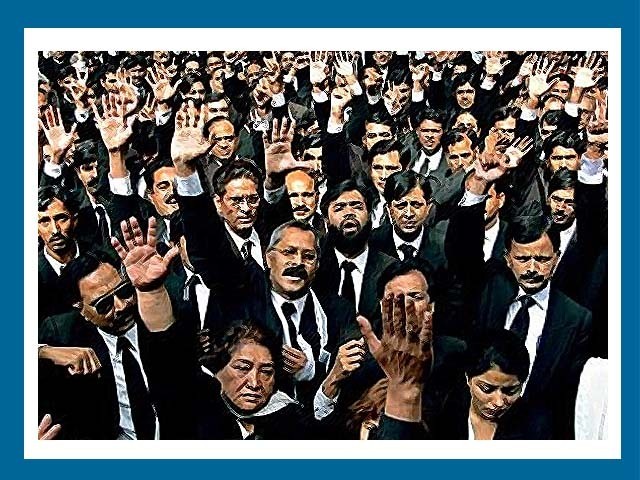 Pakistani lawyers at a rally in Lahore. PHOTO: GETTY

As Muslims, it is incumbent upon us to ensure that we treat non-Muslims residing in Pakistan fairly and with dignity and respect. It is therefore imperative that we safeguard the rights granted and guaranteed to them by both Islam and the Constitution of the Islamic Republic of Pakistan. Unfortunately, we have collectively continued to do the very opposite of this, thereby actively violating not only the injunctions of Islam, but also the vision of our founding father, Muhammad Ali Jinnah.

However, before divulging on the disservice we are doing to Jinnah’s legacy, we must reflect upon the important role our religious minorities have played in building Pakistan. It would be hard to name all of them since the list is too long, however, here are some names and their contributions for the country:

Iqbal Massih, who became a symbol of resistance against abusive child labour, he laid down his life for this cause when he was only 13 years old.

Retired justice Rana Bhagwandas, a Pakistani Hindu legal scholar who also served as the acting chief justice of Pakistan. He was a man of integrity and a patriot.

Retired group captain Cecil Chaudhary, a Pakistani Christian fighter pilot is a veteran of the Indo-Pak wars of 1965 and 1971. He received the Sitara-e-Jurat.

Jamsheed Kaikobad Ardeshir Marker, a Hilal-e-Imtiaz recipient who served as Pakistan’s top envoy to the US and more than a dozen other countries for a period of more than three decades which earned him the distinction of being the worlds longest serving ambassador.

Late wing commander Mervyn Leslie Middlecoat fought in the wars of 1965 and 1971 and was awarded Sitara-e-Jurrat and Sitara-e-Bisalat for combating Indian fighter jets. He died while fighting Israeli pilots in the 1967 war on behalf of Jordan.

Late squadron leader Peter Christy was dubbed the master fighter and undeniably was one of our nation’s heroes. He died while serving the country and was awarded the Tamgha-e-Jurrat and Sitara-e-Jurrat for his tireless contributions to the Pakistan Air Force.

However, in spite of their endless contributions, non-Muslim Pakistanis have gotten little respite from incessant discrimination and persecution. Our founding father was adamant that Pakistan should become a home for all religions, not just Muslims.
Mr Jinnah in his policy speech on the 11th of August, 1947, stated that:

“…in any case Pakistan is not going to be a theocratic state, to be ruled by priests with a divine mission. We have many non-Muslims, Hindus, Christians and Parsis, but they are all Pakistanis. They will enjoy the same rights and privileges as any other citizen and will play their rightful part in the affairs of Pakistan.”

This speech is testament to the fact that Jinnah envisioned a Pakistan where every citizen would be free to participate in the affairs of the State, regardless of their religious affiliations. However, this vision has been abandoned by the State, not necessarily due to wilful negligence, but because of the copious pressure exerted by the “priests with a divine mission” that Jinnah alluded to. This was exemplified by the removal of Atif Rehman Mian from the Prime Minister’s Economic Advisory Council on the basis of his religious beliefs.

These “priests with a divine mission” only succeed because of the support provided to them by the common man. The general populace has become increasingly intolerant, perhaps because of their narrow knowledge of Islam and an over-arching tunnel vision as to what Pakistan was created for.  Even Muslims, more often than not, find themselves having to prove their adherence to their declared faith. The loyalties of federal ministers, army generals and other important public figures have been regularly questioned, simply due to their religious leaning or stance, even if they are, for all intents and purposes, Muslims.

At times, this questioning takes such an extreme turn that the relevant individuals end up fearing for their lives. All it takes is for someone to accuse a person of committing blasphemy and immediately, a blood thirsty mob surrounds the individual’s house in an attempt to take his or her life. Consequently, most are unwilling to help such a person because alleged “abettors of blasphemers” are met with the same deadly fate.

The only way to stay safe in this country is to somehow ensure that you are recognised as a true Muslim. Regrettably, it appears that one of the ways to obtain such a certificate is through the persecution of minorities or by stripping them of their legal rights. A classic example of this is the resolution passed by the Multan Bar Association, which states that non-Muslims should not be allowed to contest elections for District Bar positions.

Although, this is merely a resolution and there have been far more deplorable attacks against minorities, the significance of this resolution cannot be ignored. The custodians of the law, who should be the advocates of the rights of minorities, have reached a new low by passing such a discriminatory resolution, knowing full well that it is in contradiction with Article 20 and Article 25 of the Constitution of the Islamic Republic of Pakistan.

Just as I thought that the situation could not get worst, the General Body of the Islamabad Bar Association, on 6th December, 2019 also put forth a requirement for all members to declare their faith. The existing Muslim members are now required to submit an affidavit by the 31st of January, declaring that they believe in the finality of Prophet Muhammad (PBUH), failure of which will lead to the suspension of their membership.

The Islamabad Bar Association has made it mandatory for its members to declare their faith. If they choose Islam, they will have to sign the declaration that they are not #Ahmadis. The persecution of #Ahmadiyya community continues in Pakistan… #AhmadiApartheid pic.twitter.com/tLBwBMWIG3

All that remains to be done is for the State to publish a list of non-Muslims and open up concentration camps where they can be detained till they relinquish their religious beliefs. An even better idea would be for the State to float a tender for the construction and management of these camps, inviting private parties to submit their respective bids; needless to say, Multan Bar Association and Islamabad Bar Association should be allowed to participate.

It is hoped that the State would understand the sarcasm and that the bar associations will realise that their decisions have far reaching consequences. Let us not abandon Jinnah’s vision for Pakistan. In these testing times we need to stay united, discriminating against non-Muslims would serve no purpose, if anything, it would only lead to polarising the society further. Our Constitution guarantees equality for all, and it is incumbent upon the State to ensure that the sentiments of all citizens are respected. As the famous Sufi saint, poet and scholar, Bulleh Shah, said

Par kisi da dil na dhain, Rab dilaan vich rehnda.
Tear down the mosque and the temple; break everything in sight.
But do not break a person?s heart, it is there that God resides.”

For all those certified Muslims, who think they have the mandate to hurt non-Muslims,  one can only hope that one day they will develop a much better understanding of Islam. For all non-Muslims residing in this country, please know that you are no less of a Pakistani than anyone else, know that the silent majority is sorry and most importantly, know that,

Public hangings: Two wrongs do not make a right