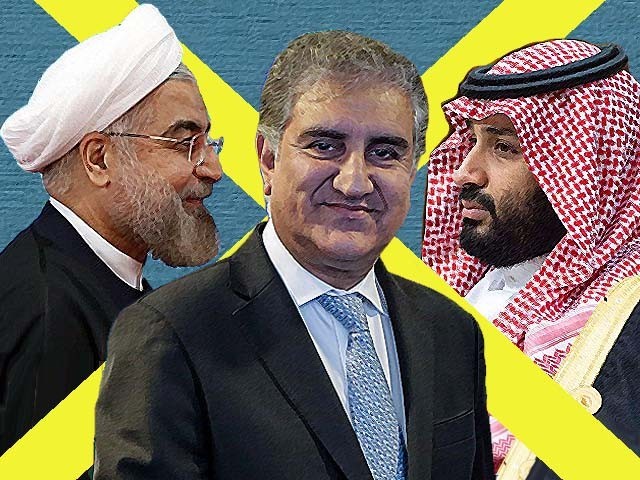 Pakistan’s Foreign Minister, Shah Mahmood Qureshi, recently visited both Iran and Saudi Arabia at a time when the region is on the precipice of imploding. The timing of the visits was no fortune coincidence. In fact, it showed Islamabad’s intent to maintain peace in the region, further exemplified by its attempts to mediate between Saudi Arabia and Iran in the past. Last year, Prime Minister Imran Khan visited the two countries in a bid to ease tensions after drone attacks targeted two Saudi oil facilities.

The fact that Pakistan is actively trying to preserve regional stability suggests that there are world powers involved who want to see immediate de-escalation and so, have tasked our government with this assignment. However, this begs the question; can Pakistan be a good mediator?

Students of International Relations will confirm that the foremost requirement for an effective mediator is to be neutral and reputable. I had the opportunity to talk with certain individuals close to Iranian and Iraqi governments, during which, they questioned Pakistan’s neutrality and were of the opinion that our foreign policy is subservient to the Saudi agenda. Our tilt towards Saudi Arabia is natural and understandable, after all, it was Saudi Arabia who agreed to provide a $six billion bailout package to Pakistan to keep its balance of payments positive. Nevertheless, history tells us that Saudi generosity always comes with a sizeable price tag which Pakistan, as a nation, is then forced to pay.

The recent cancellation of Imran’s trip to Malaysia is one of the examples where Riyadh’s interest was chosen over Islamabad’s. According to reports, Saudi Arabia pressurised the incumbent prime minister to withdraw from the conference that had ironically been initiated and planned by Pakistan to address challenges faced by the Muslim world. This move re-affirmed to both Iran and Turkey that Pakistan’s foreign policy heavily relies on Saudi approval.

Therefore, the question remains; why is Pakistan taking the lead in such a precarious peace process in spite of its partisan position?

For starters, the fact of the matter is, Pakistan is the only country in the region which is ostensibly on talking terms with both Iran and Saudi Arabia. It is no secret that the Saudis despise Malaysia, Qatar, Iran and Turkey for their role in challenging Riyadh’s monopoly over Islam. Similarly, Iran has had longstanding issues with the UAE and Egypt, primarily due to the Sunni-Shia divide. This leaves Pakistan in a complex, yet unique situation where it emerges as the prime candidate that can play a viable role in defusing the on-going tensions.

The biggest motivator that the world powers have to engage Pakistan in such a peace process is to prevent any spill-over that leads to war.  It is clear that such a war will not be restricted to Iranian borders. It will have widespread consequences across the region, particularly in Iraq, Yemen, Syria, and Lebanon. We must also not forget the refugee crisis which has already displaced and affected millions of people. If things escalate, the region will witness another catastrophic humanitarian crisis.

Iran-China relations also have significant relevance in the prevalent situation. China is Iran’s biggest buyer of crude oil and both states are committed to expanding their trade by $600 billion in the next 10 years. The Chinese have already cautioned that attacks by the US against Iran could be used to hurt China’s economy. As a result, any disturbance in the Persian Gulf will affect China’s reliance on Iranian oil and its trade with other West Asian states. Perhaps Pakistan feels obligated to protect Chinese interests .

It is also safe to say that stability in the region is congruent with Pakistan’s national interest. Trump’s threat to hit Iranian ‘cultural sites’ must have alarmed the local Shiite populace, seeing as how most of these sites are shrines which are sacred for them. Shiites have fought against Daesh in Syria and Iraq in order to protect several sacred tombs scattered across the expanse. Therefore, if any religious sites are threatened, there will be a popular mobilisation within the country, which may lead to further polarisation if Pakistan decides not to side with Iran.

More importantly perhaps, Balochistan, a historically neglected, deprived and exploited province, will bear the brunt of any escalation with Iran. Such a conflict is likely to increase the activity of anti-Shiite militant sleeper cells, such as Jundullah, Lashkar-i-Jhangvi and Daesh, who may target minorities such as the oft persecuted Shia Hazara community.

Lastly, turbulence in the Persian Gulf will also affect Pakistan’s geopolitical position because an armed conflict can potentially disrupt trade in the region. This would make Pakistan’s ports a considerable safety risk, which in turn would divert marine traffic towards other countries such as India, essentially crippling Pakistan’s already volatile economy.

In order to avoid the aforementioned catastrophe, Pakistan will somehow have to maintain its neutrality which in itself is quite a challenge. Thus, to become an effective mediator, Pakistan will have to promulgate an independent foreign policy so that it is not viewed as a spokesperson of any other country.