Will Pakistan ever rid itself of the polio menace? 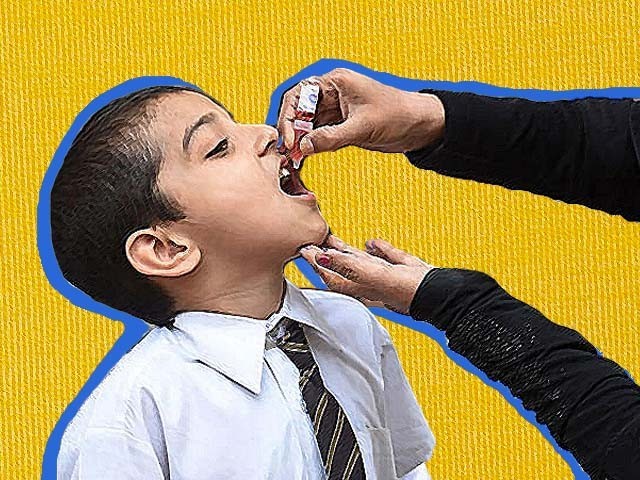 Recent reports indicate that six new cases of polio have been registered in Pakistan, thus meaning that currently 148 children are afflicted with the disease. Polio is a highly infectious viral disease which attacks the nervous system, mainly of children and can cause irreversible paralysis in a matter of hours, depending on the potency of the virus. The disease is primarily transmitted orally through the mouth, either due to a polluted water supply or contaminated food. The virus finds a conducive environment in the intestine and begins to multiply rapidly. It is then partially excreted out of the body in the form of faeces. This can prove to be very dangerous if the surrounding sanitation system is not up to the mark because the virus can eventually find its way into the water supply which in turn continues the cyclical spread of the disease. The only way to combat the spread of the virus effectively is through vaccination. Therefore, a successful immunisation drive will remove or at least reduce the number of targets susceptible to the virus which should eventually eliminate it completely.

Almost 95% of patients infected by polio do not experience any initial onset symptoms which makes the disease very hard to detect in the earlier stages. When the patient does exhibit symptoms, it is usually in the form of fever, fatigue, headache, vomiting, and stiffness in the neck and pain in the limbs. Such signs can be easily mistaken as symptoms of the common cold or other rudimentary afflictions, making polio even harder to diagnose in a timely manner. Once polio cases are detected, treatment can only be given to patients to alleviate the symptoms, not cure them. Heat and physical therapy is used to stimulate the muscles and antispasmodic drugs are given to relax the muscles. While this can improve mobility, it cannot reverse permanent polio paralysis.

The Government of Pakistan, with the support of the World Health Organisation (WHO), United Nation’s Children Fund (UNICEF) and other key partners of the Global Polio Eradication Initiative (GPEI), has made long strides towards the global goal of eradicating polio in the recent years. A robust vaccination campaign, strong monitoring and the unflinching resolve of the health workers tasked with this gargantuan task should ideally have rid us of this menace by now.

Unfortunately, Pakistan remains one of three countries in the world along with Afghanistan and Nigeria with active polio transmission and only one of two countries with wild polio transmission. The official number of reported polio cases in 2017 and in 2018 were eight and 12 respectively. As a result, the prospects of eradicating polio in the country in the coming years were promising. However, in 2019, a total of 134 cases were reported from all across the country signifying that this problem was far from over.

Pakistan is currently grappling with an increased number of cases of wild polio virus WPV Type 1 as well as a cVDPV2 outbreak as confirmed by WHO in 2019. WPV type 1 polio virus is a naturally occurring strain found in the environment while the second variant of the disease is vaccine-derived polio type 2 (cVDPV2). It is caused by a mutated form of the excreted virus contained within the oral polio vaccine (OPV). An OPV contains a weakened vaccine virus which allows antibodies to prepare for a stronger strain of the virus if push comes to shove. When a child is immunised, the weakened virus replicates in the intestine for a limited time. Then, it is excreted in faeces and eventually dies out. On rare occasions, if the population is not adequately immunised, the virus starts circulating amongst members of the community for an extended time when it gradually undergoes genetic changes. This mutated form of virus can cause paralysis. CVDPV2 is not related to, nor indicative of a re-emergence of wild polio virus, but still poses a significant challenge as Pakistan looks to eradicate polio.

The recent surge in cases of WPV Type 1 polio in 2019 can be attributed to misinformation and a sham video that was circulating on social media, claiming that polio drops had poisoned children which had resulted in their death. While this video eventually proved to be false, the damage had already been done. Certain parents went as far as marking the fingers of their children in an attempt to hoodwink polio workers and prevent their children from receiving the drops.

The WHO, based on an analysis of multiple environmental samples taken from the country, has painted a gloomy picture for 2020. Polio will most likely remain a problem for Pakistan during the year, because of which the WHO has extended travel restrictions in Pakistan for three more months. As mentioned previously, the solution lies only in prevention through an oral polio vaccine. The vaccine eliminates the risk of developing polio in the general population and also, helps prevent cases of cVDPV2 caused by lingering mutant strains of polio virus in the environment.

Improved sanitation and living conditions can eliminate the risk of cVDPV2 as well while frequent environmental sampling to detect this variant of the disease can help in early estimates of transmission and potential outbreaks. Moreover, strengthening polio surveillance systems and ensuring high vaccination coverage can help tackle both problems of emergence of WPV type 1 and control of cVDPV2.

Finally, mass awareness campaigns which engage with the religious factions of society will certainly help dispel misinformation and can go a long way in changing the attitudes of communities towards vaccination. Admittedly, Pakistan faces an uphill battle in the fight against the polio, but the task at hand is by no means insurmountable.

The writer is a doctor based in Islamabad, currently pursuing a career in public health. His interests revolve around statistical analyses in understanding health related issues and developing strategies to curb these problems.