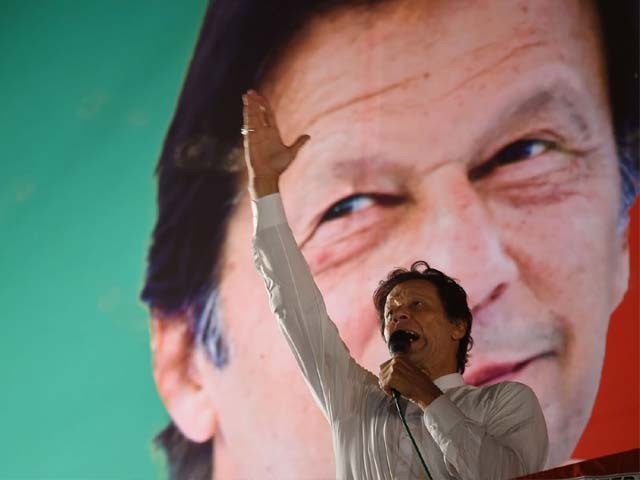 Imran Khan gestures as he delivers a speech during a political campaign rally. PHOTO: GETTY

Every political party uses slogans to expand its membership and to energise its existing base. Some slogans articulate a party’s vision, some summarise its central narrative, while others highlight the steps the party will take once in power. Slogans are a powerful political marketing tool and can be extremely effective if they are catchy and easy to understand. For example, Donald Trump’s campaign slogan “Make America Great Again” was extremely successful because it was catchy and effectively articulated Trump’s narrative that America had lost its ‘past glory’ and that he was the right person to restore it. In Pakistan, the Pakistan Peoples Party’s (PPP) slogan in the 1970’s “Maang raha hai har insaan, roti kapra aur makaan” (Every person is demanding food, clothing and shelter) articulated the party’s vision of a relatively egalitarian Pakistan and a desire to combat poverty. Likewise, the Pakistan Muslim League-Nawaz’s (PML-N) slogan “Vote ko izzat do” (Respect the vote) articulated the party narrative that it stood for civilian supremacy.

While slogans can be successful in galvanising supporters during the election season, they can also create high expectations, particularly if the party championing such claims wins the elections. As a result, often the party’s performance is judged in the light of its previous claims and slogans. This is precisely why more seasoned and mature political parties shy away from setting unrealistic expectations right from the outset. Once in power, most party’s realise that governance is a difficult job due to the complex nature of the problems at hand and the scarcity of resources available. The difficulties are further compounded if the party had promised a complete change or a ‘revolution’ before coming into power. This is because it is extremely easy for voters to compare past and present and judge the extent of change the party has brought. In case the party fails (which most of such ‘revolutionary’ parties do) then addressing disappointment amongst its supporters becomes an extremely important albeit herculean task.

Pakistan Tehreek Insaaf (PTI) can be categorised as a party which promised revolutionary change and has now become burdened by the extremely high expectations it raised. The PTI slogan “Naya Pakistan” summarises its central narrative that Pakistan as a nation needs to reinvent itself and that the so called ‘status quo’ must be changed in order for the nation to escape a myriad of problems. PTI claimed that it would challenge the status quo, from the way elections are fought to the way the country is governed. With respect to the elections, Imran initially claimed that the party would never compromise on its principles and would therefore not allot tickets to so called ‘electables.’  Imran, before 2011, frequently criticised the powerful establishment for “manipulating” elections to bring into power “puppets” of their choice.

Despite the promises of ‘revolutionary’ changes in election tactics, PTI ended up shamelessly espousing the same tactics it had criticised in the past. It courted the establishment,  awarded tickets to powerful electables and ignored its loyal ideological workers. Worst of all, PTI chose to placate certain religious quarters (a dangerous and regressive tactic), once again showing that there was nothing ‘revolutionary’ about the tactics adopted by the party.

With respect to governance, PTI promised that after obtaining power the party would strive to drastically change the status quo by: undertaking police reforms and stopping political interference in the process; improving social justice; enhancing freedom of expression; breaking the “begging” bowl by improving tax collection and reducing the fiscal deficit; improving human development by increasing the development budget and reducing corruption through across the board accountability. Furthermore, the party also promised a very short time horizon for making these revolutionary changes and completely overhauling the system.

But, as we enter 2020, it has become increasingly clear that PTI has failed to even partially fulfill any of these tall promises. As I write these sentences, so called police reforms have still not been implemented and the party has constantly been changing inspector generals (IGs), often for paltry reasons. Human development indicators have worsened and the developmental budget has been slashed, while both the media and civil society have witnessed a near unprecedented attack on their freedom. Despite tall claims in the past, PTI chose to give the COAS an extension, albeit in a botched manner. Instead of Pakistan becoming self-reliant, our fiscal deficit is the highest it has ever been in the last three decades, and we have become international beggars severely compromising our foreign policy independence. Yes, due to the International Monetary Fund (IMF) programme, our current account deficit has improved, but the cost has been tremendous as the growth has slowed down and utility prices have increased, disproportionately burdening the common man.

Such promises were too unrealistic and the party simply never had the required competence or intent to even partially fulfill them. While PTI showed immaturity in raising such slogans, and hence expectations, its strategy in managing the fallout from its massive governance failures is also perplexing. The party, instead of honestly admitting its initial misjudgments and rectifying its failures in governance, has instead adopted a policy of giving strange spins to its failures and U-turns by interpreting them as a fight against the “status quo”. Our foreign aid dependence, which has increased under PTI, has been interpreted as a ‘revolution’ in foreign policy. Attack on media freedom is justified as a war against a ‘mafia’ in the newspapers which, in PTI’s imagination, also represent the status quo. Complete subservience to traditional powerful quarters is interpreted as being ‘on the same page’, and somehow against the status quo.

The worst aspect is perhaps the selective accountability targeting the opposition and locking up of opposition leaders on extremely weak evidence. According to PTI’s narrative, Imran is doing this because he is angry and cannot shake hands with the corrupt forces of the so-called status quo. Nothing could be further from the truth than this logic. The real reason is that PTI is targeting the opposition in an attempt to cover up its own failures and to prevent the opposition from successfully launching public protests. In politics, you win by either increasing your own popularity or by weakening the opposition through a crackdown. The former method is employed by genuinely democratic parties who are performing well when in power, while the latter is employed by those who have no genuine mandate and are performing dismally.

Unfortunately, it seems that PTI belongs to the latter category. Raising slogans that opposition leaders should be hanged is a vile display of personal vendettas and does not represent the fight against the status quo. If anything, working with the opposition to solve the problems Pakistan is currently facing will prove to be a genuine step towards ‘Naya Pakistan.’ Hence, PTI is a classic example of how a party becomes a victim of its own rhetoric. It should have never raised such unrealistic slogans and made such lofty promises. Regrettably, this behaviour is showing no sign of improvement as the party continues to justify its missteps.