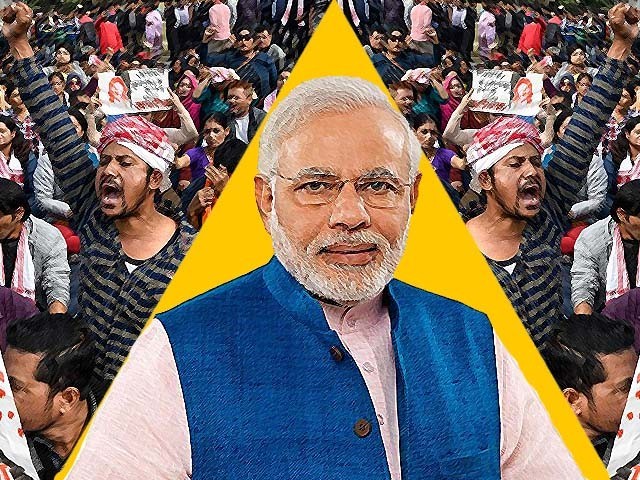 There were many question marks surrounding Narendra Modi when he was making a bid to become prime minister of India back in 2014. Would he be able to devote his attention towards the development of the country? Would his slogan ‘sabka saath sabka vikas’ (together with all and development for all) translate into a reality? At the time, many went against their instincts and voted for him, confident that his past would not hinder the construction of a new beginning in Delhi. But few could have foreseen the dark turn the Modi regime would take in the years to come. Sometimes our worst fears really become a reality, and India today is living in that very fear. Modi could not become a unifying figure that many had hoped for, and has instead emerged as a widely divisive figure.

The turmoil that we in India have been witnessing for more than two weeks now is the byproduct of a conflict between Modi’s imagined India and the idea of India as envisioned by the nation’s progenitors. A large swathe of the nation feels that the Citizenship Amendment Act (CAA) is not about giving citizenship to non-Muslims of the three neighboring countries of Bangladesh, Pakistan and Afghanistan. Instead, it is about moulding the intrinsic character of the nation and making India a majoritarian state. But Modi has not witnessed this kind of open resistance in his six year tenure. People from all sections of society are joining hands to protest against the change which the current government is so adamant to usher in.

The state reaction to these protests is also a cause for concern. According to media reports, 22 people have been killed in Uttar Pradesh so far due to clashes with the police, while hundreds of people have been taken into police custody. Students have been picked up from their university campuses, houses of Muslim families have been vandalised, and there are reports of state forces using communally charged language against Muslim protesters. But instead of addressing the issue, the government is intent on downplaying the seriousness of this matter, instead choosing to levy blame upon the protesters and bully them into silence.

But this time around the people of India are actively resisting the divisive agenda of the ruling party since there is now a wider realisation and disenchantment with the government. Even though a large section of the media is reporting about the protests in a partisan manner, people are beginning to understand that this government is intent upon widening the societal and religious fault lines in the country; and all its promises of economic development were simply a ruse. But the CAA is not a stand-alone legislation and represents the discourse which has come to dominate the BJP agenda.

The Modi regime has plans to bring in an all India National Register of Citizens (NRC), an exercise aimed at weeding out illegal Indian citizens. If anyone other than a Muslim is left out of the NRC, they will have the protection of the CAA, but Muslims will be declared stateless. Though the Indian government announced last week that it does not plan to bring about a state-wide implementation of the NRC, people are unwilling to trust the government because BJP members have previously announced that the CAA would be followed by the NRC. Hence, democratic India is witnessing a new kind of authoritarian curb on its freedom of expression and right to protest. Nowhere in recent memory has such a kind of blanket ban been imposed against those who wish to peacefully express their dissatisfaction with the government’s legislation.

Today, India’s international image is no longer what it was back in 2014. We no longer command the kind of respect we used to have just a few years ago. The uprising that India is seeing today is an attempt to reclaim that moral authority which India used to carry as a democratic and secular republic. Generally, the first year of any new government is supposed to be its honeymoon period, but Modi has lost the affection of the people within eight months of his re-election. The next four and half years, before the 2024 elections are held, may just prove to be the longest in the country’s history and could cause some irreparable damage. But, at the end of the day, when all is said and done, the BJP has to understand that no government can win a war against its own people.