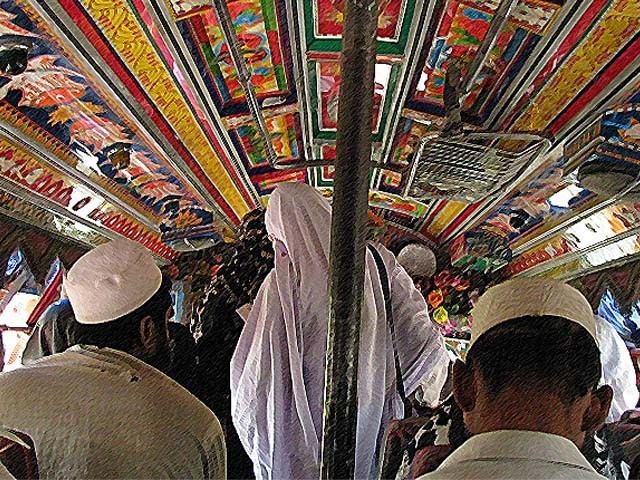 A woman travels in a bus in Pakistan. PHOTO: GETTY

While the gender disparity which plagues Pakistan is by no means undocumented, perhaps the true extent of this gulf escapes us on a daily basis. The disparity becomes particularly stark when it is placed in a global context, as illustrated in the recently released report by the World Economic Forum titled the ‘Global Gender Gap Index 2018.’ According to the report, Pakistan is the second-worst country in the world when it comes to gender disparity, a title which should make it apparent that drastic reforms are needed in the country if we truly wish to become a nation which provides equal access to opportunities irrespective of gender. As the report outlines, only women in Yemen have it worse off than the women in Pakistan, thus meaning that Pakistan is at the bottom of the list if seen from a regional, South Asian perspective. Naturally, the question becomes what needs to change in order for us to ensure that women in the nation are no longer discriminated against due to their gender?

The manner in which this problem is tackled will have to be multi-faceted and must address a whole host of issues, ranging from economic independence, access to education, tackling harassment, and so forth. How Pakistan must go about grappling with each one of these particular challenges is a discussion which requires far more space to write about than that which I am afforded here, thus this piece will focus primarily upon only one aspect which must be worked upon to help curb the gender gap – mobility. What makes this particularly important is the fact that many other forms of emancipation and independence are linked to how easily an individual can traverse a particular space. The ability to freely travel to universities, banks, hospitals, public spaces, and jobs will contribute towards the economic independence, physical health, mental well-being, and ones ability to be an active Pakistani citizen. However, as a result of the gender gap outlined in the World Economic Forum report, many women in the country have been forced to become reliant upon the men in their family for simple daily chores. Furthermore, as lawyer Sara Ali argues, “Pakistani cities are designed for men who own and drive cars,” and thus fail to take into account various other needs of the citizens.

However, the failure here is not only an institutional one. While we must call out our city planners and politicians for their inability to ensure a more equitable transport network, it is also important to keep in mind that this gender disparity has not emerged in a vacuum, nor is it a factor which has been externally imposed upon us. Instead, it is a problem of our own making. Take for instance the survey carried out by the Centre for Economic Research in Pakistan (CERP), under which interviews were conducted in “1,000 households across Lahore, (in which) 70% of the male respondents said they would discourage female family members from taking public wagon services.” The regular harassment which women have to face in Pakistan on a daily basis is an open secret, and evidently this is having an adverse impact on women’s ease of access to transport facilities in the country. As mentioned earlier, many of the issues women have to face are interlocked with each other, and wrestling with one means having to wrestle with several other problems too. While in the short run there may be no immediate fix to this, it is imperative that our policymakers start acknowledging these fault-lines so that we as a nation can actively begin working to rectify them.

However, it is important to keep in mind that many women across the country travel across cities and neighbourhoods on a daily basis despite the lack of a safe transport network. While the CERP survey mentions that harassment may discourage some families from allowing women to use certain modes of transport, the truth of the matter is that many women in the country simply do not have that luxury. Many women in Pakistan have no choice but to work due to the the dire financial straits their families are in, and many other women choose to work simply because it is their inalienable right to do so. Hence, regardless of access to transport facilities or harassment along the commute, they simply have no other daily alternative and therefore have to silently bear this burden day after day.

The state of public buses in Pakistan in general, and Karachi in particular, is perhaps another topic unto itself. Public buses follow no schedule, they are in a poor condition, and often passengers have to enter and exit the bus while it is still moving, not to mention the lecherous music often being played by the bus drivers. The presence of a women’s only compartment in buses not only fails to address the root cause of the problem but it also does little to deter men from encroaching into the space consigned for women and harassing them therein. Additionally, women often wait for their buses at bus stops or at road corners and often have to face harassment at these locations too.

Given the wide array of problems women have to face while simply trying to traverse public spaces, and the general government apathy regarding state measures to address these issues, one might be inclined to feel increasingly dismayed. However, recent ventures spearheaded by conscientiousness citizens aimed at increasing female mobility in Pakistan do provide a ray of hope. One such initiative is Salman Sufi’s ‘Women on Wheels’ campaign, through which “10,000 women will be taught motorcycle driving as part of the campaign and they will also be provided assistance to get driving licences.” Perhaps even more than the initiative, it is the response to it which inspires great confidence and pride and it was heartening to see a great number of women in Karachi register for this campaign. While this is a promising start, one hopes that this campaign will also move beyond metropolitan cities and will provide women in both urban and rural areas with the ability to increase their own mobility; since many women in several rural areas have to walk for miles to work in the fields or to fetch water for their families. For that I wish Mr Sufi and his team the best of luck.

According to an International Monetary Fund (IMF) report published last year, Pakistan’s gross domestic product (GDP) can rise by 30% if the gender gap is closed. This is a vital statistic and can no longer afford to be ignored. Hence, ultimately, increased female mobility will benefit the women, their families, and the nation as a whole.