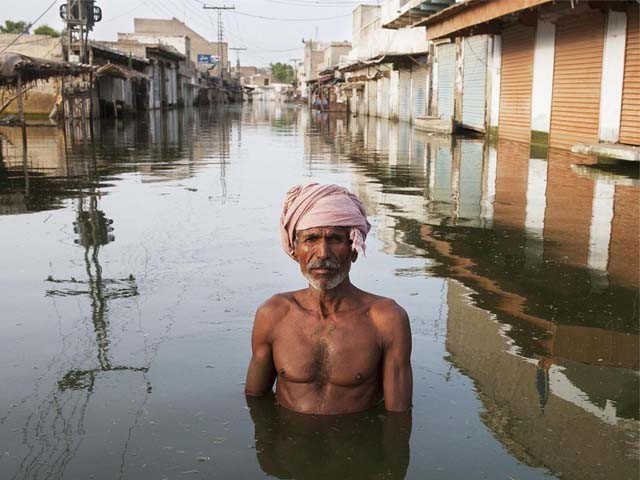 Ahmed stands in the centre of the town of Khairpur Nathan Shah which had been totally submerged by floodwaters. PHOTO: GETTY

As Pakistan continues to grapple with the climate crisis, it is increasingly important that we as a nation turn our sights towards the future. As environmental lawyer Sara Hayat informed me,

“Planting trees has huge benefits for the soil, air pollution, livelihoods of people. However, the tree tsunami must be supplemented by policy measures that curb global greenhouse gas (GHG) emissions at the source. Carbon sinks are useless if no mitigation measures are being prioritised. Furthermore, Pakistan has the highest deforestation rate in the world per a Lahore High Court judgment. Don’t plant trees if you’re going to keep cutting them down.”

The way forward for Pakistan is to find holistic solutions to climate change and it is imperative that this becomes one of Pakistan’s top priorities. Coming up with a national action plan to tackle air pollution that will impose a nationwide cap on coal use is desperately needed given the increasing reliance on coal power plants, as mentioned in an earlier piece. However, whenever the debate about cutting the use of fossil fuels is initiated, the first argument that is put forth is: how do we meet the country’s energy crisis without utilising our coal resources?

This in turn begs another question: should we be solving one crisis by creating another one? Hayat is of the opinion that Pakistan can indeed do away with coal altogether without having to sacrifice any of it development goals. She said,

“Pakistan has a growing need for energy but instead of focusing on any one particular type of energy, we need to reach an equilibrium between identifying the cheapest and safest energy sources, environmental sustainability and ensuring economic development. This is the only practical way to proceed.”

This very point was illustrated at the recently held United Nations Climate Change Conference 2019 (COP25) which provided a platform for countries across the globe to come together and engage in dialogue regarding the failure to effectively tackle the climate crisis. However, unfortunately, no agreement regarding Article 6 of the Paris Agreement, which is supposed to set up international carbon markets, was reached. This failure of the conference is perhaps emblematic of the wider belief that the economic growth serves as the opportunity cost of addressing the growing climate crisis. For instance, countries like the United States, one of the biggest contributors to GHG emissions, effectively shut the door on all attempts of coming up with a strategic global financial target that could benefit less economically developed (LEDs) countries like Pakistan in initiating projects and initiatives to fight climate change.

In light of this, Kashmala Kakakhel, a climate finance expert who was part of Pakistan’s official delegation to COP25, stated,

While China is now investing more and more in wind and solar power at home, it has instead started investing in coal projects in other countries, including Pakistan. It is time that Pakistan addresses the coal issue and we as citizens must hold the government accountable for a failure to address these concerns. The Sahiwal coal power plant poses a serious threat to public health and the environment in the vicinity, as does the mining work being carried out by the Sino Sindh Resources Limited (SSRL) at Thar Coal Block One in Islamkot. As Hayat repeatedly cautions,

“If Pakistan has made a commitment to reduce its GHG emissions by 20% by 2030, then it must look at the energy and transport sector. Our projected GHG inventory shows we will be releasing 898 MT CO2 equivalent by 2030 just from the energy sector. The government needs to understand air pollution and smog are stemming from local sources, such as vehicular emissions and industrial emissions and should seek to propagate a factual narrative by focusing on addressing fuel quality standards and enforcing environmental standards for industrial emissions.”

National policies investing in renewable energy resources, focusing on an effective  public transport system and electric vehicle policies should be the need of the hour. Pakistan can not reduce its GHG emissions without shifting away from coal and moving towards renewable forms of energy.  According to a report by the Energy Policy Institute, University of Chicago, the citizens of Pakistan are losing, on average, two plus years of their life due to long term exposure to air pollution. If that in and of itself does not lead to the ringing of alarm bells for the Pakistani government then perhaps nothing will.