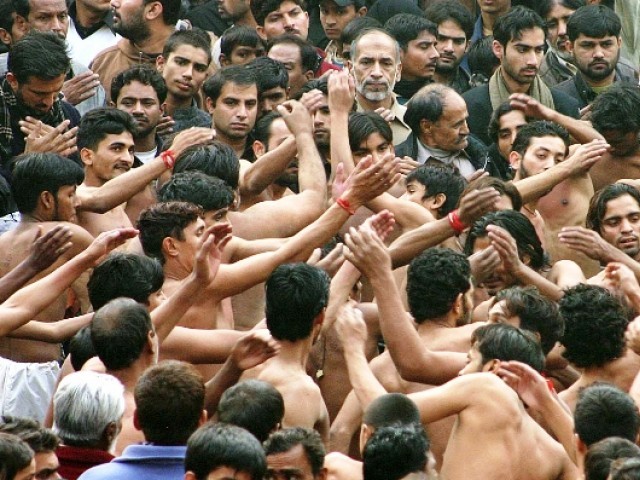 Mourning the suffering of Hussain and 72 other companions should be common to all Muslims, not just Shias. PHOTO: APP / FILE

I was tempted to write this article when I read another one on The Express Tribune titled ‘Muharram is your holiday, not mine’. In this blog, the writer complains about how she feels discriminated against and threatened by the Sunni sect, especially during Muharram and the day of Ashura.

While my intention is not to preach my version of Islam or contradict any sect’s belief, I feel that both Shias and Sunnis fight over the wrong reasons, with each sect going to the extremes to defend its own beliefs and judge the others’ doings.

For me, following the Quran and Prophet Muhammad’s (pbuh) Sunnah is enough. I will do what my beloved prophet instructed us Muslims to do. There is no denying the fact that Muharram, in Islamic history, has always been a holy month. Its sacredness comes from its derivation from the word ‘haraam’ (forbidden), as the practice of avoiding wars and fights during this month was widespread amongst the Arabs, long before Islam was born.

As far as the day of Ashura goes, popular hadiths have quoted that this day was significant in history primarily for being the day when the Prophet Moses  and his companions were forever rid of the Pharaoh’s vice, when he was drowned in the waters of Red Sea. The Jews always fasted on this day, but our beloved prophet instructed Muslims to observe a two-day fast to include either the day before or the day after Ashura in order to mark our difference with the Jews. Later in history, a second event marked this day’s importance because our beloved prophet’s grandson, Husain was martyred in Karbala.

Our prophet told us to fast and pray during Muharram; that’s reason enough for me. However, since it is not obligatory, if I don’t, it does not make me a lesser Muslim than anyone else.  Prophet Muhammad (pbuh) forbade me to mourn a death for more than three days, but he didn’t stop me from remembering and praying for someone I love. Moreover, he did not ban weddings in Muharram but if I choose to refrain from doing so out of respect and grief for a lost one, it doesn’t make me an infidel. If I do in fact, indulge in merrymaking that too is my personal choice.

I may have my opinions but I’m not an aalim (scholar) when it comes to matters of religion. Thus, in my ‘opinion’, if something is not highlighted in the Quran and Sunnah, it does not have to be a matter of life and death for anyone. I am answerable for my own deeds. If I go about celebrating my wedding in Muharram, if I say no to wedding invitations because of my beliefs, if I visit lectures on Ashura where Husain is remembered and prayed for, if I fast as my prophet asked me to –  I am answerable for my own deeds to Allah and He will decide if I am a better Muslim than the rest.

The problem with our society is every sect is so staunch in their beliefs that they forget their commonalities in the fire of hatred and intolerance.

The bottom line is that Muharram and the day of Ashura should be important for all Muslims, whether they are Shia or Sunni.

A MCS graduate from Szabist who has a project management and quality assurance background.