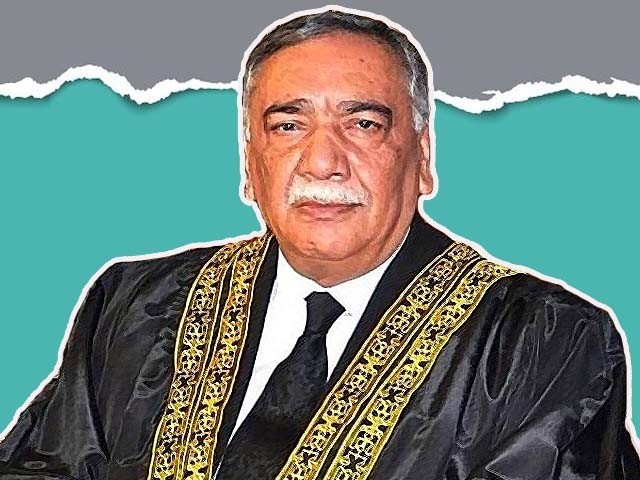 Justice Asif Saeed Khosa took oath as the 26th Chief Justice of Pakistan (CJP) after former CJP Mian Saqib Nisar’s retirement. Khosa, who was born in Dera Ghazi Khan in 1954, obtained his LLM from Queens College at Cambridge in 1978. After a lengthy legal practice, he was appointed as a judge of the Lahore High Court in May 21, 1998. When Musharraf imposed an emergency in 2007, Khosa was among the judges who refused to take oath under the Provisional Constitutional Order (PCO). By the time he was elevated to the Supreme Court as a judge in February 2010, he had already gained a formidable reputation owing to the unprecedented Mumtaz Qadri conviction and the Asia Bibi acquittal.

As a Supreme Court judge, Khosa was also a part of two different benches that were directly or indirectly responsible for ousting two sitting prime ministers, including Nawaz Sharif in the Panama Case in 2017 and Yousuf Raza Gillani in the memogate case.

Before Khosa took the helm of the apex court, the judiciary was going through a phase of incessant judicial activism where article 184(3) of the constitution was being invoked regularly, often resulting in chaotic situations and strenuous relations between state institutions.

However, in stark contrast to his predecessor, Justice Khosa curtailed judicial activism substantially and refrained from intervening in political cases. He also stayed away from the practice of taking suo motu notices on petty issues and followed in the footsteps of former chief justice Nasirul Mulk who believed that if a judge took a suo motu notice, it meant that he or she had already decided to move in a certain direction and therefore, could not act impartially.

Justice Khosa opined that suo motu notices were, for the most part, counter productive as officials were required to appear in front of the Supreme Court and waste valuable time which could have been utilised to attend to the matter at hand and fix the erroneous situation instead. Furthermore, Khosa also firmly believed that the Supreme judiciary should remember that they are not sitting on the benches of the court of first instance and that the apex court could not afford to become an institution of first resort.

He also showed disinterest in intervening in the executive’s actions and instead, chose to address the long list of pending cases that were piling up due to slow litigation. It wasn’t until a few weeks before his retirement that he he decided to take up the issue of the army chief’s extension and termed the move unconstitutional. He subsequently directed the parliament to legislate regarding the matter. He also lent crucial support to the special court so that it would not succumb to invisible pressure while it was hearing the treason case against former military dictator retired general Pervez Musharraf. The special court eventually awarded the death penalty to Musharraf for abrogating the constitution. These two cases show that Khosa remained steadfast in the face of the powers that be.

Khosa’s penchant for literature is evident from his detailed verdicts. He wrote a note in the Panama Papers judgement where he quoted the following excerpt from the Mario Puzo’s famous novel The Godfather.

“Behind every great fortune, there is a crime.”

Needless to add, his reference to the novel became quite popular and controversial at the same time. As a result, his judgments have been somewhat divisive and therefore, both eminent political parties, namely the Pakistan Tehreek-e-Insaaf (PTI) and Pakistan Muslim League Nawaz (PML-N) have criticised him at one point or another.

Understandably, people’s opinion of Khosa’s legacy will depend on their political and institutional affiliation. However, it is undeniable that Khosa restored the dignity and honour of the Supreme Court, something which his predecessor had eroded. Now it is up to the new chief justice, Justice Gulzar Ahmed to forge his own legacy and build upon the foundation that Khosa laid. Granted, following a class act such as Khosa is not easy, therefore, the new head of the apex court has his work cut out for him.

Finally, the farewell Khosa received in the form of the full-court reference was not only one of the warmest farewells of recent times, but it also showed the respect his peers and subordinates have for him. Perhaps for some, Khosa’s legacy will be one of controversy while for others, it will exemplify bravery. However, his tenure as CJP was, at the very least, one of the judiciary’s better periods, if not the best.