For the disabled, inclusive education is a must 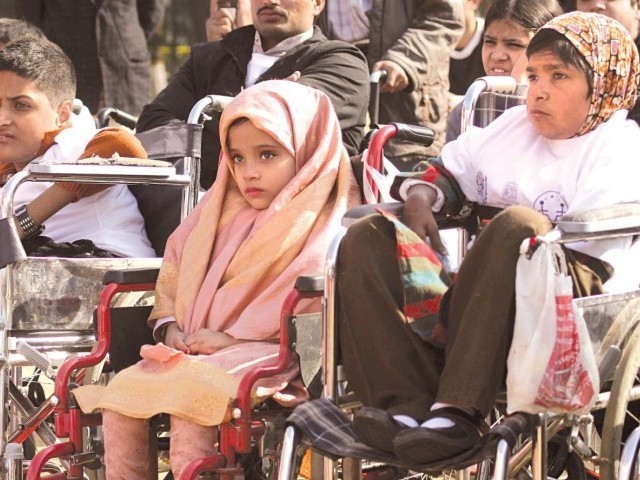 The physically challenged people also strongly feel that their fundamental right of education is being denied due to the present exclusionary system. PHOTOS: MUHAMMAD JAVAID

Like many other days, the International Day of Persons with Disabilities was also observed on Saturday with government and non-governmental organisations (NGOs) working for physically challenged persons holding walks and seminars. This year the emphasis was on inclusive education systems and a discrimination-free, level playing field for such persons.

Speakers at these functions demanded that the authorities should provide inclusive facilities in educational institutes to the disabled persons. Although the government has allocated special quota for disabled persons in jobs, it is not yet being implemented in a transparent way.

The educational institutes, especially higher education institutes, lack special facilities for physically challenged persons, who are facing problems due to great distances between them and their homes. The arrangements for inclusive facilities would allow disabled people nationwide to avail their fundamental right to education.

Their demands seem to be genuine and logical, as the government and some NGOs have established a few educational centres for special persons in the urban areas of the country, but the fact remains that a majority of disabled persons live in the rural areas, where proper facilities are unheard of and regular access to these urban centres is logistically near to impossible.

In developed countries, disabled persons are treated as linguistic minorities, rather than special people. There, the belief is that there is a need to mend societies instead of special persons.

Pakistan also needs changes, and providing some facilities in regular educational institutions to easily accommodate the disabled is a major need. Such an initiative would not only provide them with equal opportunities, but also boost their morale and make them useful citizens of the society. They strongly feel that they should not be left at the mercy of those who declare them disabled, but that they should be allowed to take classes with normal people with minor structural changes in the institutions.

The syllabus is also substandard as compared to the one meant for normal students which creates another hindrance in their ability to compete.

The physically challenged people also strongly feel that their fundamental right of education is being denied due to the present exclusionary system. Article 25-A of the Constitution clearly guarantees the fundamental right of education to all the children from age five to 16 without any discrimination on special needs, but studies show that there are over 8 million special children in the country who don’t go to school because they just can’t, as facilities and government attention are nowhere to be found. This is a clear violation of a fundamental human right.

It is also the violation of the Convention on the Rights of Persons with Disabilities (CRPD), which has been signed by 153 countries including Pakistan, which on July 5 this year, became one of 107 countries to have ratified it. The most fundamental principle of the convention is to change society by making it more inclusive, barrier-free and rights-based.

Children with disabilities are routinely denied access to health, education and social services. At the same time, they are often excluded from opportunities to participate in their communities and are more vulnerable to violence and abuse.

Hence, it is the prime responsibility of our state to provide an inclusive environment and facilities to ensure their fundamental rights. It is also the duty of philanthropists to come forward and play their role in setting up institutions for the disabled, particularly in the forgotten rural areas.