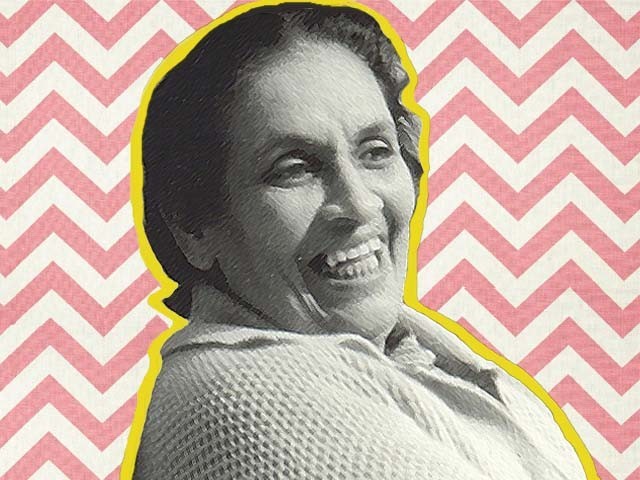 In a field boasting the likes of her predecessors like Rashid Jahan and contemporaries like Ismat Chughtai, she held her own in her own lifetime. However unlike Jahan and Chughtai, following her passing away, her voluminous oeuvre of work consisting of some six novels, numerous collections of short stories and more than 40 translations (including those from Bertolt Brecht and Chingiz Aitmatov) still await critical appraisal as well as translation into English. 2017-2018 marked her birth centenary, and this translation of one of her short-stories is presented here in the hope that it will spur renewed interest in her life and work. 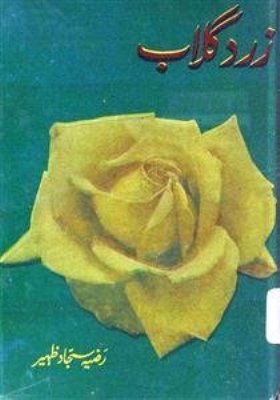 ‘The Yellow Rose’, from her eponymous collection, is one of Razia Sajjad Zaheer’s most successful short stories. Some artist, by the force of the pen, by allusion, has shown the painful story of his love in a painting, by revealing the loneliness of the yellow rose; and another artist by understanding the pain and depth of this love story has narrated it by using some more allusions and metaphors. One can guess the beauty with which this story has been composed by reading it – its brevity, allusion and impact are undeniable. Presented below is my original English translation of ‘The Yellow Rose’.

“Yes, this is the same picture – the same one which had been hanging in our dining room since God knows how long – the same one, a huge sort of heavy picture which had covered almost half the wall,  the same frame too was present then, this same wide golden frame on which an embroidered lattice was woven. By the way, its polish had worn out everywhere. There was the same meeting of darkness and redness in the background, as if the darkness of night was advancing over the drowning golden redness of the sun; the dark green tablecloth kept in front, whose shine revealed it to be of plush or velvet; a large round flowerpot of cut-glass, a part of which was glittering through the light coming from the window; a bunch of big colourful roses attached to it – and near the flowerpot, a yellow rose kept on the tablecloth, perhaps the painter had made it yellow for the reason that to wither away was its fate – to be the first to leave its comrades, be separated from all the other flowers, how had it fallen! Why had it become alone, it appeared to be so weak and helpless. It also felt as if all the other roses were looking at it with longing but could not do anything, they could not but help pick it up and rejoin it in the bunch with themselves.

I had been seeing this picture since I was very young. Beneath it was the fireplace and between the former and the latter a stone – that thinnish marble stone on which there were the photographs of many relatives. During winters, the crackling fire of the wood would burn, scattering sparks, and our late abba would sometimes sit there and recite the verses of Mir Anees for us. When the flames of the fire would leap, their glare would fall on that yellow rose, when the lights would be out, even then that yellow rose could be seen in the darkness; and when the first ray of the sun would look in from the skylight at the crack of dawn, for a brief moment, the rose seemed to come alive.

The greatest hustle-bustle took place in this same room. The whole family would gather at some occasion, there would be parties, poetry recitals, jokes would be narrated; sometimes when the adults were not around we kids would have pillow fights and play dark room after closing the windows and putting out the lights. At these moments, sometimes my eyes would suddenly fall over that rose and I would stop short while playing. How did it become separated from the others? How much better it would have been had it too been put in the flowerpot, it has roses of all colours, except this one, so why was it not put back. Maybe it must have remained placed, but fell down after detaching – How must it have detached?

I remember that one day I had silently tried to even touch that yellow rose, I climbed on top of a chair by placing it on a small table which I had moved from its place, I touched it by extending my hand, but I felt as if it was a bit coldish and that’s it; it did not appear to be that attractive upon being viewed in proximity as it did from afar, it appeared to be just a rough yellow stain.

Then one day while having breakfast, I had asked ammi, “Ammi, who had made this painting.” My mother was very taciturn – remained silent!

Abba looked at her once, then towards me and said, “Beti, it was made by your maamu.”

“No – you have not seen that particular maamu of yours, he made paintings and used to be very sick, he gifted it to your ammi, he was her paternal cousin.”

“But abba, I do not like this painting”, I said.

Ammi looked at me, startled. “Why jaan beti, don’t you like it?”

“Ammi, why has maamu thrown this yellow rose down from the bunch? Why didn’t he place it there, in the flowerpot? Abba how did it get separated from the other roses?”

Abba stood up, turned to look at the painting once, then at ammi, she sat silently with head bowed, then he caressed me and left for college.

I kept looking at it, while eating my porridge, sitting on the chair.

The background of twilight, the darkness advancing over light, the green plush tablecloth like the shiny silk grass grown over a fresh grave, the shining cut-glass flowerpot on it, the bunch of colourful roses – and apart from the others, farthest from all, separate from all, withering – that one yellow rose!

Then time dripped drop by drop – and ceased where I got a telegram that ammi had passed away. She had been ill only for a few days and had had me conveyed in writing not to come; that how will I be able to travel so far with two young children, when I’ll get better, I’ll come myself – so I arrived when the whole  building had become a ruin with the falling of a column. The household had become smaller by just a person, but she had taken the entire cheer of the home with her.

As per her wishes, my abba had given the key to her room to me, “Take this beti, probably it’s mentioned on everything what should be done with it, so that you won’t have to bother much. Your mother had arranged all this when she was not too ill, but probably she got to know that she will not survive.”

When I was about to go with the key to ammi’s room from the dining room, I saw that painting was not there. The fireplace was empty, although the distance across which it had hung, there was a slight line of some dust and cobweb drawn according to its size, making a sort of frame – the heart gasped –I could not remember a time when that painting had not been there. I retraced my steps towards abba in the corridor, “Abba – why did you have that painting of roses removed from the fireplace?”

He said, “Beti– it was removed by your ammi herself, she has had it placed in her room too.”

No other obligation is more rasping for the spirit than to obtain things owned by some dear departed. Sometimes one feels an affection for these things, that they once belonged to him or her; sometimes hatred, that if they could not be faithful to him or her, how could they ever be faithful to anybody else. One by one a storm of memories was rising – when was it bought, where, with how much keenness, with what fondness was it brought home to be shown to everyone with relish – this was given by so and so, on the birthday, on the new year, on Eid, on the wedding anniversary – everything had a tag – to be given to whom, when, why, directions even for the mattress, silk blanket and dolai on the bed.

The aroma of incense filled the entire room which had created some mysterious, spiritual atmosphere, and also some suffocation, which disturbed me.

When I retraced my steps near the door to close it after viewing all the furniture, my elbow collided with that wall – it was kept on the floor against the wall near the door. Although it appeared so huge even when hung on the wall, but it appeared even larger now placed on the floor; there was a thin paper of almond colour wrapped on it, tied with a string.

At once, my heart wished to see it, for years while eating with ammi, it could always be seen hung in front, whenever I came home from my in-laws, it could be seen on the fireplace, often ammi had embraced me upon arriving standing beneath it, had said Khuda Hafiz caressing me while leaving – as if that painting was a part of ammi’s existence. I could not feel that I had come at ammi’s home without seeing it.

I opened the string tied on it, then removed the paper, in a corner of the golden frame where the polish was greatly worn, was a tiny scrap of paper, folded, stuck between the frame and one end of the painting – my heart began to beat – what if ammi had willed this painting too to be given to someone, it wasn’t unlike her generosity, maybe to gift it away! But nobody else could take it except me. I will not let anyone give it away – afraid, I took out the folded scrap, my name was written on its upper fold!

I unfolded the scrap with trembling hands and trickling tears, the words appeared misty from behind the curtain of tears. It was written:

“Zarina beti – you had once asked me how did this yellow rose get separated from the bunch. You were too young at that time, how could I make you understand – and then many things Man can never bring onto his tongue, not even say to one’s own children. But now time will make you understand how someone separates from his dear ones with such helplessness and weakness. No flower wants to leave the bunch, but it has to leave. I hold this painting dearer than all my things, so this is for you. I will not have any home now, but may God preserve your home. Put it over the fireplace in your dining room and love it always.

Yes, so this is the same painting, the background of twilight, the darkness advancing over light, the green plush tablecloth, like the shiny silk grass grown over a fresh grave, the glittering cut-glass flowerpot on it, the bunch of colorful roses – and apart from the others, farthest from all, separate from all, withering – that one yellow rose!”