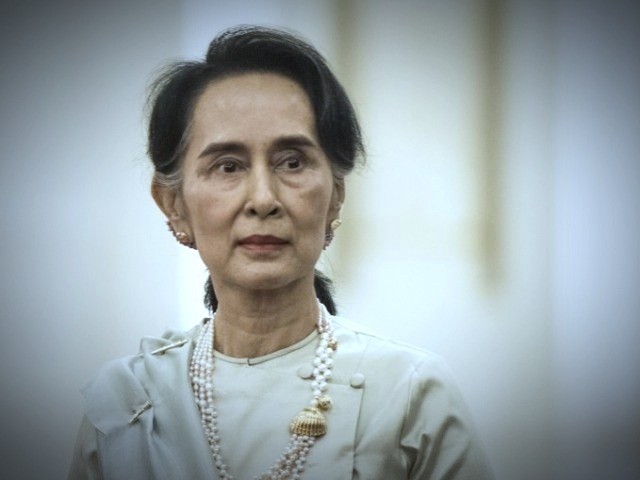 The Noble Peace Prize winner is representing Myanmar at the International Court of Justice. PHOTO:AFP

Allegations of genocide have been levelled against Myanmar ever since the persecution and forced migration of the Rohingya community, based in northern Rakhine, began. Gambia’s minister of justice decided to take Myanmar to the ICJ on the pretext of violating the United Nations’ (UN) Convention on Genocide 1948, relying on the 2018 and 2019 reports of Independent International Fact-Finding Mission on Myanmar (FFM) as well as on the Independent Investigative Mechanism for Myanmar (IIMM).

The convention on genocide was adopted after UN’s declaration under the resolution 96 (1) declared it a crime under international law. The convention defines genocide as,

“The denial of the right of existence of entire human groups.”

Article III of the convention lists a series of actions that are punishable which include :

The ICJ, under UN’s chapter XIV derives its mandate to adjudicate between states and can therefore, establish a state’s responsibility as compared to the International Criminal Court’s (ICC) which is only empowered to ascertain an individual’s responsibility.

A state may take another state to the ICJ on the basis of a dispute. On the face of things, it would appear that Gambia does not have a direct dispute with Myanmar. However, Gambia has established its case on the basis of Article IX enshrined in the convention on genocide which states:

“Disputes between the contracting parties relating to the interpretation, application or fulfillment of the present Convention, including those relating to the responsibility of a State for genocide or for any other acts enumerated in article III, shall be submitted to the ICJ at the request of any of the parties to the dispute.”

Additionally, article 36(2) of the statute of the ICJ states:

“The states parties to the present Statute may at any time declare that they recognize as compulsory ipso facto and without special agreement, in relation to any other state accepting the same obligation, the jurisdiction of the Court in all legal disputes concerning:

In short, Gambia says that since both states are parties to the treaty and neither have attached reservations against Article IX, it has a right to take Myanmar to the ICJ.

Furthermore, Gambia, in its legal application, states that, on numerous occasions, it issued statements over Myanmar’s treatment of the Rohingya community including a note verbale on October 2019. It further states that the filing of an application against the on-going genocide in Myanmar against the Rohingya is a jus cogens norm (norms from which no derogation is permitted), erga omnes and erga omnes partes obligations (obligation towards all).

Interestingly, Gambia wants to cover two grounds; firstly, the nature of genocide and secondly, the responsibility of the international community. It has also asked for an ad-hoc tribunal or for an international penal tribunal via the ICC for the punishment of the perpetrators.

Myanmar’s Nobel Peace Prize winner Aung San Suu Kyi, who once enjoyed the reputation of defying the military dictatorship, has repeatedly defended the state’s human rights violations. Deciding to appear at The Hague in person, she plead before 17 judges, asking the court to dismiss the allegations of genocide against Myanmar, categorising them as an internal matter. She also assured the honourable judges that if it was ascertained that certain individuals were guilty of war crimes, they would be dealt with under the state’s court-martial system.

She repeatedly avoided the word Rohingya during her speech which the court took note of and in response, stated that:

“Not a word about the women and girls of Myanmar who have been subjected to these awful serial violations. Madame Agent (Aung San Suu Kyi), your silence says far more than your words.”

Ideally, there should be a separate inquiry regarding the acts of sexual violence perpetrated against the Rohingya women by the government of Myanmar, its people and the army. Minister of Justice of Gambia Abubacarr Tambadou remarked that it has taken Myanmar to court in the name of humanity and therefore, believes it is not a matter of one state against the rest, but about protecting and improving a process that may be somewhat slow, but is effective at achieving the purpose it was created for.

An International Relatoins graduate from Kinnaird, Faiz follower and a reader.