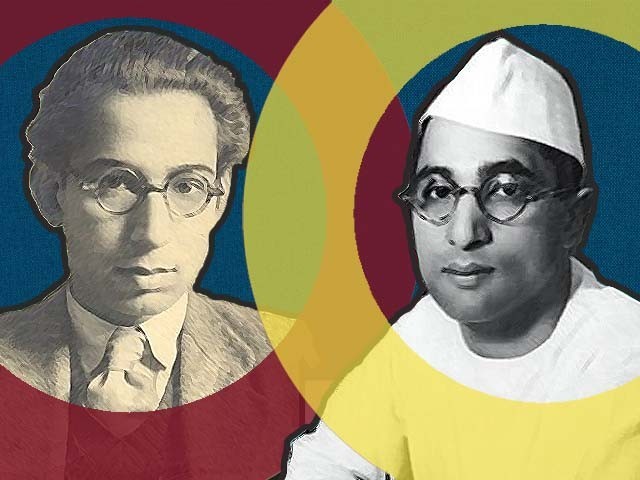 A sizable amount of literature suggests that the Left supported the Pakistan Movement. However, a deeper reading into the politics of the Left in the crucial last decade of the British Raj reveals a far more complex situation. In 1936, three young communists, namely ZA Ahmad, Sajjad Zaheer and Kunwar Muhammad Ashraf, upon the alleged instructions of the Communist Party of India (CPI) [1], joined the All India Congress Committee under Nehru’s presidency. Nehru had initiated the Muslim Mass-contact Programme (MMCP) to increase the Muslim members of Congress and had placed it under KM Ashraf. He and his two comrades started the weekly Hindustan, attacking Sir Syed Ahmed Khan,[2] deriding Muslim League leaders as compradors allied with the British[3] and a club of upper-class gentlemen.[4] The MMCP, however, fizzled out before the Congress ministries resigned in 1939.[5] This was also before the Muslim League presented the famous Lahore Resolution in March 1940 which was promptly condemned by Soviet theoreticians A Dyakov and V Bushevich.[6]

However, in February 1942 the General-Secretary of the CPI, Puran Chand Joshi, in his policy statement, declared it was “wrong and unrealistic” to dismiss the Muslim League as reactionary.[7] Another CPI leader, Gangadhar Adhikari in August 1942 described the communal problem as that of “growing nationalities” that could be resolved by recognising the “right to self-determination”.[8] In September, the CPI called for unity between Congress and Muslim League in a resolution.[9]  Rajani Palme Dutt of the British Communist Party also reversed his earlier stand against the Muslim League by asking Congress to make “far-reaching concessions” with the League for the sake of unity.[10] K. M. Ashraf also changed tack along with Sajjad Zaheer when they, in May of 1942, supported Rajagopalachari’s resolution in All India Congress Committee (AICC) to accept Pakistan in principle.[11]

Adhikari took pains to explain that the CPI had changed their stance as they recognised Muslim League’s growing potential between 1936 and 1940, invoking Stalin’s 1913 thesis on nationalities.[12] However, Shri Prakash’s article in Bipan Chandra’s “The Indian Left – Critical Appraisals” titled, “CPI and the Pakistan Movement” attributes this change of heart to two factors: Hitler’s attack on Soviet Union and the Japanese threat to British India. Both these factors forced the communists to align with the British on the war-front, to seek the league’s support alongside the British, endeavour for a national front through unity between Congress and League and finally, to reject the “Quit India” movement against the British in 1942.[13]

The communists essentially reshaped the Pakistan demand to “self-determination of Muslim nationalities (i.e. Bihari, Bengali, Pathan etc)” in order to make it congruent with Stalin’s thesis, while categorically stating that they had “nothing in common with the separatist theory of dividing India into two nations on the basis of religion.”[14] Moreover, they also spoke out against “any proposal to disintegrate India” in the same resolution.

It is interesting to note that Stalin wrote his thesis in 1913 and it was translated to English in 1935. Why did his thesis not endear itself to the communists during the Muslim Mass-Contact Programme of the late 30s? Why did they have a change of heart suddenly in 1942? This drives home the point that CPI’s support for Pakistan (even in principle) was tactical rather than ideological.

Then comes the oft-repeated story of the eminent leftist Daniyal Latifi joining the Muslim League, resigning from CPI and drafting its manifesto for Punjab for the 1945-1946 General Elections. As per Mushir-ul-Hasan in “Legacy of a Divided Nation”, Latifi, Mian Iftikharuddin and Ataullah Jahaniah were sent by the CPI to the League, similar to their incursion into  Congress in 1936, to make the League’s leaders more amenable to CPI politics.[15] Latifi’s main beef was with the “last British stronghold” of Punjab under the Unionist Party headed by landed elite. He mentions this himself in his letter to Gandhi dated 26th June 1944.[16] However, Jinnah and Liaquat Ali Khan, the two most eminent Muslim League leaders at the time, grew suspicious of the communists. Jinnah wanted them to be expelled from the party.[17]

Liaquat placed the condition that all communists in the Muslim League would have to resign from CPI.[18] The Communist Party of Punjab consequently ordered Latifi and others to resign and they complied.[19]

The second World War finished in August 1945 on both fronts. The General Elections, in which the Unionists had to be defeated, were in December. The Muslim League won comprehensively and this is where all contemporary Pakistani accounts of the Left’s support for Pakistan Movement seem to end. However, there is more.

In December 1945, the CPI described the Muslim League’s demand for six provinces as ‘greedy’.[20] The path to self-determination now went through 17 different constituent assemblies.[21] RP Dutt started criticising the League again in March 1946.[22] In April of the same year, in its memorandum to the Cabinet Mission, the CPI dropped its support of Pakistan and replaced it with demand of self-determination of linguistically demarcated provinces.[23] In August, they declared that Pakistan reflected:

“the policy of the Muslim bourgeois’ feudal vested interests, who are seeking for a compromise with imperialism for a share of administration in a divided India”.[24]

Sajjad Zaheer also reverted his support for Pakistan in his article in the “People’s Age” dated 21st April 1946.[25] Adhikari made a u-turn as well, describing the demand for Pakistan as undemocratic.[26] In 1947, the attitude of the communists, as per CPI’s political resolution of June, was that of painting the League as British conspirators.[27]

When Pakistan came into being, both Sajjad Zaheer and KM Ashraf were sent there by CPI to support the communist ideology. [28] Sajjad Zaheer would later be a fundamental part of the Rawalpindi Conspiracy to overthrow Prime Minister Liaquat Ali Khan. In Hasan Zaheer’s ‘The Times and Trial of the Rawalpindi Conspiracy 1951’ he quotes Zaheer as saying :

“All roads led to socialism means to jump at any adventure.”[29]

The Left’s relationship with Pakistan is thus much more complex than normally portrayed.

[19] Muhammad Ameer Hamzah, “Role of the Communist Party of India in Pakistan Movement with Reference to the Right of Self-Determination”.

[27] Statement of Punjab Committee of CPI, “Save Punjab, Save India”. Also passed as official resolution of CPI in October 1947.

Can the Indus Delta be saved by the construction of Diamer-Bhasha dam?

Was Pakistan always destined to become an Islamic republic? – Part 2

Was Pakistan always destined to become an Islamic republic? - Part 1