Edhi we love you 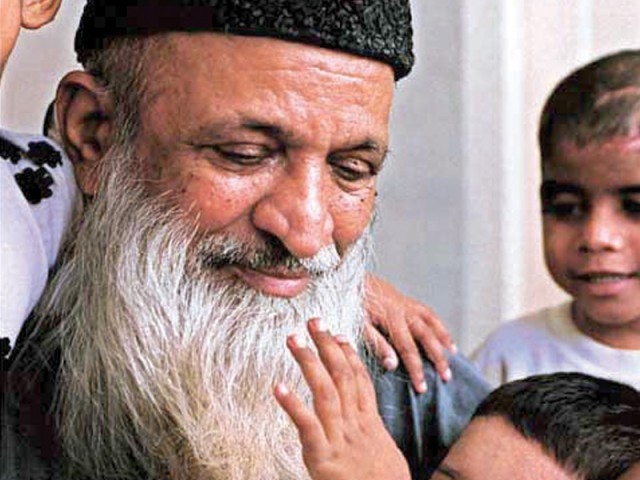 Our Prime Minister has nominated Abdul Sattar Edhi for the Nobel Prize.

On November 28, 2011, the Prime Minister of Pakistan nominated Abdul Sattar Edhi for a Nobel Prize. For Pakistanis and most other people around the world, Abdul Sattar Edhi is a name that requires no introduction.

The founder of the largest welfare organization in Pakistan, the ‘Edhi Foundation’, Edhi has been referred to as an inspiration, a saviour, and a living saint. For those who know his story, he is no less than a legend who has overcome the odds to accomplish a selfless goal that has helped millions see a glimmer of hope amidst the darkness.

Edhi has lived to serve the nation. His journey started when he was eleven-years-old. His mother was paralyzed and mentally ill. Edhi took full responsibility of caring for her needs, from bathing and feeding her to being there as a source of support to her. Despite his care, unfortunately his mother died when Edhi was 19-years-old. Her death affected him so much that he could not complete high school. However, instead of growing bitter about the fact that no one had helped his family when they were in need, Edhi focused on what he could do considering the millions of other destitute people who needed help.

With little resources and a big dream, Edhi set off to beg on the streets for money, with which he bought his first ambulance – an old van. Equipped with the prayers of those whom he helped, and continuing forward on a mission, the Edhi Foundation today runs the world’s largest ambulatory service.

At the age of 20, Edhi volunteered at a charity in Karachi. However, he was appalled to learn that the charity only helped a certain sect of people, ignoring the others who were equally, if not more, stricken. He protested against this discrimination towards the poor, and set up his own charity instead. However, in doing so, he secured the enmity of the sect he had protested against, and thinking his life was in danger, he left Pakistan and begged his way through Europe. Becoming an admirer for the Welfare State System, he decided that if the government couldn’t help the people, he would do whatever was in his capacity to fulfill that gap.

Edhi  has helped people in Middle East, Africa, Europe, and even the USA. He has won countless national and international awards for his humanitarianism and philanthropy. Edhi said he plans on giving the Pakistani government a plan for a welfare system for the poor. What is most commendable is that the Edhi Foundation does not take any aid from the Pakistani government as it wishes to maintain its independence.

Edhi has indeed touched the lives of many people in Pakistan. He is the sort of philanthropist will forget to take his medicines and vanish for days to help people in need. He travels to remote, dangerous places, without security, simply to help those who aren’t receiving help from others. He is the sort of human being who declares boldly that he is merely a humanist, not God, when people, mesmerized by his mercy move to worship him.

When nominated for the Nobel Peace Prize, he stated with the greatest of humility that he is a mere “faqir” (beggar) and that the nomination has made him very happy. Moreover, speaking on the news on Monday, Edhi said he was honoured to have been nominated for the Nobel Peace Prize, as the prize money and recognition would further his aims of helping others.

Edhi is the most selfless human being  Pakistan has ever seen. There is indeed a lot that our government, and people around the world can learn from the selfless, true hero for humanity that is Abdul Sattar Edhi.