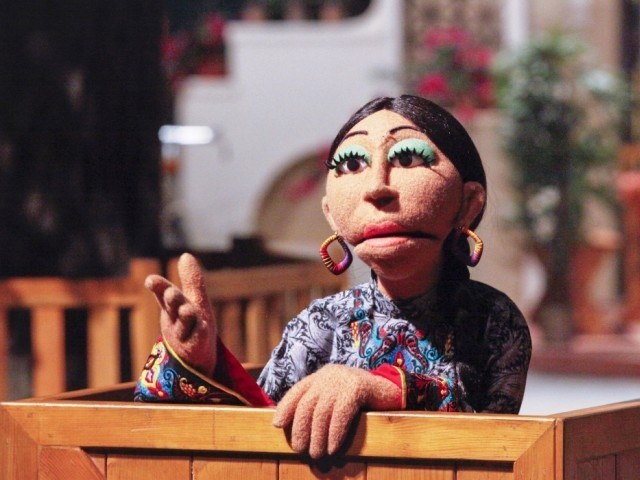 The Cast of Sim Sim Humara include the strong woman, Baji, introduced to empower women in Pakistan. PHOTO: REUTERS

Back in 1966, when the discussions about a television show to help young children prepare for school were under way, who would have thought that 45 years later, the resulting show would be preparing children for school all over the world; across 120 countries, through twenty independent international versions.

The latest addition to the Sesame Street Franchise is Sim Sim Hamara.

Sim Sim Hamara will start airing in Pakistan later next month. The four year project is a collaboration between Sesame Workshop and the Rafi Peer Theatre Workshop, funded by USAID’s US$20 million.

It seems as though Washington is now trying to quash the influence of radicalism in Pakistan even before it makes inroads into young minds. According to a former Education Officer of USAID, Larry Dolan:

“One of the key goals of the show in Pakistan is to increase tolerance toward groups like women and ethnic minorities.”

For this, a total of 78 episodes will be aired over the next three years in Urdu. Another 13 in Sindhi, as well as in Pashtu, Punjabi and Balochi are said to be on the cards.

Most grown-ups today will remember Elmo, Big Bird, Ernie, Bert, Oscar, Grover, Cookie Monster, and the Count. The list of characters is long and memorable. However, the famous crew will not be available in Pakistan – with the exception of Elmo.

The cast of Sim Sim Hamara will include Rani as the lead, a six-year-old girl who loves cricket and Pakistani music, flanked by Munna, a five-year-old obsessed with numbers (Pakistani version of Count). Baily the donkey, Haseen-o-Jameel, the Crocodile, and Baaji, the strong woman, are also amongst the few characters of the show that have been identified so far.

Sesame has successfully adapted to change over the years. Its various independent versions have seen characters introduced specifically to address the current issues in that society. For instance, to address the rising AIDS epidemic, Kami a five-year-old HIV-positive Muppet was introduced to Sesame’s South African version. In 2006, Abby Cadabby joined the show as its first female star character to provide a role model to young girls.

The ever growing popularity of Sesame Street can be gauged by the rise in its viewership over the years. When the original Sesame Street first aired on November 10th 1969, a reported 1.9 million households in America had tuned in. By 1979, the viewership had reached 9 million viewers.

A 1993 US Department of Education survey stated that out of a total of 6.6 million viewers, 2.4 million were kindergartners, while 86% of first and second graders had watched Sesame Street before starting school. While 74 million Americans claim to have watched Sesame Street while growing up, today, eight million young viewers tune in weekly in USA alone.

Evaluations conducted in the early 70s have shown Sesame’s positive educational impact on its viewers. Additional studies over the past four decades have shown a continued positive effect due to its content based on laboratory and formative research; following a curriculum “detailed or stated in terms of measurable outcomes.”

Over the years Sesame Street’s format has changed from a magazine type to a more narrative one, after research showed that its young viewers’ attention could be held for longer periods than first anticipated. The collection of short funny segments that some blamed for shrinking children’s attention span were phased out.

Since the very first guest appearance of James Earl Jones reading the Alphabet, 400 celebrities have followed. From US Presidents Clinton, and Obama and First Ladies Barbara Bush, Hillary Clinton, Laura Bush, and Michele Obama, to Hollywood Superstars like Michael Jackson.

According to the shows production team, guest stars help draw in parents and keep the show up to date. Whether Sim Sim Hamara will showcase Pakistan’s A-list or not, I cannot say, but I do hope that Sesame’s Pakistani twist will keep the essence of Sesame Street alive.

In case you’re in the mood to reminisce, check out the most recent version of the Sesame Street theme song below:

A broadcast journalist who currently works at Geo News.

The death of English news in Pakistan