The US media’s (biased) version of the NATO attack 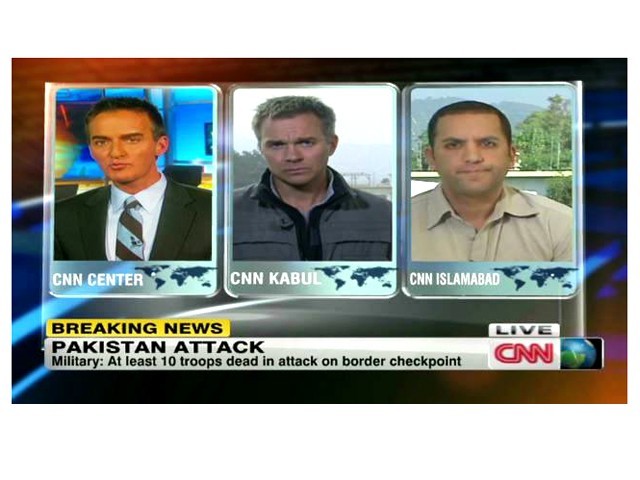 The US media has defended the NATO attack incident with its biased reporting, ignoring Pakistan's narrative.

While the Pakistani media paid serious attention to NATO strikes on a check-post near the Afghan border, the US media seemed to defend the incident with its biased reporting.

A blog on the TIME magazine website rejected the concept of a proper border between Pakistan and Afghanistan. The post states that:

“there is no well-defined difference between the Pakistani military and anti-American insurgents crowded along (the) rugged frontier.”

The report by Mark Thompson concludes that the American forces mistook Pakistani forces as Taliban militants by accident and were confused about the border demarcation between Pakistan and Afghanistan.

Perhaps Thompson does not know that the attacks were conducted through gunship helicopters and jets which are fully equipped with GPS and can easily distinguish between the borders of two countries. The author also conveniently forgot to mention what would have happened if a similar ‘mistake’ was made by Pakistani forces on NATO troops.

Another American newspaper The Washington Post also called the Pak-Afghan border poorly patrolled and ill-marked and claimed that it was the central sore point in Pak-US relations. The report linked the incident with US military officials’ claims that Pakistani intelligence has supported al-Qaeda and Taliban across the border. The Washington Post report tries to prove the existence of Taliban inside Pakistani territory near Afghan border.

“During previous exchanges of ground fire across the border, Pakistani officials have said that any firing from their side came from insurgents, not Pakistani troops.”

However, no specific reference to any statement of this kind by Pakistani officials was provided by the newspaper.

In a report published by New York Times, it is indicated that United States forces in eastern Afghanistan have taken more mortar and rocket fire from positions at, or near active Pakistani military posts in recent months, despite complaints to Pakistan about it. The report also reinforces the view that Pakistan has done nothing to respond to United States’ demands to do more against al-Qaeda and Haqqani network which allegedly operate from Pakistan.

American news network CNN’s headline read  “NATO admits fault in Pakistan attack”. However, while commenting on the NATO spokesperson’s statement, the channel said that there are insurgents living across the Afghan border in the Pakistani territory who frequently cross the border and attack US troops. However, another report, it included the statement of ISPR spokesperson Major General Athar Abbas:

“”There is no confusion about the locations of these check-posts. They are well inside the border, they are clearly marked and NATO has their location on their maps. There are no more safe heavens in Mohmand. We have cleared them. They would have nowhere to hide.”

While reporting the news about Pakistan’s review of relations with USA, the anchor labelled it as “punishment for USA rather than review”. According to Peter Begen, CNN National Security Analyst, the actions taken by Pakistan are not new. He said that Pakistan pressurizes USA in this way for ensuring that such actions don’t transpire another time. The analysts also mentioned previous incidents of Raymond Davis, Abbotabad operation, killing of security personnel by NATO etc., and hoped that the situation will become plain very soon.

“Much of the violence in Afghanistan is carried out by insurgents that are based just across the border in Pakistan. Coalition forces are not allowed to cross the frontier to attack the militants. The militants, however, sometimes fire artillery and rockets across the line, reportedly from locations close to Pakistani army posts.”

With reference to American officials, it accused Pakistani forces of turning a blind eye to militants who use Pakistani territory for cross-border attacks. The newspaper termed the border as the biggest source of tension between Islamabad and Washington.

“Coalition forces are not allowed to cross the frontier to attack the militants. However, the militants sometimes fire artillery and rockets across the line, reportedly from locations close to Pakistani army posts.”

It is a frequent practice of American media to present one side of the picture. They don’t highlight Pakistan’s concerns on its sovereignty and the impact of drone attacks. As a result, the American public believes that Pakistan supports terrorism, despite the facts that Pakistan has experienced the greatest number of causalities in the war against terrorism.

It is the need of the hour that Pakistan’s Ministry of Information as well as Ministry of Foreign Affairs should be strong enough to influence the international media for propagating our views and contributions towards a peaceful world.

Editor of the Weekly Mission who tweets @egulfam

Education must not be ignored in the next budget