Team Green: Wish you all the best! 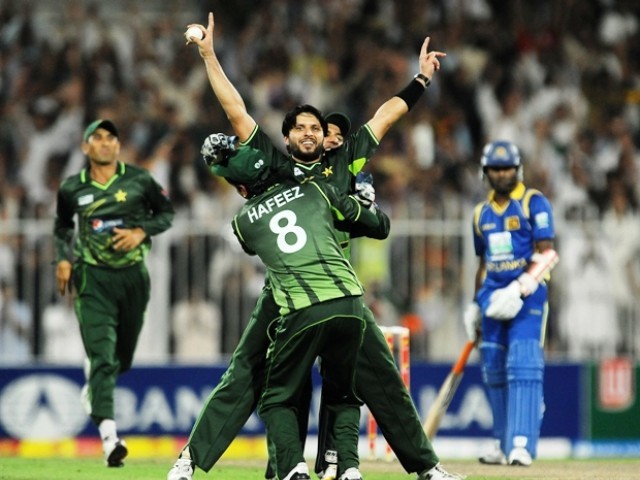 With strong players like Shahid Afridi, Younus Khan, and Umar Akmal, Pakistan can maintain its good rankings in the coming year. PHOTO: AFP

Last year in November 2010, Pakistan cricket was going through a very tough time. Already reeling under the dark clouds of spot-fixing shenanigans, a representative team lost to Afghanistan in the semi-finals of the Asian Games in China.

As always, a loss in Pakistan is attributed to match-fixing while a win is credited to ‘qaum kee duayen’ (the nation’s prayers).

“How can Pakistan bounce back from this low of losing talented cricketers with the cricket World Cup just a few months away?”

This was the question which perturbed many Pakistani fans like me. But as they say, the sun needs to set for it to rise again, and how the Pakistan Cricket Team has risen!

In the last 12 months, beginning December 2010, Pakistan has won 50% of the Test matches it has played (played eight, won four). This record is topped by England only. Moreover, in ODIs, Pakistan has a winning percentage of a whooping 75 (played 29 and won 21) which is the best for any mainstream team.

Admittedly, they surprised a lot of pundits by reaching the semi-finals of the cricket World Cup. Our cricket team not only ranked the highest in their group, but beat teams like Sri Lanka, Australia and West Indies on their way. This is no mean achievement given that there were significant personality clashes in the camp, be it between Shahid Afridi and Waqar Younis, Shahid Afridi and Ijaz Butt, or Shoaib Akhter and Kamran Akmal.

We have also seen Pakistan improve its rankings in the league of teams. It has reached the number fifth spot in ODIs and ranks sixth in the Test rankings. With the next assignment in Bangladesh, we can expect the team to cement its fifth place in ODIs and we can hope for it to improve by one rank in Tests to reach the number five spot.

The next real test, however, for Pakistan will be against the English in January 2012, and one can expect that the momentum they have built will allow them to continue their good run of form. It is inspiring to see Saeed Ajmal as the top ODI bowler in ICC rankings, with Shahid Afridi and Mohammed Hafeez in the top ten. This is such a tremendous achievement for Pakistan, and we should be very proud of our players.

Similarly in Test rankings, Saeed Ajmal ranks number nine and is likely to be joined by Umar Gul in the top ten, if he performs well against Bangladesh. Batting has been our Achilles Heel ever since Inzi and Yousuf faded, yet we can see Misbah and Younis, and Umar Akmal galloping towards the top ten in Tests and ODI rankings respectively.

It is heartening to see the team perform as a unit after experiencing the sort of turmoil that they have in the last year. A very strong and disciplined captain, Misbah ul Haq has to be given credit for leading the team past perhaps one of the darkest times it has ever seen. Now, our nation and our team must let bygones be bygones; whatever has happened cannot be undone. We need to move on and acquire discipline on and off the field. This will be key to Pakistan becoming a top team in 2012.

I would like to wish Team Green the very best and would like to congratulate Misbah ul Haq and Mohsin Khan for bringing good results to the country.

I watched Pakistan scare the Kangaroos

US airports: (Not) a humiliating experience