How a garbage epidemic is choking the Baltoro Glacier 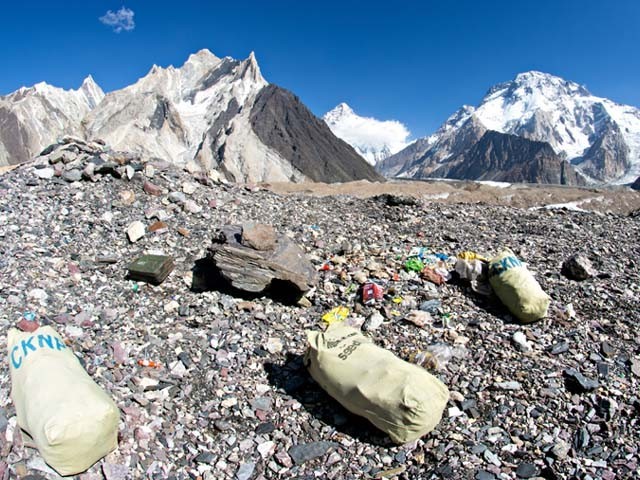 The northern part of Pakistan is known for its scenic beauty, tall mountains and cold climate. These very attributes have draw tourists from across the world to the region for more than a century. These visitors include those wishing to get away from the hustle bustle of the city as well as mountaineers and trekkers looking for adventure. Among the various attractions of this area, the Baltoro Glacier stands out prominently since, at 62 kilometres, not only is it the longest glacier outside the polar region but it also leads to Concordia, where Baltoro and Godwin Austin glaciers meet and make up a doorway to four peaks with a height greater than 8,000 meters.

In the past, mostly foreign mountaineers visited the area, but due to the improved road networks, a far greater number of local tourists have also started visiting the glacier. According to a local resident, almost 5,000 tourists traversed the Baltoro glacier this year. Another interlocutor told me that more than 7,000 people visited the area in 2004 to mark the golden jubilee of the first K-2 summit.

But increased tourism brings with it many problems, with littering being the foremost issue in this case. A lack of awareness about just how hazardous pollution can be for the environment, and the absence of any robust cleaning infrastructure in the region, has resulted in visitors leaving behind thousands of kilograms of trash every year. One can hardly walk a few meters without spotting an empty pack of biscuits, a box of cigarettes or a discarded article of clothing. To make matters worse, some visitors even relieve themselves along the path and one can see plenty of feces, both human and animal. 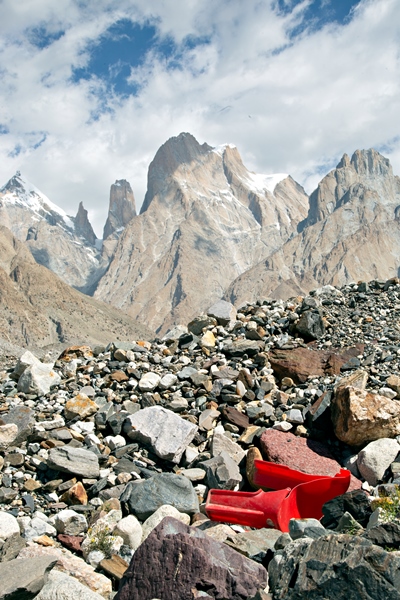 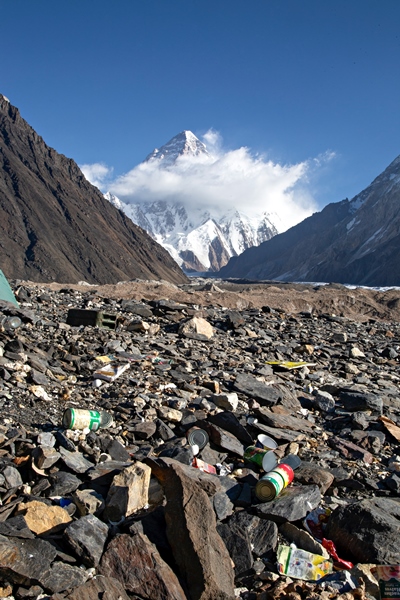 I witnessed this myself this year when I visited Baltoro as part of my assignment with the United Nations Development Programme (UNDP) to photograph their GLOF II project. Thankfully, glacial cleaning in both Khyber Pakhtunkhwa and Gilgit-Baltistan is part of their programme. Funded by the Green Climate Fund, the $36.9 million project is focusing on improving the condition of these glaciers.

Since the tourism industry has not developed in a systematic manner, the tourism sector is feeling the strain of the increased number of visitors. There is a dearth of porters for the long treks and ones who are present are demanding higher wages. Consequently, tour operators and guides have started relying more upon mules than porters. As a result, the whole path is strewn with dung. These animals are often overloaded with luggage and underfed, which is why one also comes across rotting carcasses of mules along the way. 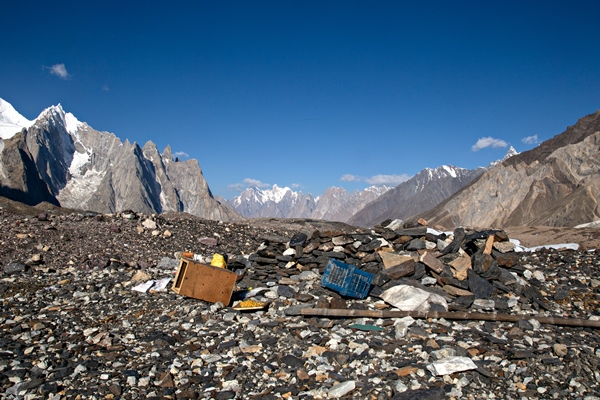 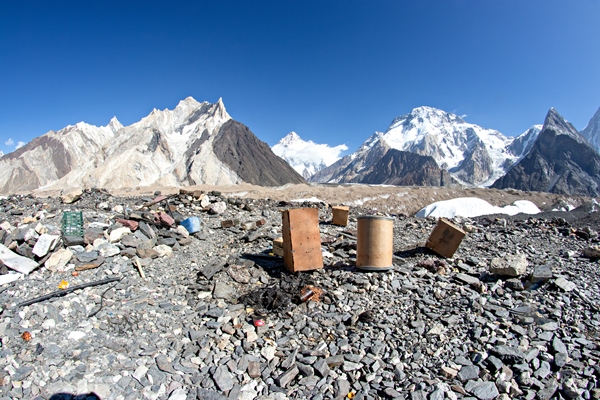 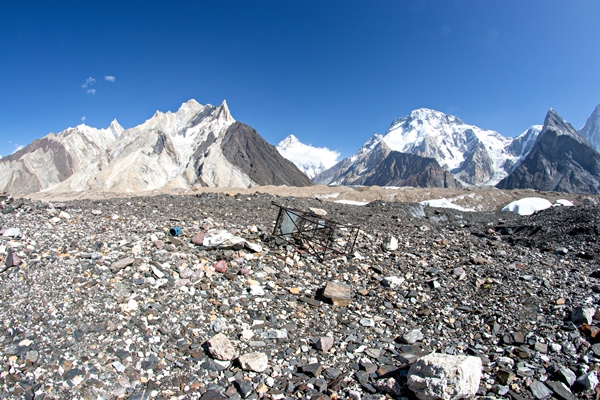 The road from Shigar ends at the villages of Askoli, Korphe and Testey before the trek starts. It is mostly the residents of these villages who serve as guides and porters along the trek. According to them, the cleanliness situation was much better about a decade ago when the Mountain and Glacier Protection Organisation (MGPO) was working in region. They built camping sites, installed portable toilets and conducted clean-up operations. This area had been declared a national park in 1993 and was named the Central Karakoram National Park (CKNP). However, the local residents expressed extreme dissatisfaction with the performance of the park management. At Ayesha Camp at the start of the trek, there lies nearly three years worth of accumulated trash. According to the CKNP employees I interviewed, the amount of trash weighed about 2,710 kilograms. It was not being disposed of because at the time the incinerator, which burns the garbage in the region, had been inactive for more than a month. 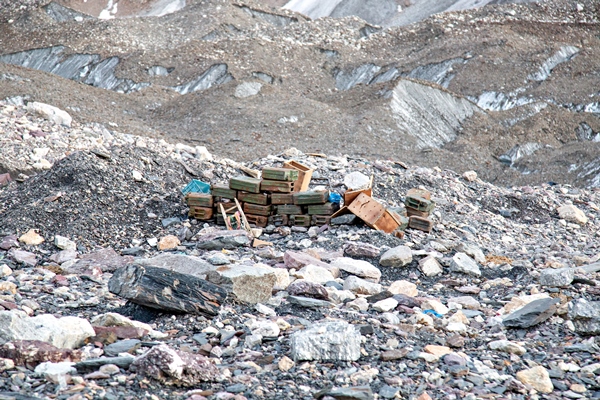 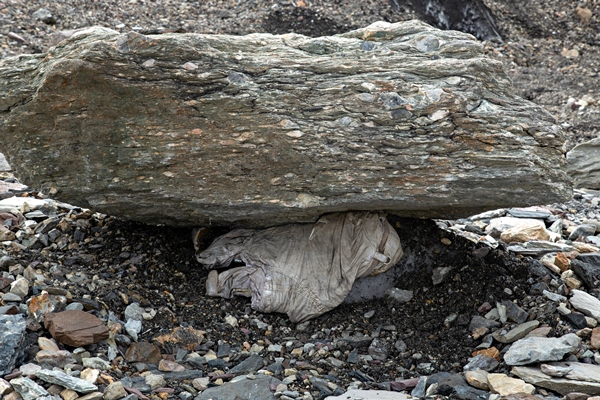 The local residents also reported that a single individual had been contracted to clean up the trek all the way down from Concordia. According to them, the said individual was not hiring the required manpower and the trash was being gathered and stuffed into the crevices of the glacier.

When asked about why the community was not involved in the clean-up, the locals said that while the MGPO was active in the area, they would pay Rs8,000 for each 25 kilograms of trash brought to Askoli, but CKNP only offered half of the money for the same weight. This offer did not entice the locals enough to join in the hard work of trash collection. It was interesting to note that the campsite at Paiju, which is maintained by the people of Testey, seemed to be in much better condition than the ones maintained by CKNP at Jula and Ardukas. 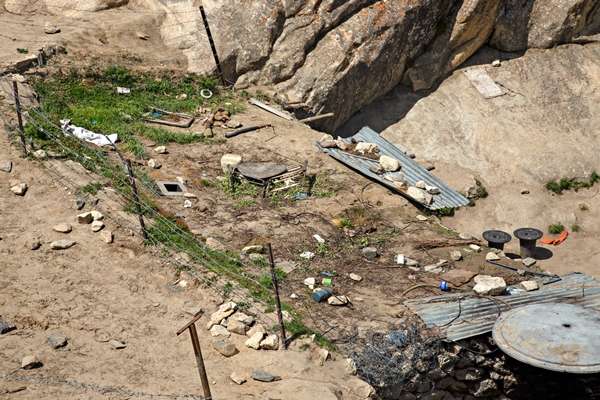 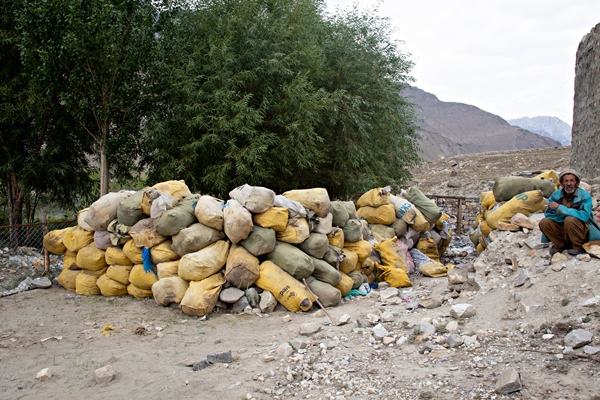 The locals were of the opinion that the only practical and effective way of keeping this trek clean would be for one organisation to take the responsibility itself instead of outsourcing the cleaning services. They feel that at the end of every season, at least 50 porters and 200 or so mules should be taken to Concordia with the purpose of going through the trek with a fine comb and collecting all the trash. If this exercise is repeated annually, most of the already accumulated trash can also be removed and further litter can be prevented from accumulating.

(All photos courtesy of Jamil Akhtar)

Jamil Akhtar is an award-winning writer and photographer with extensive experience in different aspects of communication. He can be reached at [email protected]