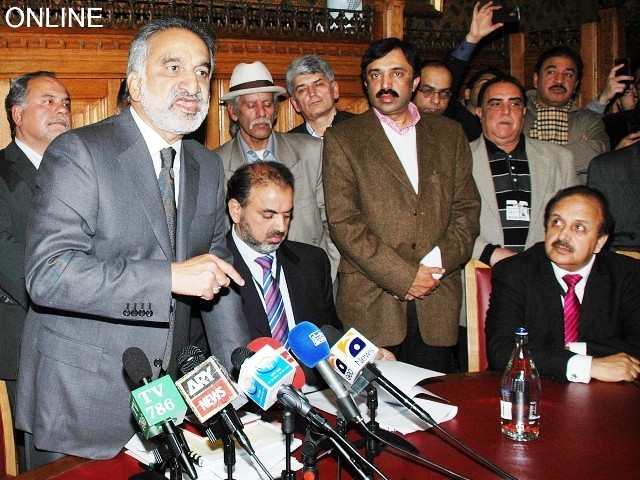 Visiting London to educate Scotland Yard about the antics of MQM, Mirza got the chance to speak at my university. PHOTO: ONLINE

Being optimistic is an uphill task in the best of times in our chequered past and present. It takes quite a lot to indulge along the elusive lines of buoyancy and change for the future, considering all the mess we have created for ourselves, right from the political playing field to the murky arena of sports. Recently, my sense of optimism got a stark beating, if not a down-right reality check.

A lot has already been written about the tirades of and against Zulfiqar Mirza. Interesting and entertaining at the same time, I never thought that Mirza would help me understand more acutely the mess we have dug ourselves in.

Visiting London to educate Scotland Yard about the antics of MQM, he got the chance to speak at my university. Before Mirza could even launch into his speech, a couple of members in the audience stood up and started criticising him for his overtly anti-MQM stance. Things got really heated, and within a couple of minutes, took on a physical meaning. Having never witnessed grown men wrestle before, let me assure you that it is not a sight worth revisiting.

This small incident underscores the national psyche and sentiment prevalent in the air amidst us these days – one of deep distrust and intolerance. The scary thing which tops it all is our ready inclination, rather Pavlovian attraction, to the use of violence. This belief that by stampeding all opposition with brute force now emanates from all aspects of society – right from the baton-ready policeman to the ‘good teacher’ who believes in caning students. But violence stomping out debate and argument – essential nuggets in any society that wants to stimulate deep thinking and reflection – sadly may explain why rationale and a non-biased opinion, based more on facts rather than emotion, seem to be gradually ebbing away from discourse in society.

Returning to the fiasco with Mirza, it was actually poetic irony at play; the place where Mirza was giving his speech, was bang on top of one of the most famous social sciences libraries in the world. It takes quite a lot to shout, let alone start fights in a library space. Of course, once the ruckus died down, there was a round of applause from the hard-core Mirza supporters in attendance. I could not quite understand what the cheering was for – have we reached that stage of moral destituteness that we pride ourselves in wiping off all opposition? Instead of being deeply embarrassed, both sides stuck to their guns, no one truly understanding that at that particular spot in that particular place, it was Pakistan taking a hit and nothing else. Students and staff alike were aghast as to what transpired, and to a neutral observer walking outside, it sounded and looked downright ludicrous and farcical.

I have never felt more ashamed and sorrowful. Playing theatrics is run-of-the-mill business in the shady niches of politics, but the environs have always to be taken into account. Addressing a student audience means instituting a dialogue that instils the core values of logical debate and rationality, not resorting to language sub-par. This is even more so if it is on an international level.

Of course, it takes two to tango. No doubt, the anti-Mirza campaigners came with a set agenda and a clear goal of disruption of the proceedings, if not direct coercion, and this is why I felt doubly ashamed. Everyone has heard Mirza now countless times, and having even an iota of grey cells, it does not take much to decipher the unruly antics of the MQM in Karachi. So is the next step in this saga going to be an outright resort to nonsensical violence? When all sane voices are being wiped out, and violence is the name of the game, there is indeed very little room for being optimistic.

A graduate student at Oxford who lives and breathes politics and healthcare issues. He tweets @MAliRai

The passport scam is a sorry start to the London Olympics

Dr Shakil Afridi's verdict: A can of worms

Heroin use in Pakistan: Deep and deadly