Why is the government refusing to address the smog crisis? 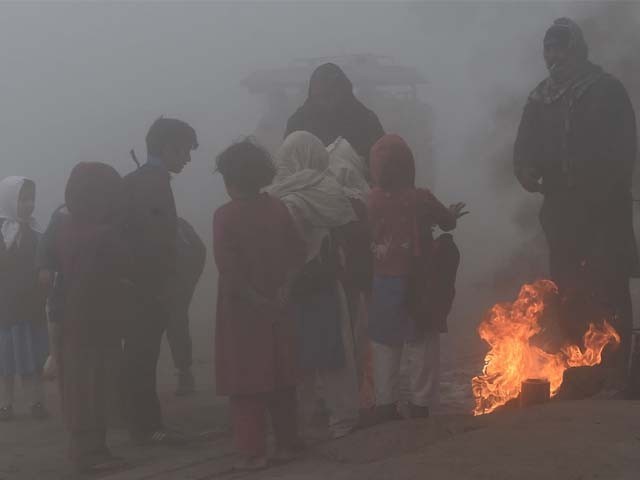 Pakistani school children stand around a wood fire as they wait for transport amid heavy smog. PHOTO: GETTY

A few weeks back in New Delhi, a climate emergency was invoked across the capital. Schools were closed and warning signs issued as the government activated a climate emergency. It was reported that many commuters in Delhi could not see beyond three to five feet ahead of them. Patients were brought into hospitals with acute respiratory infections and children wards were on high-alert. While the some equipped themselves with air purifiers and masks, a large segment of the general public on the streets continued to breathe in the toxic smog. Construction was temporarily banned in city limits as people with burning eye infections were admitted into hospitals. Life in the capital came to a standstill.

When tonnes of smoke or industrial emissions from farms, fields factories, turbines, cars and buses, go up in the skies and are mixed with atmospheric gases and sunlight, it creates light and dark brown fumes that form above the surface of the earth, resulting in smog. When the smoke from all the stubble burning is mixed with vehicle emissions and construction dust, it creates a massive toxic haze that remains in the air for days and weeks at times.

Similarly, in Pakistan, the city of Lahore registered the worst air quality in the country as this winter marked a dangerous smog-attack on the city. Crop burning, coal combustion, two stroke vehicles and industrial combustions took the Air Quality Index (AQI) levels to over 303. South Asia, in the last decade, has been facing the epidemic of air pollution as energy consumption levels rise across China, India and Russia. Adding fuel to the fire, rising population growth, higher urbanisation and heavy motorisation has resulted in more toxic air-generation across the skies. Trends indicate that air pollution is one of the rising causes of death in Asia and elsewhere globally. In a 2017 report by the World Health Organisation (WHO), it was reported that over 865,000 premature deaths occurred worldwide due to toxic air pollutants in the air. It appears there is a direct connection between rising air pollutants in the air and the percentage rise in respiratory ailments in urban centers.

The Pakistan Clear Air Programme report has further identified four key high risk factors that include solid waste burning in open spaces, industrial emissions in urban city centres, carbon-monoxide in vehicle smoke emissions and natural dust particles in the air we breathe every day. Yet no substantial measures to meet ambient air quality measures have been established by the federal or provincial health ministries, and this is perhaps the most alarming thing. The Minister of State for Climate Change, Zartaj Gul, dismissed the smog crisis by stating that it was a result of the wind carrying smog into Pakistan from India and thus those across the border were to blame. This viewpoint was endorsed by Fawad Chaudhry, and it seems that the government is more interested in downplaying this health hazard and blaming others for it rather than trying to remedy this problem.

The callous attitude of other nations too in this regard is highly disturbing. For instance, the United States announced its departure from the Paris Agreement and refused to meet pollution-reduction standards. As the world populations continues to rise, the right to life around the world is in jeopardy due to the in-action of governments and policy makers. We need stronger legislation to help cut down smoke emissions and industrial pollution. Unless there is a state led imitative with regards to this matter, Lahore will continue to be held hostage by smog every year in what seems to be becoming a routine. A highly recommended path to effective policy measures is to engage in higher taxation on polluting sources so as to curb harmful emissions. We need to redefine public safety standards, get stricter laws in place, create an emission control strategy and educate our people though a robust social media campaign. But none of these much needed changes can become a reality until the policymakers in Pakistan begin to treat this as a real problem which requires immediate attention.