Violence against women, no more 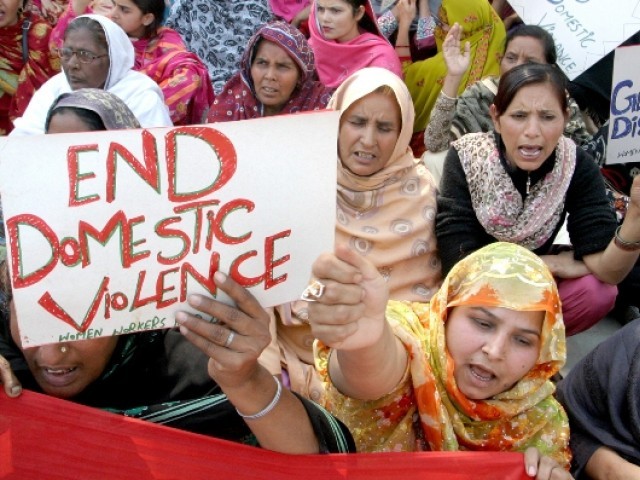 The Women's Rights Bill is an acknowledgement by the State that there should be legislative measures to protect women. PHOTO: Waseem Niaz

The Women’s Rights Bill unanimously passed by the Pakistani parliament is indeed a great achievement. For what it’s worth, it is an acknowledgement by the State that yes, indeed, there should be legislative measures to protect women.

Nighat Daad, a lawyer and the social activist behind Take Back the Tech initiative hopes that the proposed Prevention of Anti-Women Practices (Criminal Law Amendment) Act 2011, which now awaits passage in the Senate, doesn’t face the similar fate as the Domestic Violence Bill passed by National Assembly in 2009. Daad says:

“The Senate allowed it to lapse while saying that this law will enhance the divorce rate in the country. While the intent of the Bill is undoubtedly commendable, its execution leaves a lot to be desired. There is also the possibility of the misuse of the clause related to inheritance matters”.

There are still cases reported in US, UK and Europe where South Asian girls have been killed by their own families for wanting to be with someone of their own choice. Here in Pakistan, like most Asian cultures, domestic violence is not openly discussed. When I asked around in my own circle for personal stories of domestic violence, not one person came forward, even though I suspect that at least one of my friends is in an abusive marriage.

For too long, honour killings and domestic violence has been associated with the lower income groups. This myth was shattered by the tragic case of Samia Sarwar in 1999. Samia belonged to a well to-do family and her father was the President of the Peshawar Chamber of Commerce. Her act of walking out of an abusive marriage and seeking a divorce was so unacceptable to her family that she had to seek protection in a women’s shelter. This act of defiance sullied the ‘honor’ of her family and her own mother had her killed right in front of her eyes.

Violence can be silent

According to Dad, Domestic violence occurs in all ages, races, genders and social classes. The form of abuse differs- in lower class it ranges from physical abuse to mental torture and in upper class it may restrict to emotional abuse. While doing different awareness raising events, under the umbrella of Take Back The Tech( TBTT), Dad says she was surprised to see how women wanted to talk about every form of violence they face. She believes that there is a dire need to create more spaces for victims of abuse where they can find support and strength from other victims.

November 25 has been designated by the United Nations as the International Day for Elimination of Violence against Women. This day was specifically chosen to commemorate the lives of the Mirabal Sisters who stood against the repressive regime of General Trujillo of the Dominican Republic. The Mirabal sisters, known as ‘the Butterflies’ started a revolution against the General for which they were jailed, persecuted and eventually clubbed to death on November 25, 1960. The United Nations has chosen this day to raise awareness against all forms of violence directed at women.

But Nighat Daad remains hopeful of the future

“I now see many women speaking about the issues which once considered as taboos in our society. We literally need to create more spaces for victims, start initiatives like Take Back The Tech and more counselling for victims of abuse and more awareness raising events where public at large can participate both men and women”.

In India, the BellBajao campaign was successfully launched on TV and radio to create awareness and encourage action in stopping domestic violence. It may be difficult to quantify the impact of the TBTT and BellBajao initiatives, but they are much needed in the Subcontinent.

Last year, Robert Fisk, the internationally acclaimed journalist who followed up on Samia Sarwar’s case, wasn’t even able to locate her grave. This November 25, let’s make sure Samia Sarwar and the many other silent sufferings are not forgotten.

A personal branding consultant based in Karachi, who also contributes to The Express Tribune.

Airblue crash: The business of death and moving on