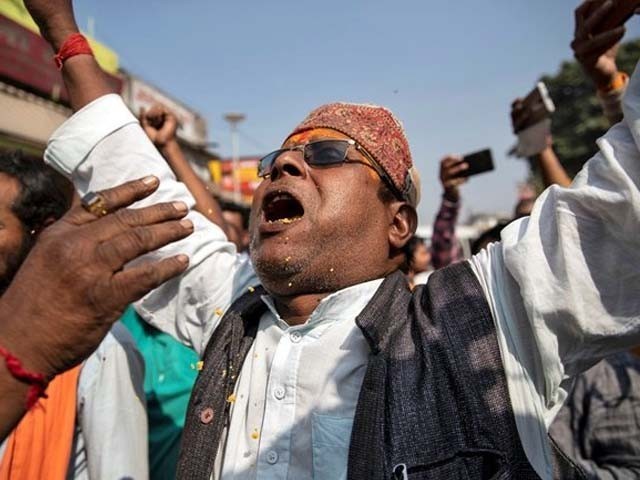 A Hindu devotee celebrates after the Supreme Court's verdict on a disputed religious site in Ayodhya, India. PHOTO: REUTERS

In an interview with Christiane Amanpour earlier in the week, Iltija Mufti, daughter of the former chief minister of occupied Kashmir Mehbooba Mufti, stated that India is “turning into a cesspool of bigotry, selective persecution, of hatred against minorities, and this is not the country I grew up in.” It appears that the Narendra Modi government has been doing its best to ensure that it continues to lend validity to these claims, however, in light of the Ayodhya verdict, it seems that the Indian Supreme Court has also joined the party.  Now, let me first preface this by saying that highlighting the great disservice the Ayodhya verdict does for minority rights in India is by no means an attempt to ignore or try to paper over Pakistan’s own abysmal record with regards to ensuring that the rights of religious minorities are safeguarded in the country. Criticising the decision of the Indian Supreme Court does not absolve Pakistan of its own sins when it comes to ensuring minority rights. Yet, the judgement does go to show how the veneer of Indian secularism is now rapidly slipping away.

In its verdict, the Indian Supreme Court chose to give a trust full ownership of the controversial plot of land in Ayodhya for the purposes of building a Hindu Temple. The Babri Mosque, which had stood at the site since the 16th century, was demolished in 1992, thus prompting decades of debate whether the plot of land should be given to the Hindus or Muslims. Many Hindus asserted that it was their right to have the land since the area upon which the Babri Mosque was built is believed to be the birthplace of the Hindu god Ram. Hence, the Indian Supreme Court has ruled that Hindus can now build a temple on the long disputed site while Muslims will be provided with an another piece of land upon which they can construct a mosque.

Anyone who even pays cursory attention to the domestic affairs of India would be aware of the fact that Muslims in the country are increasingly being persecuted and discriminated against in what seem like worryingly common incidents. But the sentiments which drive this prejudice are not confined to a particular group and are also echoed by many India politicians and state policies. The on-going turmoil in Indian-occupied Kashmir (IoK), the National Register of Citizens (NRC) in Assam (which is seen by many as a policy aimed at mostly making Muslims in the region stateless), and the fact that a Hindu right wing leader could get a Muslim headmaster suspended for encouraging the recitation of an Allama Iqbal poem in school, demonstrate just how quickly India is being taken over by a fundamentalist agenda rooted in religious discrimination.

Additionally, the desire of the Modi regime to clamp down on any form of dissent or criticism became evident just a few days ago when journalist Aatish Taseer had his Overseas Citizenship of India (OCI) revoked. The Bharatiya Janata Party (BJP) government is relying on draconian measures and extreme policies to ensure that its deeply concerning mandate continues to re-configure the very DNA of India, with any disagreement with state policies being shunned for being ‘unpatriotic.’

Therefore, in light of all this, the Ayodhya verdict, in essence, is a victory for all those who led the Mumbai riots in 1992 which resulted in the deaths of over 700 people. This verdict not only wipes the blood off of their hands but it also sends a resounding message to Muslims in India that even if you suffer at the hands of religious extremism, the highest court in the country will not come to your defence. If anything, this verdict could help the proponents of Hidutva fascism in India feel that their claims are now valid and have the backing of not just politicians but of the state machinery as well. What specific repercussions this will have for Muslims in the country will only become evident in the coming days, but it is likely that this judgement will only stoke the fires of religious bigotry in a nation which is moving away from its promised ideals of pluralism.

It also comes across as rather ironic that on the very day that Pakistan will inaugurate the Kartarpur corridor and welcome thousands of Sikhs from across the globe to visit the revered site, India has chosen to issue a verdict which only reinforces just how quickly the long touted notions of secularism in the country are now losing ground. Interestingly, Modi stated that the Ayodhya verdict “will further increase people’s faith in judicial processes” and it is important that the people of India work towards strengthening “the spirit of rashtra bhakti (devotion to the country).” These statements would be amusing if they weren’t so deeply worrying.

Modi and the BJP have long championed the cause which wanted a temple to be built at the Ayodhya site. Now, while the BJP is in power, that dream has taken a step towards becoming a reality. Hence, Modi was by no means a neutral party in this dispute and has always been skewed heavily in favour of one side. Now that the verdict has received his approval, one wonders what else Modi and his government will do in order to further entrench the growing religious fault-lines in the country. If India continues down the path it is currently traversing, this day could well be remembered as another dark day for Indian secularism.