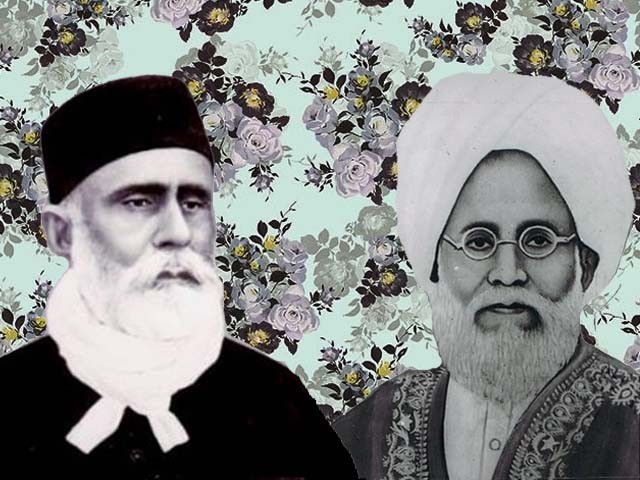 In Urdu literature, traditionally two concepts have remained dominant with regards to where creativity emanates from. The first is amad (spontaneity) and second is awrad (contrived). For a long time, the majority of Urdu writers, and the socio-cultural ethos in general, tilted more towards the amad theory, with Mirza Ghalib writing,

(The subjects (for my poetry) come to me from divine hidden sources,

There were several writers who grappled with these ideas in Urdu literature, however they were not formally conceptualised until Muhammad Hussain Azad, Altaf Hussain Hali and Shibli Nomani began to engage with these concepts. They were the ones who laid the foundation of modern literary criticism in Urdu literature. However, the very principles which underpinned poetic thought in Urdu are now under threat.

Today, unfortunately, a great deal of poetry in Pakistan contains imitation sans thought. This is against the Aristotelian concept of imitation wherein an artist internalises the process of imitation to conceive an idea within the mind and then creates a work of art by employing their imagination. There is no doubt that feelings and emotions play an important role in poetry, but they remain discordant and chaotic unless they are brought within a creative framework. Fredrich Nietzsche in his book The Birth of Tragedy stated that creativity manifests itself in two ways: Dionysian and Apollonian. Nietzsche was of the view that the tragic poetry of ancient Greece was born out of a rare cooperation between the Dionysian spirit of ecstatic intoxication, which imbues the work with vitality and passion, and the Apollonian spirit, which is the form-giving force that creates harmony. It is important to grasp this before one attempts to tackle the poetry of Allama Iqbal since since he tried to harness the Dionysian energy.

Dr Khalifa Abdul Hakeem in his book ‘Fikar-e-Iqbal’ seems to suggest that Iqbal’s poetry is inspired more by Dionysian zeal than his Apollonian spirit. Hakeem contextualises Nietzsche’s idea of Dionysian ecstatic intoxication in the Muslim context by endorsing Nomani’s favour of Arab poets who through their poems inspired warriors to fight fearlessly with typical Dionysian passion. Here we can clearly see a split in the thought and poetry of Iqbal. However, the purpose of this is not to degrade the quality of his work but to instead attempt to identify the locus where poetic thought diverges from rational thought. Both poetic and philosophical thought explains the same experiences through the same medium but with different teleologies.

Wisdom comes through a cultivation of unified sensibilities. In order to understand the quagmire Urdu writing in Pakistan is currently in, it is helpful to contrast our current predicament with the literary ideas which came to define Germany literature. The writings of Johann Wolfgang von Goethe, Friedrich Schiller, Friedrich Holderlin, Christian Friedrich Hebbel, Heinrich Wilhelm von Kliest, Gunter Grass and many more were steeped in philosophical concepts – a notion which Urdu poetry appears to be increasingly bereft of.

Poetry sans ideas provides only pleasure without ending in wisdom. However, Urdu poetry today is not the only victim of this poverty of ideas and is in fact emblematic of the general intellectual condition of the region. When we take stock of the pre-modern period of Urdu literature, we see darbars (courts) of kings and rulers filled with legions of poets competing with each other by playing with words and composing poetry without much thought. In the court of Bahadur Shah Zafar we find poets indulging in typical jealousies, and scheming to win his favour through poetry. But we cannot find many instance during these times where thinkers were debating over the ideas related to humanities, science, philosophy and other fields of knowledge. This problem has only become further exacerbated with time, hence resulting it the current predicament which Urdu poetry faces today.

When Azad and Hali started their project of literary modernism, they wanted to infuse new ideas into poetry by introducing fresh themes and reworking the modern literary canon. In a lecture in 1874, Azad urged writers to emancipate poetry from traditional enclosures and shackles, otherwise, he warned, “a day will arrive when your offspring will find their language without any trace of poetry.” Thereafter, Urdu witnessed some quality poetry that synthesised the breadth of thought, profundity of feelings, and the sublimity of imagination. During the mid twentieth century, Urdu poetry enriched the poetic oeuvre of Urdu literature by dwelling upon a growing disenchantment with the modern world. But now that wave resides on the peripheries, and the contemporary literary landscape of Urdu poetry is increasingly resembling a wasteland. Two factors have contributed to to this worrisome scenario – a shrinking imagination and an absence of philosophical thinking. When a poet ceases to absorb new streams of knowledge, this only serves to limit their imaginative horizons.

Abdul Rahman in his book ‘Ma’rrat ul Shair’ comments upon how both these factors have contributed towards the poverty of poetry. According to Rahman, only when a poet’s corpus of knowledge is vast will he be able to find an abundance of meaning and metaphors. He writes,

“Between thoughtful and vulgar poetry you will always find a wide spectrum of ideas in the former, and narrowness and paucity of ideas in the latter. The one which addresses wider ideas will repeat the same thought hundreds of times but always express them in a novel way with new meaning. On the other hand, the one which adheres to a narrow spectrum of ideas will fail to do so.”

Therefore, much of the poetry in Pakistan today is found to be lacking because the fountains of philosophy have almost dried up. Consequently, while our hearts are still saturated with emotions, our minds are becoming increasingly bereft of philosophic thought. Urdu poetry today needs a reconciliation between thought and feeling by creating a new romanticism in which both poetry and philosophy can once again begin to inform one another. This is imperative if we wish to recapture the glory of Urdu poetry.