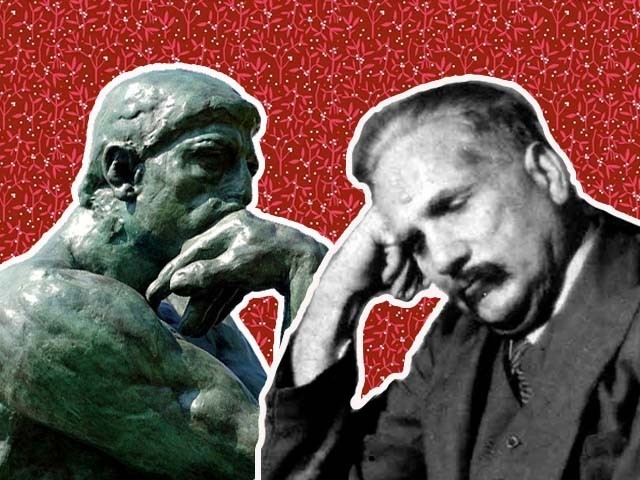 When a society faces an existential, intellectual or social crisis, it is the responsibility of the thinkers of the time to diagnose the ailments.

Normally, we think of knowledge as an activity which is shorn off from society in the libraries and laboratories of thinkers and scientists. On the contrary, production of knowledge is very much connected to the prevailing mindset and cultural ethos which directly influences our perception and reception of knowledge. It is this very mindset that has contributed to the poor state of human sciences in Pakistan – where these subjects have essentially been assigned a marginal status at the higher education level, as compared to natural sciences.

Instead of engaging with complex ideas, we reject them by stating that they are too theoretical and thus of little use. This aversion, and at times antipathy, is the result of a confluence of factors. When a social scientist explicates a complex social phenomena, they are often dubbed as theoretical person indulging in incomprehensible and arcane activity. But in fact, the very existence of theory rests upon its ability to explain a certain social phenomenon, which remain amorphous and chaotic. Such a phenomenon comes within the purview of understanding when it gets the light of theory. Without the conceptual understanding our practice is blind.

In the context of Pakistan, it becomes evident that the slogans of change in the current government are a blind practice which lack an understanding of the processes of history that have shaped the ideological and material realities of our country. Today we face a crisis of understanding in Pakistan not because of illiteracy, but because of those people who bestow upon themselves titles like ‘intellectual’ and ‘thinker’ without having made any epistemological and theoretical contributions to the social sciences and humanities. This failure of intellectuals stems from their habit of not shifting their mental gaze from the end product or symptoms to processes that beget products or symptoms. That is why we have not witnessed any conceptual breakthrough in any discipline of natural and human sciences, let alone a change in our material and existential conditions.

Owing to the contemplative nature and explanatory power of theory, it is mostly propounded by philosophers and theorists. Theorists and philosophers reflect upon entities, processes and trends to connect missing dots that at prima facie seem to be working in relative autonomy from other processes, but in reality they form a complex and cumulative interface. Only by connecting disparate parts together are social scientists able to construct a explanatory schema or conceptual framework which can be called a theory.

Concepts, definitions, propositions, ideas and hypothesis are essential components of any theory as they work as a grid to connect missing dots with a holistic scheme. There are many examples where a concept or idea opened new ways of explaining complex social facts and historical processes. For example, George Wilhelm Friedrich Hegel introduced the term dialectics to explain the operation of opposing forces of thesis, antithesis and synthesis on historical processes. There were ideas about class conflict and socialism before Karl Marx, but what made Marx a path breaking philosopher was that he took a long view of historical processes and provided us with concepts like dialectical materialism, class struggle, and its superstructure to help understand history and society.

Similarly, modernity brought about disenchantment in the traditional worldview and uprooted people spiritually, emotionally and spatially. Max Weber captured these altered states in modernity through his theoretical elaboration. In the natural sciences, Norwood Russell Hanson introduced the concept of theory-laden observation, which mean that what we deduce is informed by theory. His investigation into the nature of observation and its relation with theory. It helped us in understanding the areas that had remained unexplained because of  limitation of traditional accounts regarding the observation and causality. In human sciences, Michel Foucault used panopticon as a metaphor to show the disciplinary processes in societies to subjugate its citizens.

We as a nation have  a flare for using words without understanding their epistemological moorings. As if we did not already have enough analysts, commentators and anchor-persons, now we have new entrants in the domain of ideas in the shape of celebrities and influencers. Now people rely on their knowledge about religion, economy, war and morals. The reality is that none of these are theorists in any field of human sciences. As a result, we have more chatter and less debate grounded in knowledge. Instead of expanding our mental horizons and enhancing our understanding, this conflation only adds to our growing confusion. Neil Postman, in his book Technopoly: The Surrender of Culture to Technology claims that,

“When there is too much information to sustain any theory, information becomes essentially meaningless.”

The prevailing disarray in our society, failure to form our own opinions and a reliance on others to explain things to us are all signs of the conceptual confusion we suffer from. It is this confusion that has enabled populist leaders to take the reins of power in their hands. Such incidents have also happened in societies like the United States that are technologically and scientifically more advanced. It shows that sciences without a social vision to back them up are not enough.  Theory becomes irrelevant when it transforms into ideology. Unlike ideology that focuses on the products, theory examines the processes that yield a certain product in particular situation or space. Processes are always under flux. Ideology kills the dynamism of process by trying to confine our view within its confines. This is what happened to socialism in the Soviet Union, and the same is the case with the concept of Islamism today.

When a society faces an existential, intellectual or social crisis, it is the responsibility of the thinkers of the time to diagnose the ailments. Unfortunately, Pakistan is full of ‘writers,’ ‘analysts’ and ‘commentators’ who are good at describing products of processes but lack an understanding of social theory which can help us understand dynamics of our self, state and society. This is what encapsulates Pakistan’s current intellectual predicament.