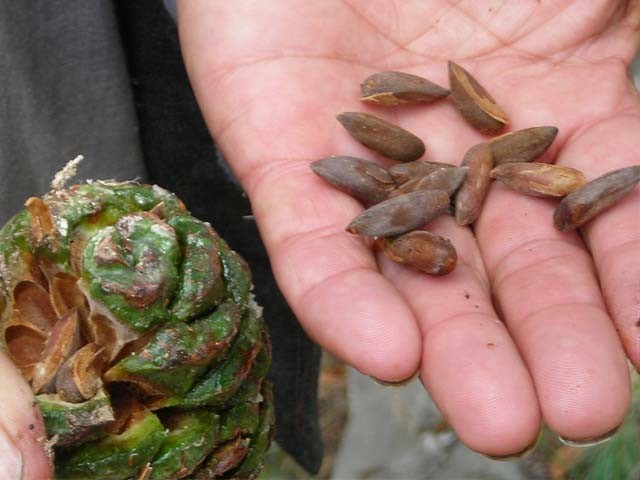 Chilghoza forests are very important for the local economy since the Chilghoza nuts can fetch good prices in the marketplace. PHOTO: RINA SAEED KHAN

Last month at a ceremony held in New York on the sidelines of the United Nations Climate Action Summit, a project from a remote part of Balochistan, the Kasa Ghar Community Based Organisation of the Sulaiman Range, won the Equator Prize for conserving Chilghoza forests. I was thrilled to hear about the global recognition (the project was one amongst 22 communities across the world which were selected for this prize) as I have actually visited these Chilghoza forests in the Shirani district of Balochistan. By creating a successful value-added market model for Chilghoza nuts, this community-based organisation has conserved around 9,000 hectares of vulnerable forests in the Sulaiman Range, which has led to the well-being of nine villages in the area.

I went to Zhob several years ago to visit the Chilghoza forests of the Sulaiman mountains, which are an extension of the Hindu Kush mountains into Balochistan. The steep mountainous terrain, the hot and dry summers and the cold winters combine to make for a unique ecosystem, home to endangered animals like the straight horned Markhor. The world’s largest pure stands of Chilghoza are also found here. These Chilghoza forests are very important for the local economy since the nuts can fetch good prices in the marketplace. The growing demand for Chilghoza nuts in cities like Dubai and Jeddah has meant even higher prices for the nuts. 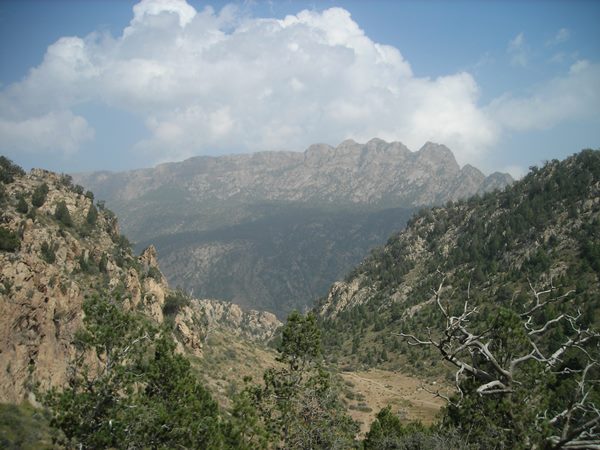 View of the Takht-e Sulaiman.

World Wide Fund (WWF) Pakistan initiated conservation work for these forests back in 1991, but faced reluctance from the forest-owning communities. However, WWF focused on controlling commercial logging and organised communities to conserve their forest resources. Thanks to their continuous efforts, over the last two and half decades the local communities are now taking care of their resources and are well organised.

“Though Chilghoza trees are of comparatively poor quality, they produce good quality nuts that have a good national and international market demand.”

When I visited the project area over a decade ago, the local communities were beginning to become aware of the fact that the value of nuts produced by a single Chilghoza tree is higher than the timber value of an entire tree.

“Before, they would extract the Chilghozas too early and damage the trees as well. Now we have taught them the best time for extraction, which is early September, and have given them special equipment to cut the cones,” explained a WWF official who was showing me around.

WWF-Pakistan’s project field office was located around an hours drive from Zhob town, deep in the Sulaiman mountains. We spent the night at the office, which was a cluster of mud and thatch rooms. The arid, stone mountains encircling the valley were forbidding and austere. They were also very difficult to climb, as we discovered the next day! We had wanted to see the Chilghoza forests, and in order to do that we had no choice but to climb the mountains. The Chilghoza trees are only found at higher elevations. Accompanying us was a local tribesman, Yar Mohammad, a member of the Shirani tribe, who looked striking in his grey turban, a Kalashnikov slung across his shoulder. Mohammad lived in a nearby village. He was to be my guide and saviour on my way up when the terrain became extremely hostile. 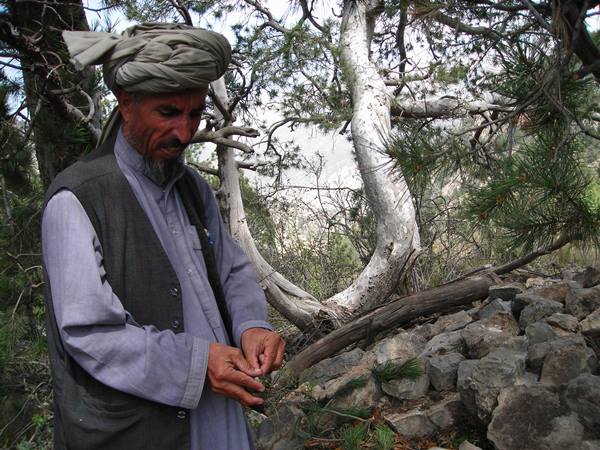 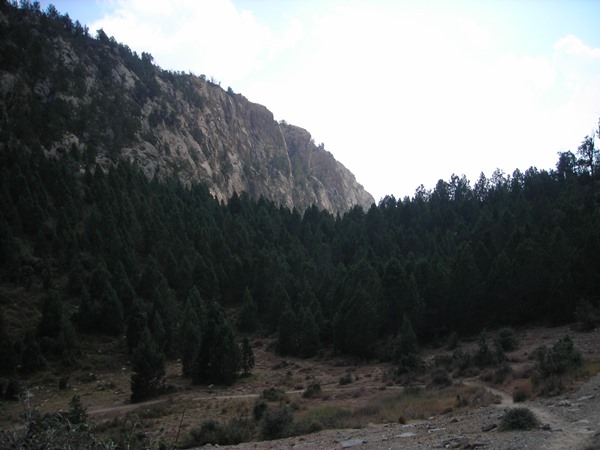 A blue pine forest atop the mountain.

We set off at five in the morning, with donkeys laden with food and knapsacks leading the way. After what seemed like hours trekking through a stony riverbed we finally started climbing. By now, the sun was blazing away, although it was mid-September. Luckily, the higher we climbed, the cooler it became and we had plenty of water in our canisters, filled by a fresh water spring on our way up. There is no water at the top of the mountain, so it is important to carry it with you.

As the track started getting narrower and steeper, we came across our first Chilghoza trees – they looked so delicate and spindly. Of course, this was new growth and we had yet to reach the dense forests above. We took a break for tea, by climbing upto a summer camp nearby. By now we were exhausted, but had yet to reach the top! Near the camp, hundreds of pine cones were littered by the makeshift shelter. We had just missed the harvesting, it seemed, for the local villagers had already extracted all the Chilghoza nuts and then buried them in safe hiding places.

“They will come for them in a week or so – they are letting them dry out a little”, explained Mohammed.

Our final push to the top of the mountain, called Pazi, was hampered by a landslide which had swept away the track. We had to now use both hands and feet to scramble up and Yar Mohammed lent me his unraveled turban to use as a makeshift rope. After around half an hour of hard climbing, we finally reached the top. There was plenty of new growth of Chilghoza trees which was an encouraging sight. The average Chilghoza tree lives up to around 100 years and gives fruit every year. Just across us on the other side of the valley was the famous Takht-e-Sulaiman. There is a shrine at the top which is said to be the tomb of the founder of the Pukhtun race. 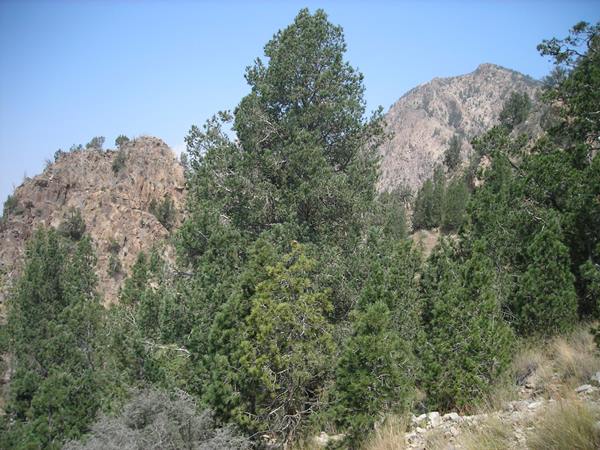 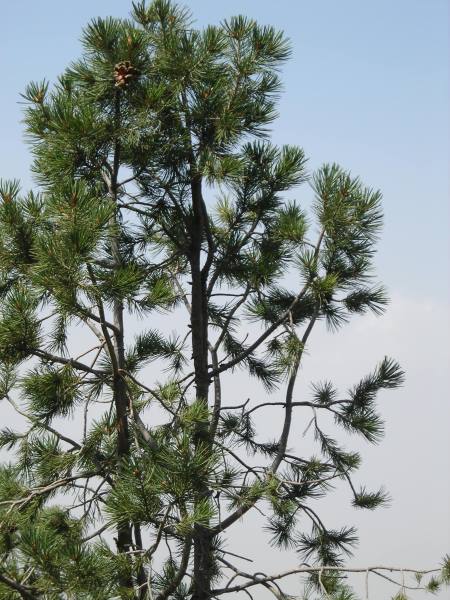 On the top of the mountain we had just climbed was a forest so thick that I could not even see the mountain’s slopes. In between the Chilghoza trees were Blue Pine trees. The Blue Pine is a beautiful tree, almost like a Christmas tree. We took lots of pictures and reluctantly turned away – it was time to head back down before dark. There are no villages or settlements on the mountain – when the sun sets, it gets very cold up there. The local villagers, who are tough mountain people, can easily trek up and down in a few hours. If need be, they spend a few nights during harvesting season, lighting a huge fire to keep warm at night.

It was very painful coming down in joggers and the stones were causing me to stumble along. By the time we reached the riverbed, it was dark already but luckily we had torches to light our way. From the distance we spotted the jeep that was waiting for us and by 8 pm we had finally made it back.

“This is a hard mountain,” Mohammed told us. “Not many visitors can go up and down in one day!”

Yet for the local people this is an everyday reality. They go up and down these mountains at least once a week to get fuel wood and timber. During harvesting season in early September, they go up almost every day. I came away from the mountain with renewed respect for these tough, dignified tribesmen. With the right guidance and encouragement I thought they had a bright future ahead of them.