Why do we exoticise the Kalasha yet continue to ignore their woes? 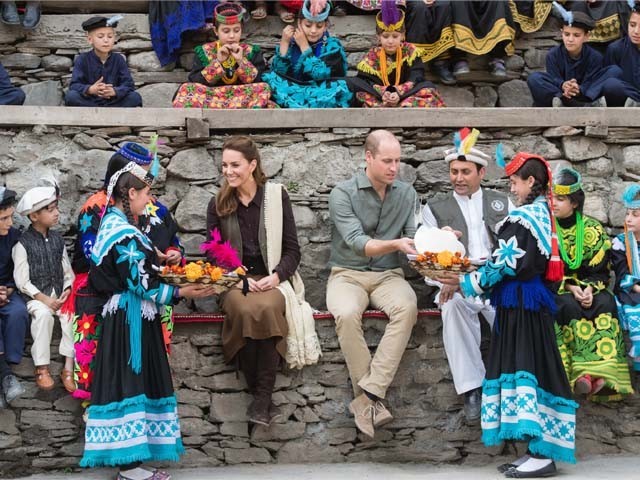 Prince William, Duke of Cambridge and Catherine, Duchess of Cambridge visit a settlement of the Kalash people. PHOTO: AFP

The mountainous communities of Pakistan who inhabit the valleys of Karakoram, Hindu Kush and Himalaya are on the margins, ignored and side-lined; dependent on external centres of power for knowledge that define and decide their identities, policies and power dynamics. The people of Pakistan largely don’t know much about these communities, their languages, cultures and history. This was glaringly evident during the media coverage coming out of the valley during the recent visit of the Duke and Duchess of Cambridge to one of the Kalasha valleys in the Kalashadesh in Chitral. Some reporters associated with certain famous media houses even thought that the more than ten ethnically diverse Chitrali communities were Pashtun. The Duchess of Cambridge receives gifts from a member of the Kalash tribe.

Even in the past, quite little was known about the Kalasha other than that they were ‘pagan,’ ‘wild,’ and wine drinkers. For many, the Kalasha, or their brothers towards the west in today’s Nuristan in Afghanistan, were seen as being almost barbaric. As a result, many myths regarding their beliefs and rituals were common, often depicting these ‘Kafirs’ as living in “a most barbarous state, eating bears and monkeys,” as cited in Alexander Burnes’ work, Travels into Bokhara. Additionally, the myth that the Kalasha are descendants of Alexander’s army still continues to be falsely peddled by both Pakistani and international media outlets despite the fact that a 2015 genetic study overturned this claim.

‘Kafiristan’ (Land of the Pagans) was a term applied by the surrounding Muslims in the south for the people of the mountainous communities of Hindu Kush, Karakoram and Himalaya from the Panjshir valley in Afghanistan across the northern areas of Pakistan to the borders of Kashmir who were largely still non-Muslim at the beginning of the 19th century. It is interesting that the so-called Kafirs of this Kafiristan succeeded in keeping their ancient beliefs and ‘primitive’ traditions alive until the end of 19th century even though they were surrounded by an expanding Islamic world.

But the situation drastically changed with the advance of Emir Abdul Rahman’s army to the valleys of today’s Nuristan in 1895, killing many and converting the rest. A considerable number of the ‘Kafirs’ in Afghanistan fled the wrath and took refuge with their brethren, the ‘Black Kafirs’— present day Kalasha — across the Durand Line in Chitral, in then British India.

The present day Kalasha live in three valleys in south-western Chitral in Pakistan. The Kalash valleys of Bumburet, Birir, and Rumbur are all narrow and at an altitude between 4,875 and 7,800 feet. Bumburet valley is the largest among them, 12 miles in length, whereas the other two valleys are somewhat shorter and narrower.

For researchers, the Kalasha provide living examples of customs somewhat similar to the now extinct cultural traditions of many communities from Hindu Kush, Karakoram and western Himalaya. These people living in three remote mountainous valleys in Pakistan are the last remnants of the ‘Kafirs’ of the Hindu Kush, who in 1896 numbered more than 100,000, but are now a small indigenous community surrounded by encroaching Muslims. Recent estimates put their numbers around 4,000, which indicates a drastic decline in the population of those Kalasha people who still practice their religion and traditions.

The Kalasha religion, like the population of the community, is in considerable flux today as it is faced with mounting challenges and increasing social pressures seeping in from the surrounding region. According to Peter Parke’s Livestock Symbolism and Pastoral Ideology Among the Kafirs of the Hindu Kush, this region, including the upper Dir and Swat valleys, “practiced archaic polytheistic religions which, though differing in many traits – such as the names of divinities, the morphology of religious festivals, the contents of the mythologies – had at their core a common symbolic system based on what has been termed a ‘pastoral ideology’.”

The one dimensional religious and intellectual upbringing of many in Pakistan makes the Kalasha appear to be very ‘strange creatures’ due to the rigid belief system which dictates the perceptions of many Pakistanis. Syed Gul Kalasha, who is an archaeologist working in the region, states,

“The disgusting questions asked by people about our religion worry us very much. Often I have to face these stupid questions at my office too. Yesterday some people visited my office and one of them told me strange anecdotes just to prove my religion false and baseless. He asked me peculiar questions, as if I was a lesser human being. He told some stories of monkeys with the implied meaning that we are no more than monkeys doing strange things in the name of ‘culture’ without any belief in God. This is done with me even though I am an archaeologist, so imagine what is going on with the ordinary Kalasha. When we question this mindset we are told that such people are few in number and constitute only 20% of the populous. Ironically, this incident took place during a seminar on cultural pluralism.”

Additionally, there is a myth among many Pakistani men regarding the promiscuity of Kalasha women, and every summer many men can be found in the valleys, staring at the women and in many cases harassing them as well. Even the traditional dances done by both men and women, which are part of the Kalasha festivities, are often regarded by outsiders as a sign that these women are licentious especially since dancing is generally frowned upon in Pakistan, especially for women. The Kalasha women wear their beautifully embroidered dress, the cew and piran, with the beautiful headdresses called shushut and kupas, the former is casual while the latter is worn on special occasions. Wine has a special status in their culture, hence many Pakistanis go there to consume the local liquor; and consequently perceive the area as a sensual paradise where anything is permitted. Apart from certain lecherous tourists, there are more subtle issues at work related to tourism as well. The influx of tourists has led to a large number of Kalasha women willing to pose for photographs and perform ceremonial dances in return for payment. This has created resentment within the community. The commercialisation of the Kalasha culture is another threat to the dignity and wealth of the people. From tourism the non-Kalash prosper economically because they own almost all the hotels and restaurants, and the Kalasha see very little of this revenue.

This exclusion of the Kalasha from the tourism industry creates many other issues for them as well. The influx of Muslim businessmen and travellers into the region has also meant that conversions of the Kalasha have become more commonplace. Continuous indoctrination from visiting proselytisers has put the valley at risk of undergoing an ethnographic change. Increased tourism has meant that more and more outsiders are eager to make the Kalasha more like them. Kalash girls sitting in Bumburet, the largest valley of Kalasha Desh in the Chitral District.

Acute poverty and economic wants also lure the Kalasha towards conversion. Many of them are in debt to outsiders, and whenever they cannot pay these debts they readily tend to convert as a form of compensation. Because of the growing poverty, many women are also encouraged to marry non-Kalasha men, who are usually wealthier than the Kalasha men. Furthermore, often the Kalasha are coerced into engaging in fraudulent transactions and are forced to sell their lands.

All these issues are not limited to the Kalasha only. In Pakistan, many groups, whether ethnic or religious minorities, have faced, and continue to face, such challenges. However, the primary difference is that we as a nation love to exoticise the Kalasha. Each government proudly showcases this community as evidence of Pakistan’s rich cultural diversity and as a symbol of just how committed the state is towards safeguarding the rights of minorities and preserving indigenous communities. This narrative is then echoed by the civil society, and the masses are convinced that since we readily put the Kalasha up on display for foreign visitors, we are also preserving and promoting their culture and religion. As noted above, the realities in the region are very different from the narrative which has been popularised.

Researchers and writers love the Kalasha as long as they provide them with an excellent field of anthropological research in the form of a human museum which continues to preserve its culture and traditions in a glass box for us to marvel at from time to time. The locals love them because the Kalasha have made the region famous,while tourists love to visit them for a bevy of other reasons. But the moment one speaks of the overarching social pressures, poverty, human rights violations, stigmatisation and the discrimination of the Kalasha, many of our researchers, linguists, and influential locals choose to look the other way. Unless this apathy towards the mounting issues faced by the Kalasha is rectified, we as a nation run the risk of endangering a community which we so happily display as a sign of our cultural pluralism.

The writer is a human rights and developmental activist of the Torwali community in Swat. He leads the local organisation Idara Baraye Taleem-o-Taraqi (IBT) and tweets @zubairtorwali (twitter.com/zubairtorwali)

The Maulana and the liberal predicament

Killed for enjoying music? What is the truth?

Swat Summer festival: A summer retreat, to the heaven on Earth