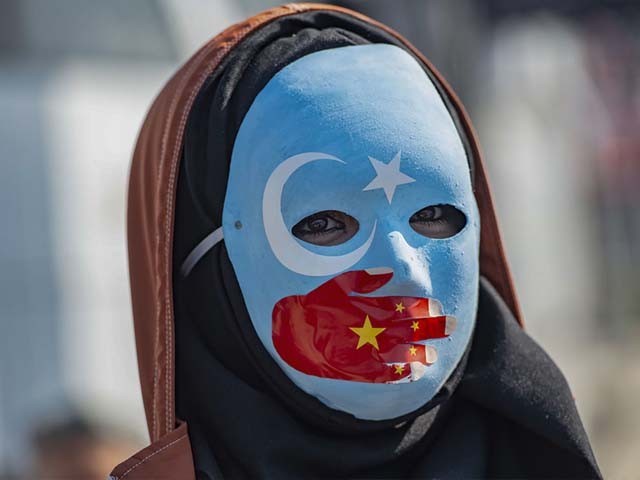 A demonstrator joins supporters of China's Muslim Uighur minority and during a anti-China protest. PHOTO: GETTY

Whether you’re a Pakistani citizen living in Pakistan or in the diaspora, you must be familiar with the ongoing tussle between India and Pakistan over Kashmir. Just a few weeks ago, India decided to revoke Article 370, taking away the special status of the disputed land and of the people living in Indian occupied Kashmir (IoK). After India’s actions in IoK, the Pakistan government and people decided to reach out to the international community for support, using various United Nations platforms to voice their concerns and holding local protests in order to bring attention to this issue. While, as a Pakistani, I empathise with victims of violence in IoK, I also empathise with those Muslim communities that are targets of violence in other countries.

Recently, the rampant discrimination against the Uighurs and other Muslims in China has started to garner the attention of the world media. Horrific accounts of prejudice, religious bigotry and an ongoing ethnic cleansing in the country has led to international outcry. Uighur women are facing systematic rape in the prison cells, being sterilised against will, being forced to rub chillis on their genitals, and have been made to have abortions without anesthesia. Moreover, human rights advocates from China have shared accounts of women being implanted with intrauterine devices against their will.

China has also created concentration camps called ‘re-education camps.’ These camps, which resemble the residential schools in Canada during its colonisation period of the local Aboriginal community, aim to curtail the reproduction of Uighur Muslims in the hope that the community will essentially be wiped out. Furthermore, the graveyards of Uighur Mulsims have also been destroyed in an attempt to eradicate any trace of this community. Additionally, Uighur scholars and activists have also fallen prey to what is being described as a “mass internment campaign.”

How is this persecution of the Uighur Muslims any less important and any less deserving of our attention than that of the Kashmiri Muslims? Why isn’t our prime minister concerned for these innocent lives as much as he is for the ones in Kashmir? Unlike the apathy and lack of initiative that the United Nations has shown towards Kashmir thus far, there has been significant information and evidence on the Uighur issue, which has been shared on a global level. In fact, in 2018, UN stated that they had credible evidence that around a million Uighurs and other Muslims have been locked away in detention centres.

The point that I’m trying to make here is that there needs to be more uniformity and transparency in our national policies. We cannot be selective about which oppressed group we choose to raise our voice for. The current stance of the government makes the state appear hypocritical since it only seems to concerned about one group of Muslims while turning a blind eye towards another community of Muslims.

Pakistan has immense stakes in Kashmir, both politically and economically, which is why the government is more likely to fight for the rights of the Kashmiri Muslims. Since China is a dear ally and economic crutch for Pakistan, the government and politicians are unwilling to hold China accountable for the systematic violence happening there. Economic interest has trumped moral righteousness.

As a citizen who cares immensely for her nation and for the people of this nation, my plea to everyone residing in Pakistan would be to really start questioning our state polices and our selective outrage. We need to be brave enough to raise concerns with the those in power wherever we see any loopholes and demand a better and sustainable life for ourselves and others, and this includes Muslims and minority groups, locally and abroad.