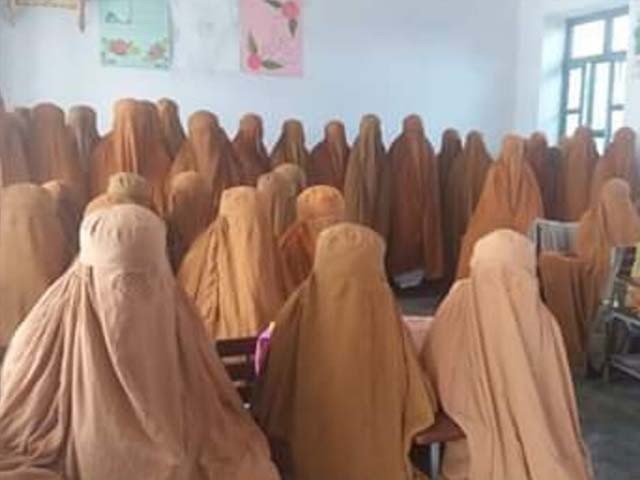 Ironically, all measures taken to prevent rape, or to safeguard the rights of women are focused on restricting their movement. PHOTO: TWITTER/ PALWASHA ABBAS

Women and their clothes made for viral news recently when the Haripur District Education Officer (DEO) issued a notification which stated that all schoolgirls must wear burqas since it will ‘protect’ them against harassment and rape. The move left Pakistanis divided, with some vehemently calling out the government, while others blatantly supporting it.

Those for the decision, argued that a covered up woman will inculcate ‘decency’ and, for the lack of a better word, ‘tame’ the raging hormones that supposedly, largely remain out of men’s control. An extension of this argument says confining women within the four walls of a house will also protect them from predatory males. Although the notification issued in Haripur was later revoked, the mindset which led to its implementation continues to persist. In Mardan, burqas were distributed amongst schoolgirls while students in elementary schools were advised to observe the purdah. Those against the notification turned up in hordes on Twitter, calling out the government for what many deemed to be hypocritical behaviour. Such incidents only highlight the age-old victim blaming mentality and perpetuate the notion that women’s clothes are what provoke men into raping or harassing them.

While the dust was still settling around the notification in Haripur, a horrific incident came to light, where six men entered a woman’s house in Karachi and gang-raped her within the confines of her own four walls, a place deemed safe for her by even the most conservative of corners. The men not only violated her but also filmed the ordeal on their mobile phones and threatened her with dire consequences if she she spoke up against the attack. Luckily, their tactics intended to shame her into silence did not work and the first information report she registered against the men led to all six of them being arrested, out of which two were identified as police officers. This horrific abuse of human rights, and gender based violence makes two things very clear. Firstly, the very men hired to protect us are part of the problem and, secondly, even the confines of a woman’s house cannot save her from rape.

This leads me to ask, will engulfing a female in many metres of cloth really safeguard her against the world, and what is one supposed to do when that very world comes crashing through her door? Then where is it that a woman is safe and how long will we deny that so-called ‘decent clothes’ and confinement within the famous ‘char dewari’ (four walls) cannot protect women from a man capable of tearing through both?

A hijab or burqa may cover a woman, but it does not automatically manifest basic decency in the onlooker’s eyes. Any woman who wears either of them will tell you that it does not magically provide protection from being leered at, being brushed against, or being harassed. Perhaps it is then wise to look towards the men perpetuating the problem. It is perhaps time to acknowledge that sexual frustration or someone’s clothes are not excuses which can be used to justify sexually abusive or violent behaviour. These excuses merely hide a problem which our patriarchal society just does not want to acknowledge; our men and the way they are raised.

Sexual aggression does not always stem from unbridled desire but is sometimes also a twisted expression of toxic patriarchy and male insecurity. When the argument becomes that men rape out of a biological compulsion, it not only trivialises the problem but also absolves men of all the responsibility, leaving room for just the victim to be blamed. It is about time that society stops portraying rape as a knee jerk reaction hardwired into the brain.

The Karachi gang-rape tragedy also forces one to take a good hard look at another victim blaming argument that is often brought up after such cases, ‘Why are sexual crimes not reported immediately after the incident, if at all?’ Like I said earlier, if the very police force hired to protect citizens is committing unspeakable crimes and also threatening victims with blackmail, who is to say that justice will be properly served? Even if the police are not directly involved, reporting sexual crimes is harrowing because harassment by members of law enforcement agencies is extremely common in Pakistan. Many cases go unreported due to the social stigma attached and the power of the agencies involved.

Ironically, all measures taken to prevent rape, or to safeguard the rights of women are focused on restricting their movement and penalising their freedom; be it in the form of handing out burqas or restricting them to corners of buses or confining women to their homes. None of the measures apply to the men. There is no talk of reforming them or teaching them to be better. And how can there be when society faults the cotton on one’s back instead of the brain between one’s ears.

For too long we have put the responsibility for sexual harassment and rape on women and the choices they make. As a society, we have to address the real source of these vices, which is the way these men are raised and the patriarchal misogynistic values which are imparted to them. Policing women and their choice of clothes while absolving men of all responsibility are not long-term sustainable solutions, and there is a dire need for things to change.