Capital punishment and the cracks in Pakistan’s judicial system 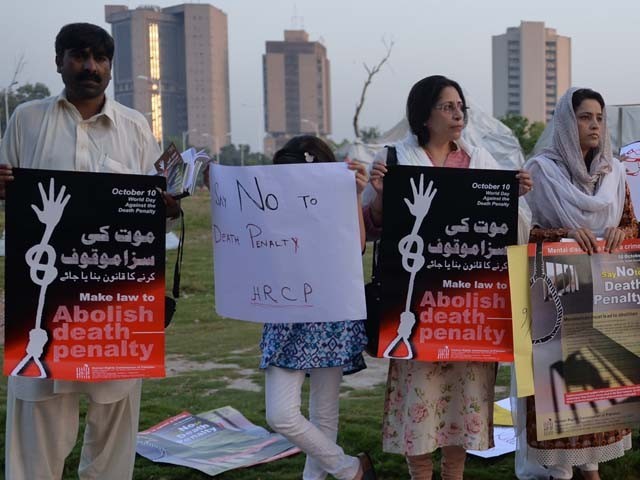 Pakistani NGO activists carry placards during a demonstration to mark the International Day Against the Death Penalty. PHOTO: GETTY

Up until very recently, Pakistan had the world’s largest population on death row. China has since taken over this dubious honour, but Pakistan remains second in line with the United States trailing closely behind. Right now, in Pakistan, a whopping 6000 people are awaiting execution. The question then becomes: Who are we hanging? And why?

If a recent article in The Economist is anything to go by, the answer is that Pakistan is hanging far too many innocent people. Of course, this injustice and incompetence are not exclusive to our country. For example, in the United States, where I currently live, the criminal justice system is notorious for failing to conduct fair trials and for disproportionately targeting racial and ethnic minorities.

Unlike a life sentence, the obvious problem with a death sentence is that it is irreversible. No financial compensation or formal apology issued after-the-fact can bring back the dead. After all, the family of the wrongfully convicted has not only lost their standing in society, they’ve most probably also lost their primary breadwinner.

This is why it’s so important to have plenty of legal and judicial safeguards in place, something which Pakistan currently lacks.

Indeed, it is common for trial courts to frequently rely on shoddy, circumstantial evidence. It is also common for judges to allow unreliable eyewitnesses to testify. For instance, trial courts will frequently hear cases in which the star witness or the eyewitnesses to an alleged crime are actually biased. This includes someone with a personal, vested interest in the outcome of the trial, or someone who has a personal problem with the accused.

Equally problematic is the way the Supreme Court of Pakistan treats mental illness despite the fact that the country’s Penal Code expressly forbids criminally punishing a person with diminished mental capacity. In a decision taken in 2016 during the Imdad Ali murder case, the Supreme Court held that schizophrenia was not a mental illness, thereby opening the door for mentally incompetent individuals to be sent to their deaths.

It is also not unheard of for executions to be carried out while the accused has a pending appeal. Consider the case of the Ghulam brothers. They were convicted of murder in 2002 and 14 years later, they were both acquitted by the Supreme Court. But when the time came to release them from jail, it was too late as both the brothers had been executed a year ago while their appeal was still pending.

Recently, Prime Minister Imran Khan called to expand the death penalty laws to include people convicted of child abuse. While I agree that a person convicted of such a crime should be treated as harshly as possible, I still think the death sentence is far too serious a punishment to be handed out without first making sure that stringent safeguards are in place to protect the rights of all parties involved, including the accused.

In other words, we should not be calling for or celebrating the expansion of Pakistan’s death penalty laws, when we haven’t even begun to tackle the issues of all the accused currently on death row, especially since many will not see a fair day in court, with a dedicated competent lawyer, and will never appear before an unbiased jury or judge.

Naturally, the question then arises: if not capital punishment, then what is the alternative? Ironically, Pakistan’s Supreme Court has essentially answered this question for us. According to the Supreme Court, the death penalty should be a last-resort punishment reserved for the most horrendous crimes, most crimes that result in serious injury or death. Instead, the Supreme Court recommends lengthier sentences, like a life sentence with or without the possibility of parole.

But, as so frequently happens, lower courts haven’t been very consistent in actually following the Supreme Court’s precedent. As a result, we continue to see the death penalty being awarded for ‘low-level’ crimes like drug offensives. To me, this is nothing short of a massive miscarriage of justice.

Ultimately, the question boils down to what we mean when we say justice must be served. And, in order to answer this question, we have to first accept that justice looks and means something different to all of us.

Take my own household as an example; I am strictly against capital punishment. Whereas my husband thinks capital punishment is the proper punishment for crimes like murder or rape. Similar differences exist between my lawyer colleagues and me. While I believe that a death sentence is the ultimate denial of human rights, I know plenty of like-minded, social justice-oriented lawyers who think capital punishment is a good way to deter future crime.

In other words, we can agree to disagree on what justice looks like, but that shouldn’t mean that we stop seeking and demanding justice. Nor does this mean that our pursuit for proper justice should be limited to serving the interests of the lucky few with deep pockets, well-connected families and fancy lawyers. Indeed, our pursuit of proper justice should be extended to anyone who comes into contact with the criminal justice system. Because the loss of even one innocent life is one too many.