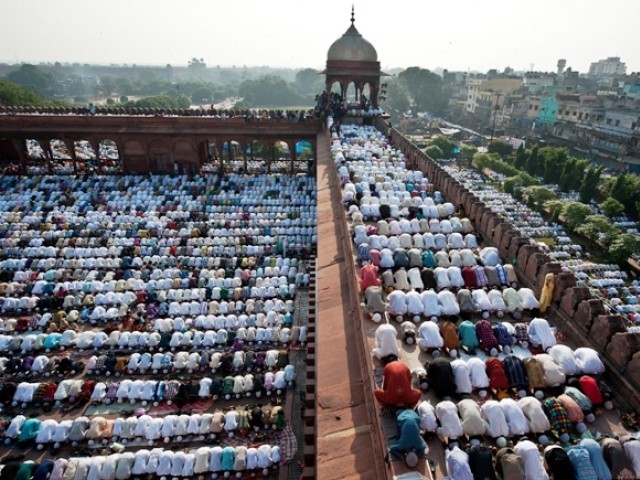 It’s customary for Eid greetings now to be accompanied by questions like what the day was like and how well the prayers went. Eidul Azha prompts an additional question about the sacrifice and remarks about prices that fall in the category of a general unhappiness with the times.

Predictably, I get lots of telephone calls of this nature from Lahore and Islamabad. But because I also have friends in Delhi, Lucknow and Aligarh, there were some exchanges of the sort with them as well. But a friend in Delhi, whom I happened to ask whether or not he had said the Eid prayers, stunned me with his answer. He said while he was not very regular with daily prayers, he always joined the Eid congregations. Then he added:

“Although we live amongst infidels, we don’t require security guards to say the prayers. To Allah belongs the praise.”

This left me red in the face for I had just returned from the mosque after saying the prayers. There was a police picket alright and once I passed it there were security volunteers assigned by the mosque management who eyed me suspiciously. One of them felt my dress from the neck down and only when he was sure that I was hiding no weapons did he let me through.

I also remembered being grateful on my return home for the prayers having passed without some explosive going off or a suicide attack. But there being no newspapers there was no telling even the next day how safe the Eid congregations in the rest of Pakistan had been. I remembered the days when I would turn on the TV for news.

What caused me to stop? I think it was the trend among news channels to spice up their reports. Only recently I was watching a popular channel as it reported on sentences passed on cricketers convicted of corruption. The lady reading the news was quite aggressively saying things like people getting their just deserts. It sounded like double jeopardy: the cricketers had been sentenced by the court and now the lady was sentencing them. I suffered for a while hoping she would stop but when she wouldn’t I first changed the channel and then switched the TV off fearing that other channels may be doing the same thing.

I remember learning early on entering journalism that the reporters must treat a report like a report. Comment might follow in an editorial, a column or a news analysis but the reporter or the news editor had no right to burden the report. The TV channels today seem to be unable to resist the temptation. I have decided therefore to rely on newspapers for the news.

But I digress. I was talking about the effect a friend’s remarks about Eid congregations had on me. The thing is every time some Indian Muslim friend says something out of sympathy I tend to smell a taunt. This reminds me of Qurratul Ain Hyder, who used to be particularly sensitive to Pakistanis pitying or patronising their Indian Muslim brothers and sisters. How times have changed. The conditions in Pakistan today prompt visitors from India to say things, or say them in a way, that sounds like they are pitying us. The irony is that while Indian Muslims suffered the situation at the hands of their communalist compatriots, their Pakistani are suffering at the hands of none other than our own coreligionists.