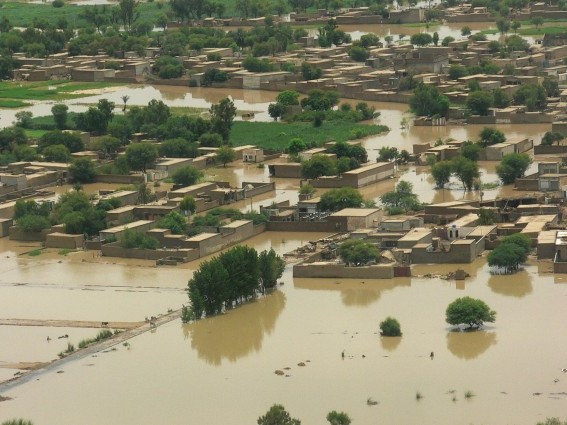 An aerial view showing houses in submerged due to the floods. PHOTO: AFP

According to the government, around 800 people have died in floods that have struck Khyber Pakhtunkhwa. Around 270,000 people have been affected by floods in Balochistan, more than 15,000 houses have been destroyed and 25,000 families in Naseerabad are homeless. While we sit in the comfort of our homes up to 300,000 people remain without food and shelter, struggling to get to higher ground with what little is left of their belongings.

I can only wonder what we are to do for our brothers and sisters who no longer have homes to go back to, who are without food and now struggle for their very lives.

Fawad Ali Shah, a reporter at The Express Tribune spoke to a recent graduate of Peshawar University Ghaffar who told him that he was in the mountains with his family. There was no food, their homes were gone and the children had started to weaken and suffer because of the unavailability of food and water.

Balochistan has always suffered the most when floods hit, yet we always manage to forget about the province a few days after the crisis by supplying them with food items. Homes are washed away, families are lost, people go hungry and all we can do is sit and debate about what the government is not doing.

We cannot even imagine for a second what these people are going through but we can try to make things easier for them. Instead of making appeals and debating the number of casualties we can donate and collect supplies and food for flood victims.

Can we please stop commenting about how bad things are and how we should all pray? Can we go out and actually do something to help?

Unlike the Airblue crash (which was tragic, don’t get me wrong) we can still help control this disaster and hopefully, save lives.

A number of politicians have taken the initiative to visit flood victims and spend time with them which I appreciate but it would have been better if instead the politicians had taken victims supplies.

The army is also doing its best to evacuate people, but we still need more and that is where you and I can play our part.

I want to end by requesting President Asif Zardari to cancel his trip to the United Kingdom, not because of PM David Cameron’s comments. Rather so that those funds can be used to help flood victims. I’m sure the nation would appreciate it more if for once we don’t spend millions of taxpayer cash on lavish hotels and rental cars.

I’m sure there are many of us who would like to help in some way or the other. Let’s do something about it (for a change)!

You can donate Rs10 to help affectees by texting ‘D’ to 2471. To learn more about how to help visit D for Donate.

A sub-editor on the web desk of The Express Tribune.

More provinces - or not?

Naval base attack: When will we learn?