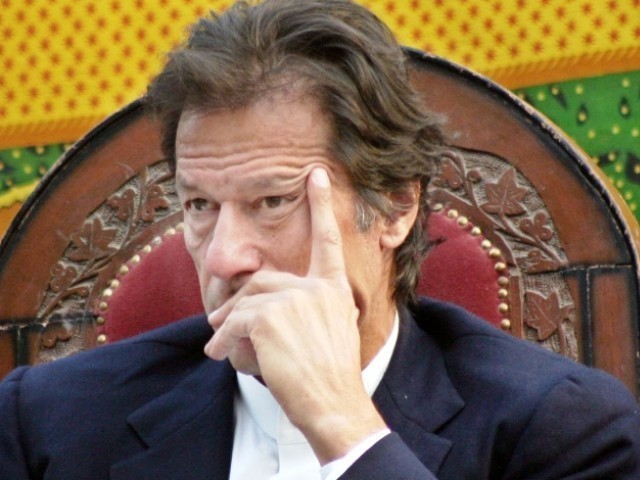 Imran Khan needs to be a leader who is realistic as opposed to one who makes grandiose statements. PHOTO: NN1/ FILE

To say that Imran Khan elicits mixed emotions from me is like asking me whether I like chocolate; it’s complicated. On October 30 after seeing the swarms of people collect around the Minar-e-Pakistan, I was hoping that Imran Khan would come on a white horse and sweep me off my feet; I wanted to follow him. But alas I found the content of his speech to be lacking.

Despite the fact that he was able to mobilize such a large number of people, I was not ready to put the Daniyal Noorani seal of approval on him (clearly all politicians are dying for that these days). I, thus, started to ruminate as to why this was so.

My analysis indicated that the pros greatly outweighed the cons and that he was by far the only leader I would support. Yet, why wasn’t I willing to be like the rapid insafians (PTI supporter) who put MQM supporters to shame with their aggressive defense of Imran Khan?

Clearly I have double standards.

I realised that I hold Imran Khan to a much higher standard compared to other leaders. Being able to relate to him more than any other leader, I see him as a reflection of myself and take it personally when his views don’t perfectly mirror mine.

Even though I am aware of my double standards, I am still not enthusiastic about the idea of supporting Imran Khan. Maybe like an unmarried person in his/her mid-thirties, I should just settle for good enough. However, like any unmarried person in their mid-thirties I won’t settle. I don’t want Imran khan to just be a good leader; I want him to be a great leader.

It may seem arrogant for a person who has under 300 Twitter followers to say that he is going to help a leader, who attracted more than 100,000 people to a rally, to become a better leader. But if there is one person who can appreciate arrogance, it is Imran Khan.

I want Imran Khan to rise above the politics of negativity and be the leader of a positive Pakistan. While his standup comedy is second to none and I enjoy a good machar/magarmach (mosquito/crocodile) joke as much as the next guy, Khan needs to disassociate from all of this and paint a vision of a positive Pakistan that people can believe in. He needs to forget the empty rhetoric and set small tangible goals. Saying that Pakistan will resolve all of it’s energy problems because it has a lot of resources, is like saying a fat person will get into shape because he lives close to a great gym. Only a Zaid Hamid fan can believe there is a quick fix to Pakistan’s energy crisis. Imran Khan needs to be a leader who is realistic as opposed to one who makes grandiose statements.

Given Imran Khan’s track record, it is hard to see any other current leader in Pakistan who has done more for the country. In his speech he made some great points regarding women’s development, rights of Balochi people and minorities, but he ignored the elephant in the room wearing a suicide jacket.

To those people who were sceptics, but are ready to jump on to Imran Khan bandwagon, I would say be patient and continue to push him to voice his opinion on certain issues. It is our responsibility to help him reach his potential. Till Imran Khan adequately formulates a coherent policy on issues that are important to me, my response to the slogan “Yes, he Khan!” will be “Yes he Khan, but he may not…”

Correction: The Urdu word ‘magarmach’ was mistranslated as ‘turtle’. It means crocodile.