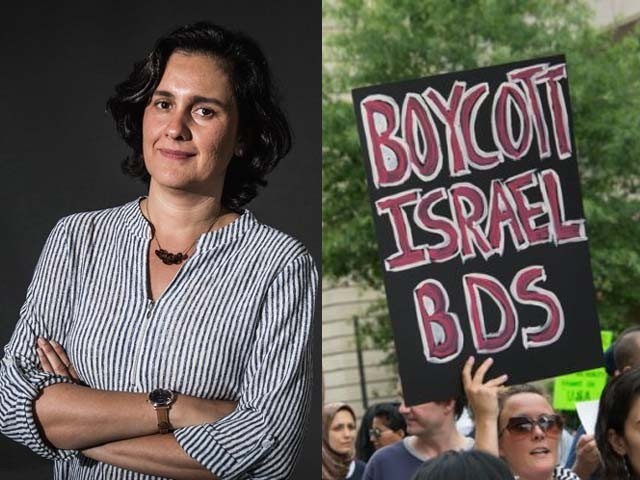 Because of the Holocaust, Germany still feels it bears a special responsibility towards Jews and also Israel.

Last week, in a bizarre turn of events, the British-Pakistani author Kamila Shamsie was informed that she would no longer receive the Nelly Sachs Prize on account of the fact that Shamsie supports the Boycott, Divestment and Sanctions against Israel (BDS) movement. The withdrawal of the prize, which has been welcomed by some and was initially conferred upon Shamsie by the German city of Dortmund, speaks more about the lingering fault-lines which remain entrenched in Germany than it does about Shamsie’s personal politics.

But before one dives into this particular incident and how it is representative of a wider dilemma Germany must contend with, it is important to understand what exactly the BDS movement is and why Germany is afraid to even recognise someone who associates themselves with it. Founded in 2005, the BDS movement is a transnational campaign that promotes various forms of boycotts of Israel in order to create international pressure in an attempt to get the nation to stop its human rights abuses against the people of Palestine. Many supporters continue to see the BDS movement as the only way to build effective pressure on Israel. The movement argues that the Israeli state must withdraw its forces from occupied territories, eliminate the partition wall in the West Bank, ensure full equality between Israeli and Palestinian citizens, and promote the right of Palestinian refugees to get their occupied homes and property back.

Now, as a German, when I heard about the reason given by the jury for choosing to no longer honour Shamsie, I was not particularly surprised. This is because supporters of the BDS movement in Germany are already viewed with a great deal of suspicion. The situation has worsened since May, 2019, when the German parliament, through a very large majority, passed a resolution titled ‘Stand Resolutely Against the BDS Movement: Combat Antisemitism.’ The non-binding resolution equates the BDS movement to anti-Semitism, and states that it is a strategic threat to Israel. Therefore, as per this resolution, any individual who supports the BDS movement in Germany is automatically labelled as someone who is against all Jews. The BDS has also been accused of using “patterns and methods” used by the Nazi movement during the Holocaust.

Shabby behaviour to strip ⁦@kamilashamsie⁩ of German literary prize over her brave and principled support for BDS. Stay strong 💪 Kamila, we r all proud of u. Didn’t become one of the gallery-players to ignore injustice https://t.co/6Spsj8yUb8

This is absolutely disgraceful. Shame on the city of Dortmund. Kamila Shamsie is a brilliant author and one of the most principled and thoughtful people I know. This reflects terribly on Dortmund and the Nelly Sachs Prize. https://t.co/roiX2sN50b

In order to grasp Germany’s troubling blind support of Israel, it is imperative to ground it in a historical context. As a result of the Holocaust carried out by Adolf Hitler’s Nazi regime against European Jews, Germany still feels that it bears a special responsibility towards Jews, and also towards the State of Israel. I understand that as Germans, it is our responsibility to ensure that this darkest chapter of German history is never repeated. This is all the more necessary during times like this, when right-wing populist parties such as the Alternative for Germany (AFD) party, and right-wing organisations like PEGIDA are gaining some deeply worrying momentum in Germany. However, contrary to the prevailing German guilt complex, I do not feel any personal guilt about the Holocaust because I was not alive during that time. What happened was undeniably horrific, but to saddle future German generations with the sins of the Nazi regime is a fruitless exercise. Therefore, unlike some in Germany, I do not feel that I am ‘indebted’ to support the State of Israel.

Ever since I was a teenager, I noticed that any criticism of Israeli politics is generally condemned in German society. At the time, I did not quite understand why one could not to criticise Israeli policies like those of any other state. The first time I became truly aware of why such criticism is frowned upon was when I attended a lecture by the Israeli sociologist Moshe Zuckermann at my university. As a result of Zuckermann’s lecture, I understood how a crime against a religious group has now be instrumentalised to prevent any criticism of Israel altogether. But many other nations in the West also turn a blind eye towards Israel’s human rights abuses; abuses which, if they were committed by any other state, would invite universal condemnation.

I do however feel that at this point it is necessary on my part to elucidate that I do not unconditionally endorse all the organisations and movements currently fighting for the Palestinians cause. Rather, it is important for me to support the progressive, social and political forces interested in ensuring a peaceful resolution to this conflict.

If you win a prize, named for a Jewish laureate, which specifically promotes "tolerance & reconciliation" – & then the jury finds out that you boycott the world's only Jewish state (& no other), they have every right to withdraw the prize. Good on them.https://t.co/NuldCoqw6d

Kamila Shamsie's statement in response to the rescinding of the #NellySachsPreis on basis of her support for #BDS movement for Palestinian rights#McCarthyism pic.twitter.com/2sm6W3xI6Y

The fundamental problem which Germany now has to contend with when it comes to the BDS movement is that it is ridiculous to suggest that criticism levied against Israel represents criticism levied against the entire Jewish population of the world. Germany has to understand that Israel and its activities do not represent all Jews. Criticism by Shamsie, or any other individual, which is aimed at Israel does not equate to anti-Semitism. It is precisely this politically motivated distortion of the concept of anti-Semitism that the German parliament has made more socially acceptable with its resolution. Sadly, I have observed that this reductive ideology is also followed by individuals and political forces who sincerely want to do something to combat the prevalence of anti-Semitism, but fail to realise that fighting existing concept – which, of course, must be resolutely combated – is not the same as unconditionally supporting Israel.

In light of all this, Shamsie being denied the prize may not come as a particular shock. But it does call in to question the reputability of the prize and the jury. If her support of the BDS movement was such a point of contention, why did they choose to give her the award in the first place? Did the jury perhaps know about it initially and not consider it relevant at the time? Was there perhaps political pressure on the jury to revoke the prize? The only ray of light to emerge from this entire situation was Shamsie’s response to the revocation of the prize. She has stood by her decision to support the BDS movement, and it is a stance I wholeheartedly welcome.

Not only this, many prominent personalities from across the globe, such as Arundhati Roy, Noam Chomsky and William Dalrymple, also spoke up in support of Shamsie and decried the withdrawal of the prize on such grounds. One hopes that such widespread support for Shamsie forces Germany to reassess its blind loyalty towards Israel. However, as the recent past has shown, this appeal will probably fall on deaf ears in Germany.

The writer is a masters student of Political Science at the University of Marburg in Germany and is part of the editorial board of the political quarterly magazine ‘Z. Zeitschrift Marxistische Erneuerung’. He wrote his bachelor thesis about the social and class structure of Pakistan. He tweets @PatrickOelkrug (twitter.com/patrickoelkrug)

As a German, I am offended by Imran Khan’s comparison of Modi to Hitler