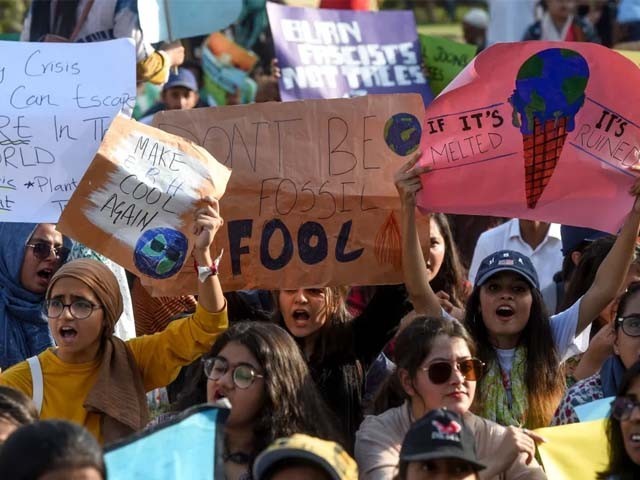 Youths hold placards as they march for a climate strike to protest against governmental inaction towards climate change. PHOTO: AFP

Before September 20th, the last time I marched for the climate was a decade ago outside the venue of the Copenhagen Climate Summit in 2009. It was a cold, dark day and there had been skirmishes with the Danish police. It was a depressing march and as protestors huddled around bonfires made of banners, I thought it a fitting end to a summit that had failed to deliver a climate deal.

The world had not come together to cut carbon emissions as we had all hoped. In fact, key governments bought themselves a few more years until the Paris Agreement. The global momentum that had been building up before Copenhagen fizzled out. As I sent my last report from Copenhagen, one climate activist told me,

“It will take a few years for the movement to build up again after this dismal failure.”

My report of the event was published on the last page of a newspaper in Pakistan because, as my editor told me,

“There are more important things happening in the country.”

Last Friday I marched for the climate once again, this time in Islamabad, at the climate march led by ClimateActionPK and championed by a loose coalition of environmental lawyers, journalists, academics, climate experts, student leaders and non-governmental organisation (NGO) activists across the country. The next day, a large photograph from one of the marches appeared on the front page of that very newspaper. It was then that I realised that the time has finally come; climate change has made it to the front pages in Pakistan!

The call for the desperate need to curb climate change has gained global momentum and is so powerful that even a relatively low carbon emitting country like Pakistan has heard the call. One can certainly credit the Swedish schoolgirl Greta Thurnberg for amplifying this movement by inspiring young people all over the world by becoming the face of the movement.

Last Friday, on what was called Global Strike Day by Thurnberg, it is estimated that over four million people across the planet took to the streets to make their governments act on climate change. In Pakistan, marches were held in 34 cities, and these marches varied in size from a couple of hundred people, to over 2,000 each in bigger cities like Lahore, Karachi and Islamabad. Weeks before the climate marches, groups of activists held coordination and outreach meetings and helped raise funds amongst themselves.

Whatsapp groups were created in various cities as the idea grew and the word spread. Volunteers began growing in number and students of local schools and universities were mobilised because this was to be a movement by the youth for the youth. In Islamabad, an unofficial organising committee sprang up – no one was told what to do, everyone just chipped in. I’m sure it was the same for the other cities. The movement had been years in the making, it just needed a catalyst to bring concerned citizens together.

Huge crowds at the Islamabad #ClimateMarch. There is suddenly a climate movement in Pakistan. #ClimateActionNow pic.twitter.com/jp9jHusiAL 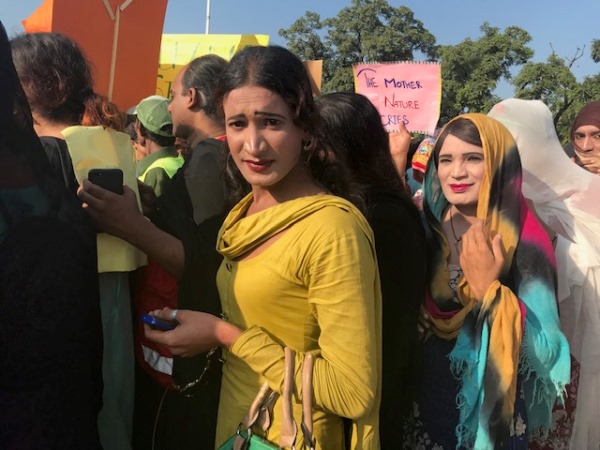 In Islamabad, we partnered with the youth led Fridays for Future group, which is a part of the dynamic global student movement led by Thunberg. Fridays for Future recently received the 2019 Champions of the Earth award, the UN’s highest environmental honour. The head of Fridays for Future chapter in Pakistan, 26-year-old Iqbal Badruddin, has been mobilising students in over a dozen universities, leading the weekly Friday demonstrations and spreading awareness about climate change. He got us the much needed No Objection Certificate (NOC) for the march. He told me,

“I was expecting hundreds…but thousands came to the march and I’m so excited at the response. Now we have to reach out to rural areas and make our movement bigger.”

The marches in all these cities attracted young and old, the privileged and the marginalised alike. In Islamabad, the inhabitants of many kachi abadis  were also mobilised and came to support the movement, which is imperative because it is the poor who currently bear the brunt of climate change. It was heartening to see men, women, transgenders, and school children from all walks of life walk together in solidarity. Advisor to the Prime Minister on Climate Change Malik Amin Aslam was also invited onto the stage and gave a short speech about how Pakistan was emitting less than 1% of total greenhouse gases globally, but was still facing the adverse impacts of climate change. 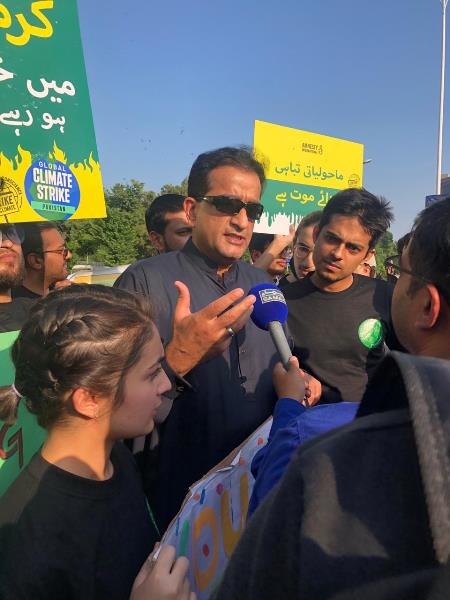 He promised that Pakistan would lead the climate emergency in this region and later accepted the countrywide demands that had been drafted by ClimateActionPK, terming them as “doable.” Minister of State for Climate Change Zartaj Gul also walked with the participants from the Press Club to D-Chowk and promised to take up the demands with her government. The organisers of the march made it clear, however, that this was an apolitical citizens movement and that the objectives were to put pressure on the government to ramp up action on climate change.

Beautiful scenes from #ClimateMarch in Lahore. Similar scenes across the country.

Similarly, in Lahore, protestors marched from outside the Press Club in Shimla Pahari to the Al Hamra Arts Centre in the hot, humid weather. One of the main organisers, Ahmad Rafay Alam, described it as,

“A success in execution and also in preparation… I’m enthused there is a whole new generation of young activists in Lahore who will be future leaders.”

Seventeen-year-old Ayla Alam, who marched on the roads of Lahore for the first time in her young life, alongside her friends, said,

“It was honestly a proud moment seeing so many like-minded people come together, regardless of their backgrounds, and protest for something they all believed so greatly in. Walking through the streets of Lahore with the group made me feel extremely powerful, and somehow change felt a little closer.” In Karachi, the organisers incorporated music, dance and songs at the march, and many recognisable faces like Shaniera Akram also joined the gathering in the garden outside Frere Hall. According to veteran climate activist and one of the main organisers of the march, Afia Salam,

“The Karachi march was representative of the cosmopolitan and egalitarian nature of the city… for so many diverse groups of people to have come out on the afternoon of a working day, especially school students, clearly showed a growing awareness of the climate crisis.” Environmental journalist Zofeen Ibrahim said that it felt good to march, but she wished more youngsters had come. Ultimately, these climate marches are about the wellbeing of the youth of this country. And this was simply a brief glimpse at the marches held in Lahore, Islamabad and Karachi. All the marches held in other cities like Mardan, Chitral and Jhang, to name a few, are just as important and just as crucial. Pakistan might not have greatly contributed to climate change globally, but it needs to do much more to protect its citizens – and the youngsters need to take over this movement. After all they are the ones who will inherit a very different and dangerous world if temperatures continue to rise.