Sadly, when it comes to sexual abuse, predators don’t discriminate 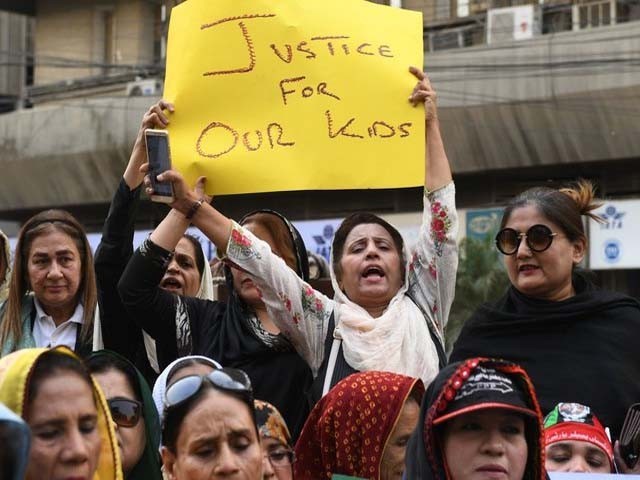 Pakistani civil society activists take part in a protest after a child was raped and murdered.PHOTO:AFP.

Earlier this month, I wrote about a case of rape against a minor in Kasur and at the end, I wrote with quite some conviction that I would be writing about a similar incident very soon. And, here I am doing just that.

Last week, bodies of three minors were recovered by the police who seemed to have been murdered after being raped, in Chunian, Kasur. However, this time, the bodies discovered were not of girls, but of boys.

On the Kasur incident: There will be accountability for all. Those who do not perform in the interest of the common man will be taken to task. Following actions have so far been taken by the Punjab police & the provincial govt:

Many people bash feminism because of various different reasons, one most significantly being that the feminist movement only caters to women centric problems. Here, I would like to point out just how flawed that misconception is because THIS is a feminist issue. The causality and convenience with which such crimes take place and are hardly ever accounted for is a feminist issue. Whether its boys, girls, women, men who are raped and murdered-  all these are feminist issues. It’s about throwing shade and resisting a culture that allows people to think their privilege can aid them in getting away with doing certain things.

For generations, we have continued to let a patriarchal mindset rule our “culture”, the way we run our society, politics, and to a large extent, even the way we perceive Islamic values. Rape culture, then, also exists within the current scheme of things unless we call out just how toxic and dangerously problematic the current situation is.

Instead of re-enforcing delusional stereotypes such as “this is our culture”; “this is how things have always operated” and the age old “this is how men are”, we need to for once consider that God did not create men with an automatic urge to rape.

Also considering that three minor boys, aged eight to 12 years, were raped and murdered in Kasur it is plain to see that the heinous crime is not limited to the female gender. Young boys are frequently raped and despite the prevalent cases of sexual abuse of children in Kasur, there are still no tangible mechanisms in place to implement child protection laws. In fact, the saddest part is that pedophilia is considered a social and cultural norm in some parts of Pakistan. Moreover, Madrassas in Pakistan are notoriously known to be places of child abuse.

And we wake up again briefly. As everyone one woke up in 2013. As everyone woke up for Zainab. A brief peek, some noise and then oblivious sleep while more kids are killed, abused, rape. No plan in place. Ridiculous. When will CHILDREN MATTER ENOUGH @pid_gov When will you LISTEN!

#Kasur it’s trending&it’s a shame for all of us.we all have failed as a civilised society. As a parent I can feel those 3 kids parent’s pain. It’s terrible&brutal.immediate action should be taken,Culprits should be hanged publicly.Our children are our future save them please

There has been a slight increase in the reporting of rape cases against women of late but cases of male rape get lost in the larger context of the patriarchal society and are not treated with the seriousness they deserve. The society, it seems does not want to discuss how rape and sexual abuse have more to do with power rather than unbridled lust.

Filing a first person report (FIR) for rape is even more difficult for a man, as it is considered a moment of weakness for them. The society as a whole has dubbed women to be the emotional sex, while men have been completely stripped of the right to express any emotions that maybe perceived as weak. This culture continues to reinforce its patriarchal expectations of ‘manhood’ and what it really means to be a man in this world.

I am appalled to think that some people blame the way women dress when they are sexually abused and assaulted, because clothes have nothing to do with being attacked. It is the deep misogynistic ideals that we are taught to live with while growing up that let us believe men can get away with anything, especially when it comes to misusing their male privilege.

When women are raped, many people say they shouldn’t have stepped out of the house but what about the men? Which also proves my point again- rape has nothing to do with how one dresses or what gender the victim is. There is a dire need to address the root cause of this power struggle that is hurting so many men, women and children in our country and I’m not sure how long it will take to really understand the importance to destroying the current system in order to rebuild a safer space for our citizens.