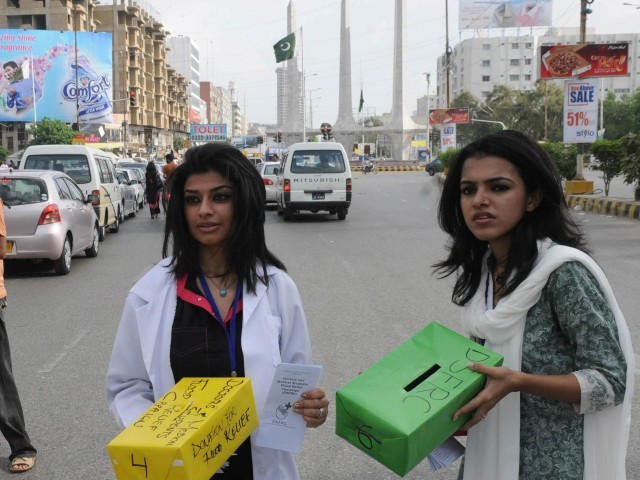 Before leaving one’s comfort zone to volunteer it is important to be prepared. PHOTO: IRFAN ALI

There’s much to be said about the spirit of volunteerism and philanthropy, so deeply ingrained in desi culture. In a material world, it’s great to see people making the effort to venture beyond their personal spheres.

Before leaving one’s comfort zone, however, it might be important to be a little prepared. This is true not only for the good-hearted burger-bachas, but also their proactive supervisors, armed to the teeth with terrifyingly good intentions.  After squirming in my shoes watching just such an army of angels at work, I thought it might be useful to have a Community Service Orientation Pack, to ease the transition for people like you and me.

2. If you want to be able to integrate, leave bold fashion statements for a different day. Girls – even if you don’t want to cover your heads, taking a dupatta along might make people feel like they’re dealing with less of a ‘mem sahib’ (wealthy woman).

3. Know what you’re going to do. If you’re going to spread ‘public service messages’, make sure they haven’t been spread already. Repetition is not always effective, it can get annoying.

5. Try not to stand in awkward groups, whispering amongst yourselves. Be interested in introductions, and if there’s nothing to say afterwards then silence isn’t such a terrible thing.

6. Please don’t pity the ‘less fortunate’. Take your time to talk to them, you might make friends. Cricket is generally a safe topic to start with or even – wait for it – the weather. It’s suddenly so cold, yes, winter is here.

7. Try to communicate in Urdu or the local language if you know it.

8. If you have something to give, let it be given in the most natural way possible. Take pictures if you must, but let it not be just a photo opportunity with people having to pose multiple times. If you want to take photos, ask for permission.

9. A good facilitator will help break the ice, and will not be talking about the communities in front of them. People can generally hear when this is happening.

10. Don’t give your cell-phone number to strangers, even if they are much younger. Be polite in the event that you are asked, but unless there is a specific purpose, slide out of it.

It’s so very easy for many of us who read the ET blogs to be blissfully unaware of an alternate reality, one that exists beyond Gossip Girl, or great literature, or serious political talk. We all choose our own boxes and it isn’t easy to step outside them. When taking that decision, however, it just might be good to remember that one has to respect the space inside someone else’s box, in order to be welcomed into it again.