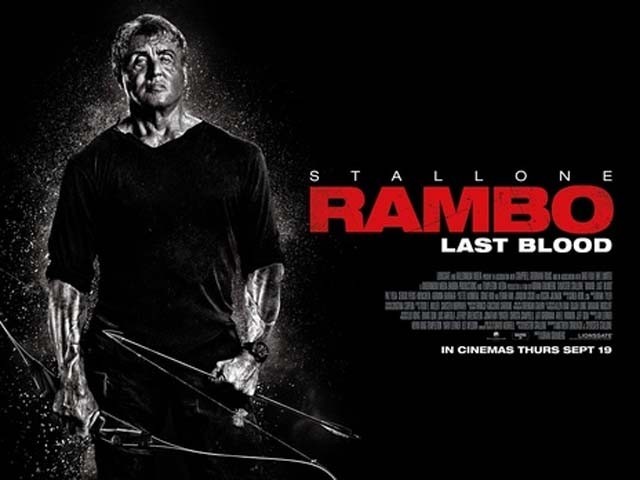 Over the course of the next three films, Rambo’s spirit was taken over by stereotypical Hollywood.PHOTO: IMDB

The final chapter of the Rambo series was released this week, called Rambo: Last Blood. Fans of the series, including me had high hopes from the movie considering the unique story line it introduced years ago through Ted Khotcheff’s, First Blood. Nevertheless, after watching the movie, it became nearly impossible to believe that the series began not as a franchise but as a smartly made, action-packed and contemplative stand-alone film.

The series opened with a distinctive plot about a soldier coming back home from the Vietnam War who is struggling to grapple with PTSD. In many ways the film offered a sobering portrayal of the life most war veterans are left with after coming home. And it still left the audience with an exciting and pulsating film that rightfully became an action classic of the time.

Over the course of the next three films though, Rambo’s spirit and the soul of author David Morrell’s original story was taken over by stereotypical Hollywood. Suddenly, he was not the edgy, brooding, PTSD-affected war vet just waiting to blow-up.

He had now turned into a gun-toting, jacked-up war veteran fighting the enemies of the United States abroad. This included the barbaric Vietnamese, the godless commies and for some strange reason the Burmese. As remarked by several film critics, Rambo quickly became an unabashed metaphor for US military excesses abroad. The series that attracted the audience through its authenticity had now become an inconceivable fiction to say the least. Despite the heavy propaganda and jingoism, the exiting action and presence of Stallone as John Rambo kept it going.  At present, when Stallone is no longer the popular movie star he used to be, the political context remains the most riveting for the audience. The series is famous for offering story lines revolving around recent world events.

This time they picked Mexico, with a not too subtle nod towards the things the US president has been saying. Sadly enough, the film’s bigoted and racist portrayal of Mexicans is not even the worst thing about it. The film finds our hero John Rambo living a quiet life on the ranch he inherited from his dad in Arizona. He’s still struggling with PTSD but seemingly content with the peaceful vibe of the dusty terrain. This changes soon, when his adopted niece tells him she’s going to Mexico to find her estranged father. Immediately upon her arrival into the country she is sold into sexual slavery. Leaving it for Rambo to get back on his metaphorical horse and rein hell on evil.

What follows is an episode of 86 minutes in which we see Rambo mutilate, amputate, stab, and disfigure any Mexican who comes his way. At best you can say that the lazy direction and derivative script actually took a backseat to the films astoundingly violent and xenophobic streak. Don’t get me wrong; I like to see violence in movies just as much as the other guy. However in Rambo: Last Blood, the level of violence and the crude nature of its execution makes it rather irritating.

A large part of the film takes place on Rambo’s ranch where he manages to lure the Mexicans during the second half of the film. This is where the film essentially turns into Home Alone meets Saw, with none of the fun of either of those films but all the absurdity and brutality you could conjure up.

The film’s one-dimensional portrayal of Mexicans plays into the larger practice of Hollywood actively perpetuating stereotypical, portrayals of nations that have bad or negative perceptions among the American public. Be it the portrayal of Pakistanis in Homeland and Zero Dark Thirty or Iranians in Argo, enforcing prejudices about things Americans don’t fully understand is an age-old staple of Hollywood.

It certainly helps that the current stereotype is perpetuated by the US president, making it easier for the Mexicans to be unfortunately portrayed as rapists, sex-traffickers and drug-peddlers whose only purpose is to end up in body bags, courtesy of the All-American hero, John Rambo. Stallone completely phones it in his last outing as Rambo. Unlike Creed where he reprised another star-making role remarkably well and with great sensitivity; here he seems disinterested. Often barely intelligible and more willing to let his bone-saw do the talking.

Considering this attitude comes from a 35-year-old, unfit war veteran shows how narrow the macho male fantasy of Hollywood is. As usual, the hero is shown waiting for some helpless women to get sexually assaulted. So he can go ‘save’ her by playing heroic acts on less privileged, weak people.

Through it all it’s almost easy to forget that Rambo is a revenge film. That there’s actually a point to Rambo brutally murdering tons of Mexicans–although a casual viewer might think otherwise given how elaborate some of the traps are. Even if one was to entertain such a thought, it can practically be thrown out of the window during the film’s final scene in which Rambo ties to persuade a Mexican journalist to give him the address of the drug kingpin behind it all. The stupidity of the scene perfectly sums up the stupidity of the film itself.