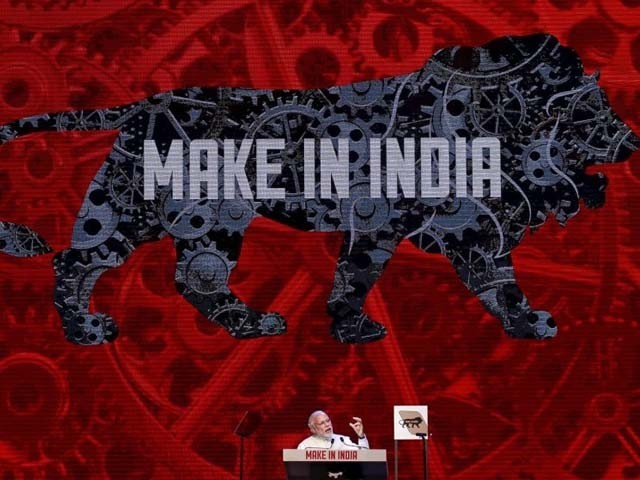 India's Prime Minister Narendra Modi speaks during the inauguration ceremony of the 'Make In India' week in Mumbai. PHOTO: REUTERS

Owing to a “weaker than expected outlook” for domestic demand in India, the International Monetary Fund (IMF) has projected that India’s growth rate will undergo a downward revision by 0.3% for the fiscal year 2019-20.

As the Indian media and government keeps deflecting rising economic concerns, the massive economic slowdown that seems to impact a vast majority of the Indian public has led to the ringing of alarm bells in some quarters. The government statistics for the first quarter of the year (Q1) showed that the Gross Domestic Product (GDP) grew by 5%, the lowest Q1 growth rate India has seen since 2012-13, when it was reeling at 4.3% in 2012-13.

For a $2.5 trillion economy like India, this is very low and should be a matter of great concern. Therefore, it isn’t surprising to see Rajiv Kumar, the head of the government’s think tank Niti Aayog, claim that the current slowdown is unprecedented in the 70 years of independent India and there must be immediate policy interventions in specific industries. This makes Narendra Modi’s assertion that he will make India a $5 trillion economy seems all the more ridiculous.

The announcements in the last few weeks clearly demonstrate that our government is leaving no stone unturned to make India a better place to do business, improve opportunities for all sections of society and increase prosperity to make India a $5 Trillion economy.

Perhaps the largest contributing factor which has helped usher in this economic crisis has been the crash in the automotive sector, which makes up around 7% of India’s GDP. Domestic car sales have fallen by 41% over the last year, and in the first five months of the financial year, the sales of passenger vehicles fell by 24%. As a result of the economic downturn in India’s automotive sector, almost every day there are headlines pertaining to plant shutdowns across the country. The likes of Ashok Leyland and Maruti Suzuki have started temporarily shutting down their plants since the falling number of car sales are simply unable to sustain the growing costs. Moreover the steady influx of Foreign Direct Investment (FDI) which has filtered into India over the last decade has fallen in 2019. If the fall in FDI does not get the relevant policy makers in India to take notice, then what will?

The Indian government has to realise that this is not normal. This kind of an economic mess, caused by poorly formulated policies and faulty decisions in the last few years, are sinking India further into an economic quagmire. What is most perplexing, however, is the indifference of the government towards these increasing economic concerns. Finance Minister Nirmala Sitaraman remains unfazed by this looming crisis. Instead, in a counterproductive exercise, Sitaraman pointed fingers at millennials, stating that they are the reason behind the slowdown in the automotive sector since the choose to travel in Ubers instead of owning their own cars. If anything, this bizarre mindset and roundabout logic is symptomatic of a growing inability of the government to draw up actual policy measures to combat the rot which is eating away at India’s economy.

Sitaraman has to realise that the economic slowdown is largely in part due to the fact that India’s economic policies have not worked. Demonetisation and a failure to increase the household income in rural India have negatively impacted Indian traders and manufacturers; while small businesses are running low on working capital, and start-up businesses have simply failed to mushroom in the last three years in the manner the government was hoping they would. If this economic slowdown continues, the country runs the risk of sliding further down towards a negative growth rate.

Under these circumstances, if an increase in money supply outpaces growth, inflation, which is currently under control, may become a looming threat. If the slowdown persists for the next two quarters it is bound to lead to a recession, provided the government recognises and acknowledges it. The Indian government needs to realise that if the economy continues on its present trajectory, the situation may begin to reflect the crisis which plagued Argentina in 2001, Venezuela in 2017 and America in 1929. If India’s current economic downturn across these various sectors perseveres in future business cycles, and if the economy doesn’t recover within the next two years, it may lead to a recession. But, the most important thing the Indian government must do before it solves this economic crisis is to first acknowledge it.