What is Article 149 really about: Karachi’s woes or PTI vs PPP? 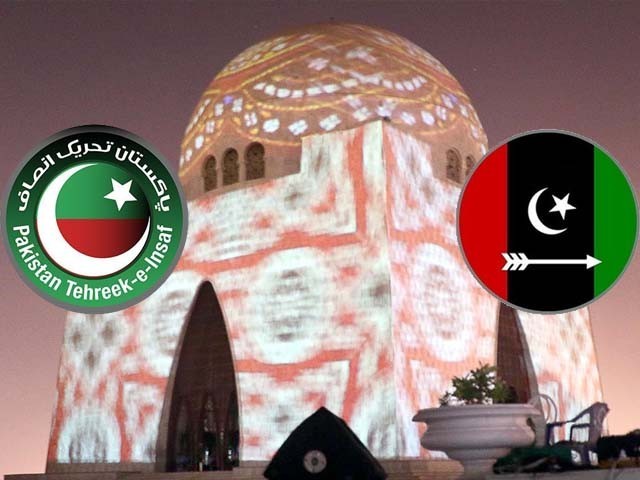 It is legally incorrect to say that Karachi’s administrative control can be transferred into the hands of the federation via Article 149 (4).

Karachi deserves better than being embroiled in a perpetual tug of war between the federal and provincial governments. Karachi’s people put up with rampant crime, non-existent waste management, inept policing, poor infrastructure and chaos when it rains on a daily basis. Hoping for change but slowly losing optimism. However, Federal Minister for Law Farogh Naseem thinks he has found the solution to these problems in the Constitution’s Article 149 (4). But the federal minister is wrong.

Directions under Article 149 (4) can only be given under certain circumstances spelled out in the text of the Constitution. The first condition is that directions pertaining to the economy must have a link with the economy of Pakistan as a whole, not limited to just the province. Second, directions can be given to prevent any ‘grave menace’ to the peace or tranquility of Pakistan. Again, as a nation. None of the reasons given by the federal government seem to be sufficient to trigger either of these two conditions. All the problems that the federal government has highlighted seem isolated to Karachi and do not seem to have national implications. This by itself should dismiss jubilations from the federal government that through Article 149 (4) they can wrestle control away from the provincial Pakistan Peoples Party (PPP).

But let’s assume that Article 149 (4) can be implemented. Does this mean that the federal government can take over the provincial administration?

This view is borne out by precedent developed by Pakistan’s courts. The Lahore High Court, in Avari Hotels versus Department of Excise and Taxation, 2009 PTD 1868 Lah, held that Article 149 (4) was for the harmonious enforcement of federal law throughout Pakistan. It did not give the federal government authority to regulate provincial law and administration. In doing so, the Lahore High Court was following precedent established by the Supreme Court of Pakistan in cases such as Iftikhar Hussain Shah versus Pakistan, 1991 SCMR 2193.

It is then legally incorrect to say that Karachi’s administrative control can be transferred into the hands of the federation via Article 149 (4). The maximum the federal government can do is give directions to the Sindh government. It is then up to the latter if it wants to follow those directions or not.

This is good segue into explaining what this whole issue is really about: Pakistan Tehreek-e-Insaf’s (PTI) inability to work with the opposition. We have seen it in Parliament where, because of PTI’s belligerent attitude towards members of the opposition, it cannot get any legislative work done. Simply put, the PTI does not want to work with the PPP. Forcing it to look for ways to circumvent them.

While it is true that the PPP has a poor track record when it comes to developing Sindh in general, the use of Article 149 (4) will solve none of Karachi’s problems. It will, however, undermine two very important things: the concept of federalism that was painstakingly hammered out by the 18th amendment. A concept that the PTI continues to show animosity towards by trying to increase the powers of the federal government. It will also undermine the votes of the people of Sindh.

Love the PPP or hate them, they have democratic legitimacy in Sindh. The people voted for them, and if the PTI respects democracy, then it must respect their mandate. Trying to find workarounds to the people’s vote does the PTI no favours.

Had Article 149 (4) given the federal government the power to take over administrative control of Sindh, I would have still urged caution. I have written before of the problems of playing ‘constitutional hardball’ i.e. using legitimate powers to attain undemocratic aims. Such actions spell the death of democracy. A proper functioning democracy requires adherence to unwritten norms just as much as written ones. One such norm is the norm of ‘forbearance,’ as I have previously explained, this means, simply, that while some person or body may have the power to do something, they are reluctant to exercise it because excessive use would damage the democratic system. In short, it means self-restraint for the greater good.

As Harvard law professors – and authors of How Democracies Die – Steven Levitsky and Daniel Ziblatt state, the reason American democracy has worked for so long is because of the restraint shown by its institutions.

I realise that this may frustrate many people, especially the people of Karachi. While they live with the city’s myriad problems, these sermons on democracy may seem like empty platitudes. But I see no method apart from slow, incremental change through the democratic process that can fix Karachi’s problems. The federal government, with its hands full with the national economic crisis, is surely not the best institution to fix Karachi.

People want radical, transformative change without realising that it is a myth. Control by the federal government cannot transform Karachi. Only by studying and appreciating the underlying issues that cause Karachi’s problems can solutions reveal themselves. That is a slow process, and is dependent upon democracy at the grassroots level. It involves strengthening local government systems in the province. And it involves people making the solutions to Karachi’s issues a necessary point for electability.

If Imran Khan and Naseem want to fix Karachi, here is what they must do: they must see the Sindh government as legitimate. That is the first step. This politics of polarisation over Karachi’s carcass moves nothing forward. Only then can the federal government and the provincial government sit together and save Karachi. Imran needs to exercise diplomacy with the Sindh government. He must make change happen from within the existing structure. One year on from the PTI’s electoral win, it is time for the PTI to realise that its political polarisation project is making the country suffer. We must work together because the people of Karachi deserve better. It bears remembering that many of Karachi’s problems exist because of the lack of provincial autonomy over decades. The federal government was so busy building Punjab that they forgot about the other parts of Pakistan.