Will the people of Kashmir accept India’s version of ‘normal’? 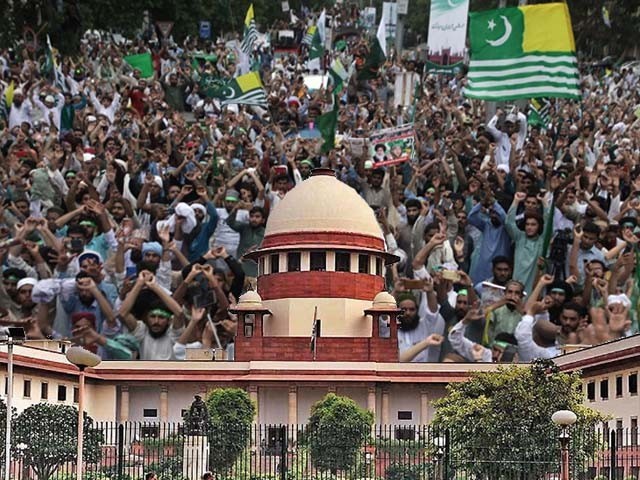 The word ‘normalcy’ is the most used and abused term in India today. Never before has this nation been so obsessed with these three syllables. Forty five days after the revocation of Article 370, Indian-occupied Kashmir (IoK) still remains paralysed, the majority of political leaders are in detention, civil society activists are under scrutiny, and the media has been asked to become the handmaid of the government.

Under this backdrop last week, while hearing petitions filed with regards to the situation in Kashmir, the Indian Supreme Court asked the state to “restore normalcy” in the region as soon as possible. A simple statement, which begs the question: is that even possible? Does New Delhi have the political willpower and the moral authority needed to restore normalcy, and will that be enough to win the hearts and minds of the people of Kashmir? Evidently, the current state of occupied Kashmir is far from normal. A Srinagar-based academician told me earlier this week, during his visit to Delhi after remaining incommunicado for over a month in the valley, that,

“The situation in Kashmir is not normal at all and no one can predict when it will be. A population has been held in complete contempt by the government, so to talk about normalcy in such a situation is not acceptable. No one can predict anything now. The Supreme Court is one of the pillars of democracy but it does not give you the impression that it has exercised its supreme rights. It should have acted promptly, but has instead delayed action. Justice delayed is justice denied.”

Indian Supreme Court has not directed the Indian Govt to lift curfew in the Indian Occupied Kashmir. It has only asked the government to restore normalcy on selective basis keeping national interest on priority. It also said it will not pass any orders on the restrictions in IOK.

Narendra Modi, it appears, has other plans. On Thursday, the Indian prime minister said that the state will work towards creating a “new paradise” in Kashmir and that the revocation of Article 370 will help unify the nation. But Modi’s statement is not meant for the people of Kashmir. Instead, it is meant to appease the mainstream Indian audience. His so-called ‘pacifist politics’ does not have any constituency in the valley. On the contrary, those who have been watching Kashmir will vouch that Modi does not enjoy any credibility in the eyes of the Kashmiri people. Ever since Modi has assumed office, the situation in occupied Kashmir has rapidly deteriorated, and resentment amongst the residents of Kashmir has reached a crescendo. It therefore seems rather foolhardy on part of the court to call for a return to normalcy when Modi has irrevocably changed the fate of the people of Kashmir.

The second, and perhaps more pertinent question which should be asked at this point in time is: why the apex court, which is the third pillar of democracy, doesn’t have the authority play a more proactive role in ensuring that the state takes measures to help bring some semblance of normalcy to Kashmir. On the face of it, the court is trying to address the Kashmir issue, but the truth of the matter is that its demands will yield no results and will continue to fall on deaf ears. But it seems like a foregone conclusion that the court will not take any necessary action. For instance, after being repeatedly denied permission to visit Kashmir, Ghulam Nabi Azad, former chief minister of Indian-occupied Kashmir, the Indian Supreme Court finally approved his visit. However, the visit comes with a stipulation. The judges stated that he can enter the region as long as he does not engage in any political activities. How any matter pertaining to Kashmir can remain “apolitical” is a question which perhaps only these judges can answer.

In India, Supreme Court permits the former Chief Minister of Jammu & Kashmir to enter the state but not indulge in political activities – These judges should take their salary and NOT indulge in giving judgements. https://t.co/EipPuLe4W6

The growing number of matters which the Indian Supreme Court will have to deliberate upon in the coming days will only further prove how committed it is to finding an actual solution to the Kashmir issue, or whether these matters are only being heard in order to present a veneer of action on part of the court. Reports about how difficult it is to access the Jammu and Kashmir High Court have been termed “very very serious” by the Indian Supreme Court. But such words of sympathy do nothing for the people of Kashmir. A willingness to listen to reports about the illegal detention of children is worthless if it does not translate into direct action. Moreover, in light of the Bharatiya Janata Party’s (BJP) proposal that the official language of IoK be changed to the Hindi script, it is more important than ever that state institutions in India play their part in ensuring that the voice of the Kashmiri people is not quelled.

Furthermore, the trampling of the media, the fear among opinion-makers as to whether they should speak out or not, and the silencing of the civil society has meant that the state has created a structural anomaly, which many believe is aimed at creating a majoritarian state. Despite whatever the Indian Supreme Court may say, South Asia is caught in the vortex of a manufactured crisis, and the biggest victim is ‘normalcy.’ Ultimately, we must ask, will the people of Kashmir accept the Indian government’s version of normal?